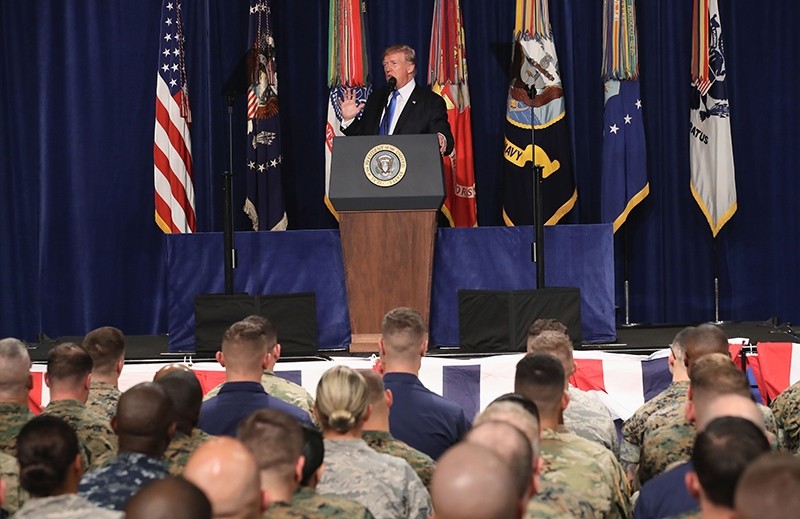 Reversing his past calls for a speedy exit, President Donald Trump recommitted the United States to the 16-year-old war in Afghanistan Monday night, declaring U.S. troops must "fight to win."

He pointedly declined to disclose how many more troops will be dispatched to wage America's longest war.

In a prime-time address to unveil his new Afghanistan strategy, Trump said the U.S. would shift away from a "time-based" approach, instead linking its assistance to results and to cooperation from the beleaguered Afghan government, Pakistan and others. He insisted it would be a "regional" strategy that addressed the roles played by other South Asian nations.

In his first formal address to the nation as commander-in-chief, Trump discarded his previous criticism of the 16-year-old war as a waste of time and money, admitting things looked different from "behind the desk in the Oval Office."

"My instinct was to pull out," Trump said as he spoke of his frustration with a war that has killed thousands of U.S. troops and cost U.S. taxpayers trillions of dollars.

But following months of deliberation, Trump said he had concluded "the consequences of a rapid exit are both predictable and unacceptable" leaving a "vacuum" that terrorists "would instantly fill."

The 8,400 US personnel currently in-country are largely restricted to NATO's mission of training the Afghan Army and offering strategic support on certain missions, though some are already conducting frontline operations. 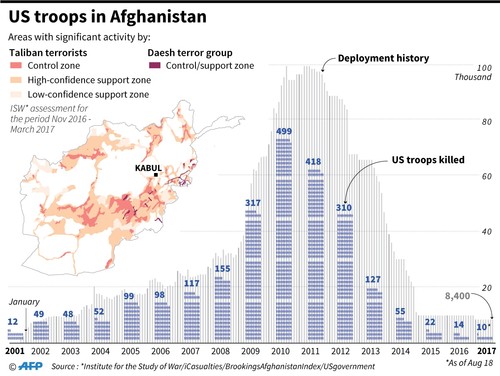 Experts, however, expressed doubt that new deployments will make a difference. Former President Barack Obama authorized a massive surge that saw troop numbers top out at over 100,000, a move that decreased violence but did not result in a decisive blow.

If the might of the U.S. military could not defeat the militants then, many analysts argue that 12,500 are unlikely to secure a lasting victory.

"Probably the greatest contradiction that emerged from (the speech) is the claim we will learn from history and yet none of the policies have not been tried before," said James Der Derian of the Centre for International Security Studies at the University of Sydney.

Others point out however that Afghan forces are now at a point where a smaller number of advisers more strategically deployed could make a difference.

He warned that the approach would now be more pragmatic than idealistic. Security assistance to Afghanistan was "not a blank check" he said, warning he would not send the military to "construct democracies in faraway lands or create democracies in our own image."

"We are not nation building again. We are killing terrorists."

The U.S. has grown increasingly weary of the conflict that began in October 2001 as a hunt for the 9/11 attackers has turned into a vexed effort to keep Afghanistan's divided and corruption-hindered democracy alive amid a brutal Taliban insurgency.

Meanwhile, the group vowed to continue its fight "until the last breath," in response to Trump's announcement of a new strategy for Afghanistan, promising that it would make the country "a graveyard" for the U.S. and would continue fighting as long as American troops remained in the country.

"If America doesn't withdraw its troops from Afghanistan, soon Afghanistan will become another graveyard for this superpower in the 21st century," Zabiullah Mujahid, a spokesman for the Taliban in Afghanistan, said in a statement.

Trump for the first time also left the door open to an eventual political deal with the Taliban.

"Someday, after an effective military effort, perhaps it will be possible to have a political settlement that includes elements of the Taliban in Afghanistan," he said.

"But nobody knows if or when that will ever happen," he added, before vowing that "America will continue its support for the Afghan government and military as they confront the Taliban in the field."

His Secretary of State Rex Tillerson went further, saying the U.S. would "stand ready to support peace talks between the Afghan government and the Taliban without preconditions."

The Trump administration had originally promised a new Afghan plan by mid-July, but Trump was said to be dissatisfied by initial proposals to deploy a few thousand more troops.

His new policy will raise questions about what, if anything, can be achieved by making further deployments, or repeating the demands of previous administrations in more forceful terms.

In 2010, the U.S. had upwards of 100,000 military personnel deployed to Afghanistan. Today that figure is around 8,400 U.S. troops and the situation is as deadly as ever.

More than 2,500 Afghan police and troops have been killed already this year.

Trump's announcement comes amid a month of serious turmoil for his administration, which has seen several top White House officials fired and revelations that members of Trump's campaign are being investigated by a federal grand jury.

He sought in his address to convince Americans weary of his controversial off-the-cuff remarks.

"I studied Afghanistan in great detail and from every conceivable angle," he said, hoping to show he has sufficiently pondered the decision to send more young Americans into mortal danger.

One of the main voices arguing for withdrawal, Trump's nationalistic chief strategist Steve Bannon, was removed from his post on Friday.

His strategy did however win over national security-focused Republicans with whom he has had strained relations, such as influential Senator John McCain.