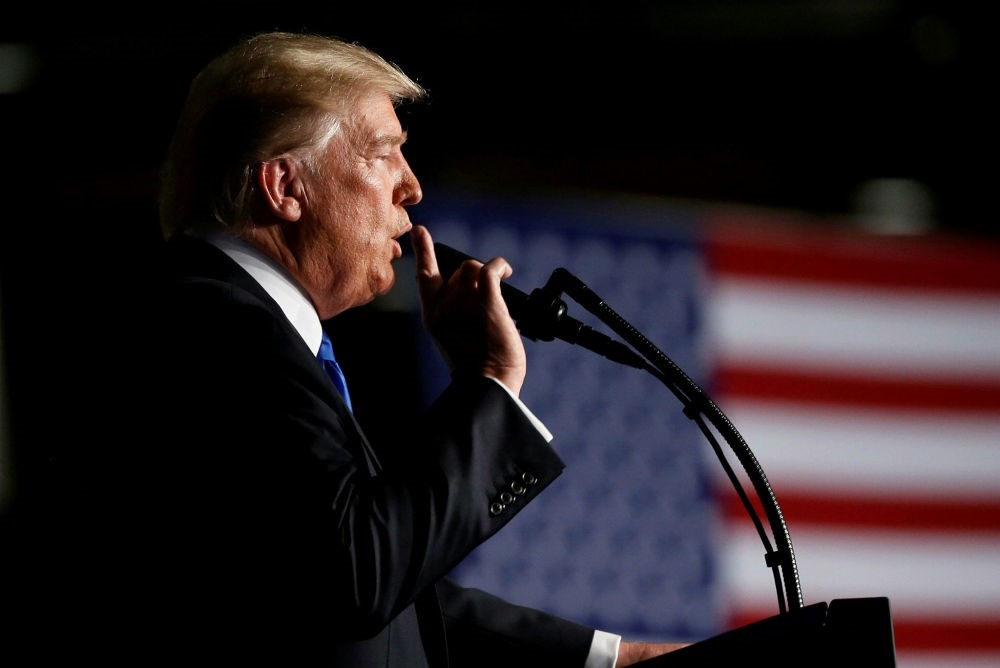 U.S. President Donald Trump announces his strategy for the war in Afghanistan during an address from Fort Myer, Virginia, Aug. 21.
by Compiled from Wire Services Aug 23, 2017 12:00 am

President Trump committed the United States to an open-ended conflict in Afghanistan, reversing course from his campaign pledges and signaling he would send troops to America's longest war

Having run for the White House last year on a pledge to withdraw swiftly from Afghanistan, President Trump reversed course on Monday and promised a stepped-up military campaign against Taliban insurgents, saying: "Our troops will fight to win".

U.S. officials said he had signed off on plans to send about 4,000 more U.S. troops to add to the roughly 8,400 now deployed in Afghanistan.

But his speech did not define benchmarks for successfully ending the war that began with the U.S.-led invasion of Afghanistan in 2001, and which he acknowledged had required an "extraordinary sacrifice of blood and treasure".

"We will ask our NATO allies and global partners to support our new strategy, with additional troops and funding increases in line with our own. We are confident they will," Trump said.

That comment signaled he would further increase pressure on U.S. partners who have already been jolted by his repeated demands to step up their contributions to NATO and his description of the alliance as "obsolete" - even though, since taking office, he has said this is no longer the case.

NATO chief Jens Stoltenberg welcomed Trump's plan to send additional troops to Afghanistan, saying the alliance would not let the country become a haven for terrorists. "Our aim remains to ensure that Afghanistan never again becomes a safe haven for terrorists who would attack our own countries," he said in a statement.

"I welcome President Trump's new, conditions-based approach to Afghanistan and the region," Stoltenberg added, noting that NATO has over 12,000 soldiers stationed in the country.

Russia does not believe that U.S. President Donald Trump's new strategy on Afghanistan will lead to any significant positive changes in the country, the Interfax news agency cited an unnamed Russian Foreign Ministry source as saying yesterday.

Afghan President Ashraf Ghani welcomed the strategy saying it would expand the training mission for Afghan forces, which includes building its fledgling air force and doubling the size of the Afghan special forces. "I am grateful to President Trump and the American people for this affirmation of support ... for our joint struggle to rid the region from the threat of terrorism," Ghani said in a statement.

The Taliban swiftly condemned Trump's decision. "If the U.S. does not pull all its forces out of Afghanistan, we will make this country the 21st century graveyard for the American empire," Taliban spokesman Zabihullah Mujahid said in a statement. A U.N. report into the Taliban insurgency said that in the first half of the year, the Afghan capital accounted for the highest number of civilian casualties in the country at 19 percent.

The rise of Daesh, which has frequently targeted Shiites, has fueled the specter of more such assaults. Daesh in Afghanistan has established a stronghold in the region, which borders Pakistan. U.S. military officials estimate there are about 600 to 800 Daesh fighters in Afghanistan, mostly in Nangarhar, but also in the neighboring province of Kunar.