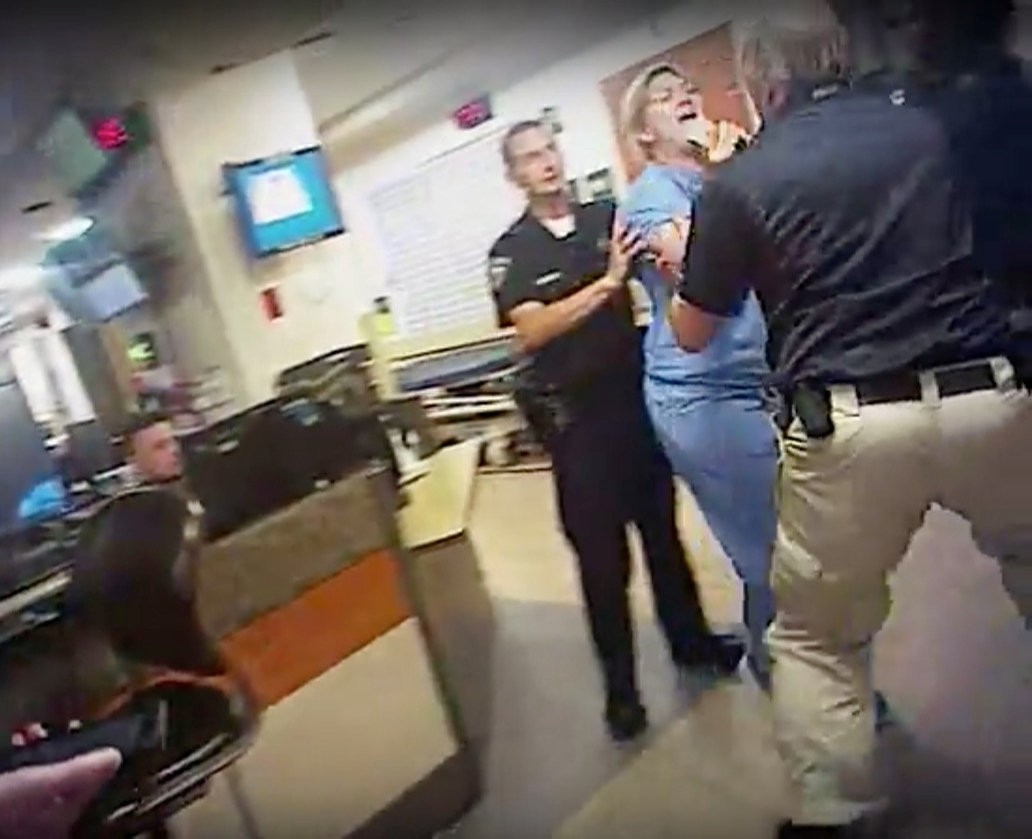 Utah officer who dragged, arrested nurse after she refused to draw blood from unconscious patient put on leave https://t.co/58uOoD17sb pic.twitter.com/7xwE05tMKh

Police in the U.S. state of Utah have launched an investigation after video footage showed an officer forcibly arresting a nurse for refusing to draw blood from an unconscious patient.

At least two police department employees, including the officer involved, have been placed on administrative leave pending the investigation, the department said.

"I was alarmed by what I saw in the video with our officer," Police Chief Mike Brown said.

"To date, we have suspended the officer from the blood draw program. We have already replaced our blood draw policy with a new policy," he added.

In an update on Twitter, the police department said two employees have been put on administrative leave pending the investigation.

"All remaining officers on the blood draw program have reviewed, and are operating under, the new policy and protocol."

District attorney Sim Gill issued a statement on Facebook calling for a full criminal investigation, however.

"This cop bullied me. He bullied me to the utmost extreme," Wubbels said in an interview with The Associated Press. "And nobody stood in his way."

Wubbels, a former alpine skier who competed in the 1998 and 2002 Winter Olympics, said she adhered to her training and hospital protocols to protect the rights of a patient who could not speak for himself.

"You can't just take blood if you don't have a legitimate concern for something to be tested," Wubbels said. "It is the most personal property I think that we can have besides our skin and bones and organs."

Payne didn't return messages left at publicly listed phone numbers, and the Salt Lake Police Association union did not respond to messages for comment. The department and a civilian board also are conducting reviews.

Police body-camera video shows Wubbels, who works in the burn unit, calmly explaining that she could not take blood from a patient who had been injured in a deadly car accident, citing a recent change in law. A 2016 U.S. Supreme Court ruling said a blood sample cannot be taken without patient consent or a warrant.

Wubbels told Payne that a patient had to allow a blood sample to determine intoxication or be under arrest. Otherwise, she said police needed a warrant. Police did not, but Payne insisted.

The dispute ended with Payne saying, "We're done, you're under arrest" and pulling her outside while she screamed and said, "I've done nothing wrong!"

He had called his supervisor and discussed the time-sensitive blood draw for over an hour with hospital staff, police spokeswoman Christina Judd said.

"It's not an excuse. It definitely doesn't forgive what happened," she said.

Payne wrote in a police report that he grabbed Wubbels and took her outside to avoid causing a "scene" in the emergency room. He said his boss, a lieutenant whose actions also were being reviewed, told him to arrest Wubbels if she kept interfering.

The detective left Wubbels in a hot police car for 20 minutes before realizing that blood had already been drawn as part of treatment, said her lawyer, Karra Porter. Wubbels was not charged.

"This has upended her worldview in a way. She just couldn't believe this could happen," Porter said.

Wubbels and her attorneys on Thursday released the video they obtained through a public records request to call for change. She has not sued, but that could change, said attorney Jake Macfarlane.

Wubbels told journalists she felt betrayed and angry at her treatment when she was only trying to keep her patient safe.

In a subsequent statement, she said the city's mayor and police chief had both extended personal apologies for her treatment. "I have accepted those apologies," she said.

"The outpouring of support has been beyond what I could have imagined," she said. "Since the incident, the city has taken this matter seriously, and I believe that positive change will occur."

Salt Lake County District Attorney Sim Gill said that the video was concerning and called the police chief to ask for a criminal investigation.

The department is open to the inquiry that will be run by Salt Lake County's Unified Police, Judd said. Gill's office will review the findings.

In response to the incident, Judd said the department updated its blood-draw policy last week to mirror what the hospital uses. She said officers have already received additional training.

The agency has met with hospital administration to ensure it does not happen again and to repair ties.

"There's a strong bond between fire, police and nurses because they all work together to help save lives, and this caused an unfortunate rift that we are hoping to repair immediately," Judd said.

The hospital said it's proud of the way Wubbels handled the situation.

The patient was a victim in a car crash and Payne wanted the blood sample to show he had done nothing wrong, according to the officer's written report.

The patient, William Gray, is a reserve police officer in Rigby, Idaho, according to the city's police. They thanked Wubbels for protecting his rights.

Gray is a semi-truck driver and was on the road when a pickup truck fleeing from authorities slammed into him and his truck burst into flames, police reports say.