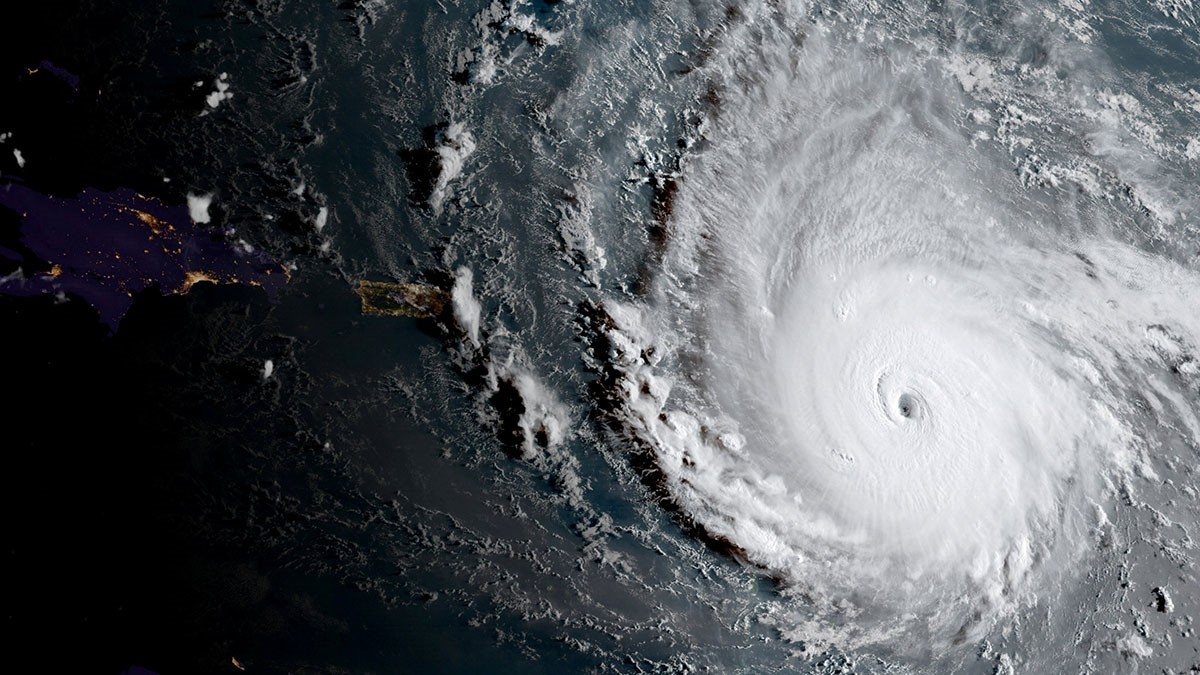 A handout photo made available by the National Oceanic and Atmospheric Administration (NOAA) shows a geocolor image of Hurricane Irma captured by NOAA's GOES-16 satellite as it strengthened to a Category 5 hurricane in the Central Atlantic Ocean.
by Compiled from Wire Services Sep 06, 2017 12:00 am

The Category Five hurricane has "blown the roofs" off of buildings, caused flooding and cut communications between Paris and the French-run islands of Saint Barthelemy and Saint Martin, Girardin said after a cabinet meeting in Paris.

Irma slammed into the islands after first making landfall on the island of Barbuda to the southeast, with the French weather office saying: "These islands are suffering major impacts."

The hurricane has caused major flooding in low-lying areas, and coastlines are being "battered extremely violently" by the sea, it said.

But its monitoring equipment has since been destroyed by the hurricane, it said.

French Interior Minister Gerard Collomb also said that government buildings on the island of Saint Martin – the most sturdy built there – had been destroyed.

"We know that the four most solid buildings on the island have been destroyed which means that more rustic structures have probably been completely or partially destroyed," he told reporters.

The regional authority for Guadeloupe and neighboring islands said in a statement that the fire station in Saint Barthelemy is under 1 meter (more than 3 feet) of water and no rescue vehicles can move.

The most powerful Atlantic Ocean hurricane in recorded history made its first landfall in the islands of the northeast Caribbean early Wednesday, churning along a path pointing to Puerto Rico, the Dominican Republic, Haiti and Cuba before possibly heading for Florida over the weekend.

The eye of Hurricane Irma passed over Barbuda around 1:47 a.m., the National Weather Service said. Residents said over local radio that phone lines went down. Heavy rain and howling winds raked the neighboring island of Antigua, sending debris flying as people huddled in their homes or government shelters.

Officials warned people to seek protection from Irma's "onslaught" in a statement that closed with: "May God protect us all."

The Category 5 storm had maximum sustained winds of 185 mph (295 kph), according to the U.S. National Hurricane Center in Miami. Its forecast late Tuesday was for the winds to fluctuate slightly but for the storm to remain at Category 4 or 5 strength for the next day or two. The most dangerous winds, usually nearest to the eye, were forecast to pass near the northern Virgin Islands and near or just north of Puerto Rico through the day Wednesday. 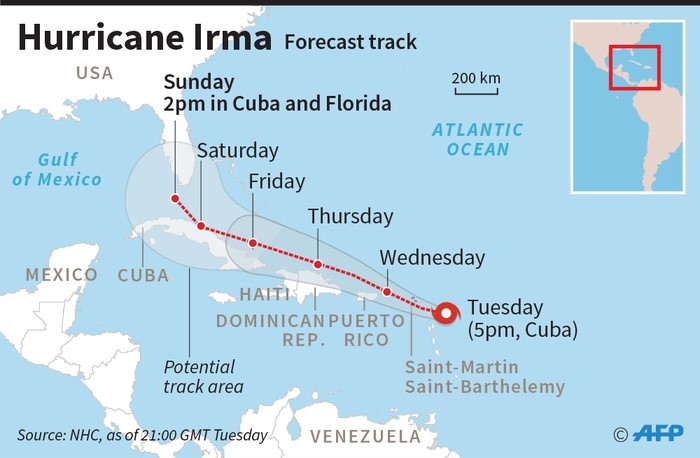 "I hear it's a Cat 5 now and I'm terrified," Antigua resident Carol Joseph said as she finished her last trip to the supermarket before seeking shelter. "I had to come back for more batteries because I don't know how long the current will be off."

On the 108-square-mile island, people who live in low-lying areas were staying with friends and relatives on higher ground or sleeping in churches, schools and community facilities built to withstand hurricanes. None of the shelters have yet been tested by Category 5 winds, however.

Many homes in Antigua and Barbuda are not built on concrete foundations or have poorly constructed wooden roofs that are susceptible to wind damage. Other islands in the path of the storm included the Virgin Islands and Anguilla, a small, low-lying territory of about 15,000 people.

President Donald Trump declared emergencies in Florida, Puerto Rico and the U.S. Virgin Islands, and authorities in the Bahamas said they would evacuate six southern islands.

Warm water is fuel for hurricanes and Irma is over water that is 1.8 degrees (1 degree Celsius) warmer than normal. The 79 degree (26 Celsius) water that hurricanes need goes about 250 feet deep (80 meters), said Jeff Masters, meteorology director of the private forecasting service Weather Underground.

Four other storms have had winds as strong in the overall Atlantic region but they were in the Caribbean Sea or the Gulf of Mexico, which are usually home to warmer waters that fuel cyclones. Hurricane Allen hit 190 mph in 1980, while 2005's Wilma, 1988's Gilbert and a 1935 great Florida Key storm all had 185 mph winds.

The northern Leeward Islands were expected to see waves as high as 11 feet, while the Turks and Caicos Islands and southeastern Bahamas could see towering 20-foot waves later in the week, forecasters said.

"This is not an opportunity to go outside and try to have fun with a hurricane," U.S. Virgin Islands Gov. Kenneth Mapp warned. "It's not time to get on a surfboard."

Bahamas Prime Minister Hubert Minnis said his government was evacuating the six islands in the south because authorities would not be able to help anyone caught in the "potentially catastrophic" wind, flooding and storm surge. People there would be flown to Nassau starting Wednesday in what he called the largest storm evacuation in the country's history.

"The price you may pay for not evacuating is your life or serious physical harm," Minnis said.

The National Weather Service said Puerto Rico had not seen a hurricane of Irma's magnitude since Hurricane San Felipe in 1928, which killed a total of 2,748 people in Guadeloupe, Puerto Rico and Florida.

"The dangerousness of this event is like nothing we've ever seen," Puerto Rico Gov. Ricardo Rossello said. "A lot of infrastructure won't be able to withstand this kind of force."

The director of the island's power company has warned that storm damage could leave some areas without electricity for about a week and other, unspecified areas for four to six months. The utility's infrastructure has deteriorated greatly during a decade-long recession, and Puerto Ricans experienced an island-wide outage last year.

Government officials began evacuations and urged people to finalize all preparations as store shelves emptied out around Puerto Rico.

"The decisions that we make in the next couple of hours can make the difference between life and death," Rossello said. "This is an extremely dangerous storm."

The eye of the storm was expected to roar westward on a path taking it north of more heavily populated Puerto Rico, the Dominican Republic, Haiti and Cuba, but it could still cause life-threating storm surges, rains and mudslides.

The northern parts of the Dominican Republic and Haiti could see 10 inches of rain, with as much as 20 inches in the southeast Bahamas and Turks and Caicos.

The storm seemed almost certain to hit the United States by early next week.

"You'd be hard pressed to find any model that doesn't have some impact on Florida." said University of Miami senior hurricane researcher Brian McNoldy.

In Florida, people also stocked up on drinking water and other supplies.

Gov. Rick Scott activated 100 members of the Florida National Guard to be deployed across the state, and 7,000 National Guard members were to report for duty Friday when the storm could be approaching the area. On Monday, Scott declared a state of emergency in all of Florida's 67 counties.

Officials in the Florida Keys geared up to get tourists and residents out of Irma's path, and the mayor of Miami-Dade county said people should be prepared to evacuate Miami Beach and most of the county's coastal areas.

Mayor Carlos Gimenez said the voluntary evacuations could begin as soon as Wednesday evening. He activated the emergency operation center and urged residents to have three days' worth of food and water.

A new tropical storm also formed in the Atlantic on Tuesday, to the east of Irma. The hurricane center said Tropical Storm Jose was about 1,330 miles (2,140 kilometers) east of the Lesser Antilles late Tuesday and its maximum sustained winds had risen to 50 mph (85 kph). It was moving west-northwest at 14 mph (22 kph) and could become a hurricane by Wednesday night.

Meanwhile, a tropical depression formed in the southwestern Gulf of Mexico off the coast of Mexico. The hurricane center said the system could become a tropical storm while meandering in the Gulf for several days before making landfall in Mexico on Saturday.