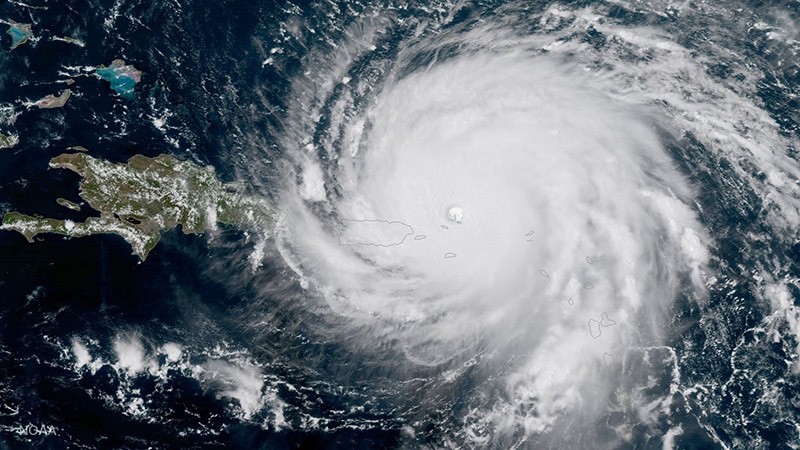 A handout photo made available by the National Oceanic and Atmospheric Administration shows a satellite geocolor image of Hurricane Irma at about 3:15pm (eastern time, ET), as it approaches Puerto Rico, in the Atlantic Ocean, 06 Sep 2017. (EPA Photo)
by Compiled from Wire Services Sep 07, 2017 12:00 am

Hurricane Irma, described as one of the most powerful Atlantic storms in a century, has killed at least eight people and injured 23 others in the French Caribbean island territory of Saint Martin, France's Interior Minister Gérard Collomb said Thursday.

"This is not, by far, a definitive number...we have not explored all the parts of the island," Guadeloupe prefect Eric Maire told reporters, adding the death toll was likely to rise in the next few hours.

Hurricane Irma had previously been described as a "potentially catastrophic" storm placed in Category 5, the highest U.S. classification for hurricanes.

It has also blacked out much of Puerto Rico as the dangerous Category 5 storm raked the U.S. territory with heavy wind and rain while staying just out to sea, and it headed early Thursday toward the Dominican Republic and Haiti.

More than half the island was without power, leaving 900,000 in the dark and nearly 50,000 without water, Puerto Rico's emergency management agency said in the midst of the storm. Fourteen hospitals were using generators after losing power, and trees and light poles were strewn across roads.

To the east, authorities struggled to get aid to small Caribbean islands devastated by the storm's record 185 mph (298 kph) winds earlier Wednesday, while people in Florida rushed to get ready for a possible direct hit on the Miami area.

Antigua and Barbuda Prime Minister Gaston Browne said nearly every building on Barbuda was damaged when the hurricane's core crossed almost directly over the island early Wednesday and about 60 percent of the island's roughly 1,400 people are homeless.

He said a 2-year-old child was killed as a family tried to escape a damaged home during the storm.

The tourist board for the Caribbean island of Anguilla said the major resorts on the island survived a hit from Hurricane Irma but many private homes have been damaged.

It also said that the airport did not sustain any major damage but that it remains closed along with two ports.

The U.S. National Hurricane Center predicted Irma would remain at Category 4 or 5 for the next day or two.

The storm is expected to hit Florida sometime Sunday, and Gov. Rick Scott said he planned to activate 7,000 National Guard soldiers by Friday. He warned that Irma is "bigger, faster and stronger" than Hurricane Andrew, which wiped out entire neighborhoods in south Florida 25 years ago.

Experts worried that Irma could rake the entire Florida east coast from Miami to Jacksonville and then head into Savannah, Georgia, and the Carolinas, striking highly populated and developed areas.

"This could easily be the most costly storm in U.S. history, which is saying a lot considering what just happened two weeks ago," said Brian McNoldy, a hurricane researcher at the University of Miami.