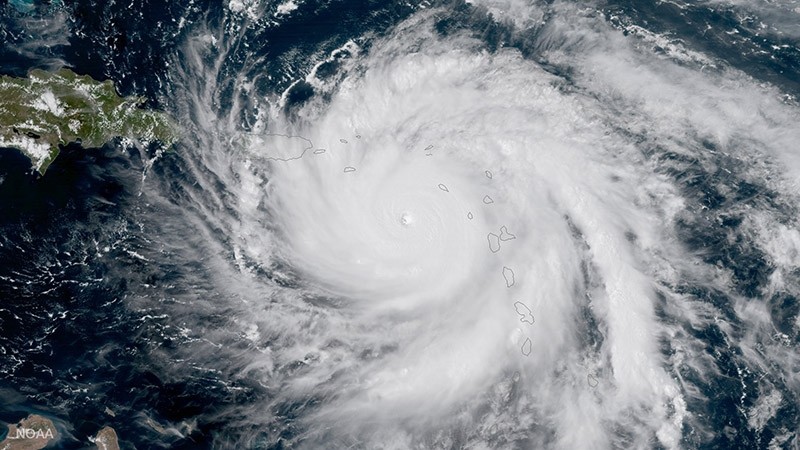 A handout photo made available by the National Oceanic and Atmospheric Administration (NOAA) shows a geocolor image acquired by the NOAA GOES-16 satellite of Hurricane Maria. (EPA Photo)
by Compiled from Wire Services Sep 20, 2017 12:00 am

The eye of Hurricane Maria made landfall in Puerto Rico early Wednesday, pummeling the island as a Category 4 storm with winds of 155 miles (250 kilometers) per hour, the U.S. National Hurricane Center (NHR) said.

The hurricane is about 35 miles (55 km) southeast of San Juan, Puerto Rico with maximum sustained winds of 155 miles per hour (250 km per hour), the NHC said, adding that it is moving in a north-westerly direction at 10 mph (17 km/h).

"This is going to be an extremely violent phenomenon," Gov. Ricardo Rossello said. "We have not experienced an event of this magnitude in our modern history."

The number of power outages spiked as Maria approached.

Maria ties for the eighth strongest storm in Atlantic history, when measured by wind speed. Coming in second is this year's Irma, which had 185 mph (300 kph) winds and killed 38 people in the Caribbean and another 36 in the U.S. earlier this month.

Puerto Rico had long been spared from a direct hit by hurricanes that tend to veer north or south of the island. The last Category 4 hurricane landfall in Puerto Rico occurred in 1932, and the strongest storm to ever hit the island was San Felipe in 1928 with winds of 160 mph.

As Maria approached, U.S. President Donald Trump offered his support via Twitter: "Puerto Rico being hit hard by new monster Hurricane. Be careful, our hearts are with you- will be there to help!"

More than 4,400 people were in shelters by late Tuesday, along with 105 pets, Rossello said.

Maria killed one person in the French Caribbean island of Guadeloupe when a tree fell on them Tuesday, and two people aboard a boat were reported missing off La Desirade island, just east of Guadeloupe, officials said.

About 40 percent of the island — 80,000 homes — were without power and flooding was reported in several communities.

The storm also blew over the tiny eastern Caribbean island of Dominica late Monday, where Prime Minister Roosevelt Skerrit sent out a series of dramatic posts on his Facebook page, including that his own roof had blown away.

"The winds are merciless! We shall survive by the grace of God," Skerrit wrote before communications went down.

The storm knocked out communications for the entire island, leaving anyone outside Dominica struggling to determine the extent of damage, though it was clearly widespread. "The situation is really grave," Consul General Barbara Dailey said in a telephone interview from New York.

She said she lost contact with the island about 4 a.m. At that point, officials had learned that 70 percent of homes had lost their roofs, including her own.

Flooding was a big concern, given the island's steep mountains, cut through with rivers that rage even after a heavy rain. Dominica was still recovering from Tropical Storm Erika, which killed 30 people and destroyed more than 370 homes in August 2015.

Forecasters said the storm surge from Maria could raise water levels by 6 to 9 feet (1.8 to 2.7 meters) near the storm's center. The storm was predicted to bring 10 to 15 inches (25 to 38 centimeters) of rain across the islands, with more in isolated areas.

To the north, Hurricane Jose weakened to a tropical storm Tuesday night. Forecasters said dangerous surf and rip currents were likely to continue along the U.S. East Coast but said the storm was unlikely to make landfall. Big waves caused by Jose swept five people off a coastal jetty in Rhode Island and they were hospitalized after being rescued.