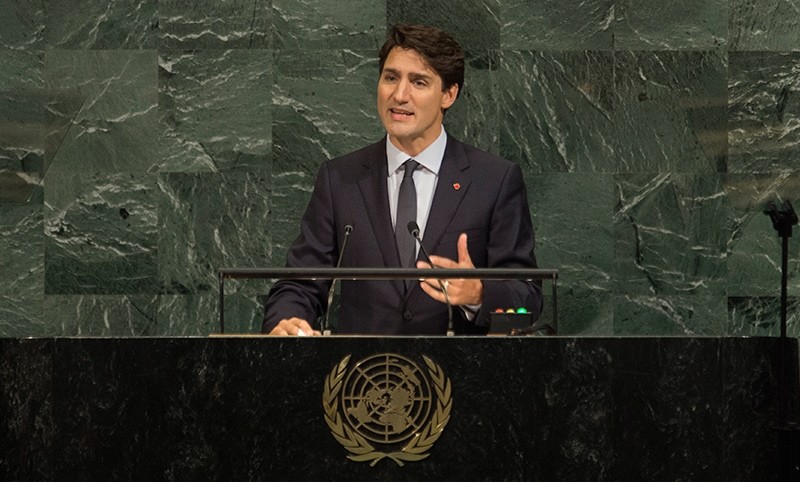 On a stage where many world leaders spotlight their successes, Canadian Prime Minister Justin Trudeau told the U.N. General Assembly on Thursday about one of his nation's historic failures: the injustices long faced by its native people.

"For indigenous peoples in Canada, the experience was mostly one of humiliation, neglect and abuse" under successive governments that didn't respect their rights, he said.

"We are greatly ashamed," Trudeau said. "And for far too many indigenous people, that lack of respect for rights still persists today."

Trudeau's speech, which detailed measures Canada has taken to right the wrongs, struck an unusual tone at the annual gathering of presidents, prime ministers and monarchs, many of whom use their U.N. speeches to boast about their countries, complain about others or discuss global flashpoints.

During their own speeches, South Korean and Chinese leaders urged North Korea to abandon its nuclear weapons and seek dialogue to prevent conflict breaking out on the divided Korean peninsula.

South Korean President Moon Jae-in voiced support for stronger sanctions in response to the North's recent weapons tests — and stronger sanctions came Thursday from the U.S., as President Donald Trump authorized new restrictions on banks and others that facilitate trade with North Korea. Days earlier, Trump issued a dark warning in his own speech to the General Assembly, threatening to "totally destroy" North Korea if forced to defend the United States or its allies.

South Korea faces the greatest immediate risk in a potential military conflict, with its capital of Seoul close to the heavily militarized frontier with the North.

"We do not desire the collapse of North Korea," Moon said, adding: "If North Korea makes a decision even now to stand on the right side of history, we are ready to assist North Korea together with the international community."

Chinese Foreign Minister Wang Yi said negotiations offer the "only way out" of the increasingly tense standoff over North Korea's nuclear program. Russian Foreign Minister Sergey Lavrov also said there was no alternative to diplomacy: "Military hysteria isn't an impasse. It's a disaster."

It is rare for a leader of Canada, a nation that prides itself on its image of tolerance and social harmony, to talk about the plight of the country's native people in a global forum.

Trudeau said after his speech that he was trying to send a strong message of accountability by acknowledging Canada's mistakes.

"If there are things we are not doing right at home, then we need to take responsibility for it," he said. He noted that he had sometimes pressed other countries to improve their human rights records, "and the response has been, 'Well, tell me about the plight of the indigenous people in Canada.' "

Many indigenous people are frustrated by the disparities between their lives and those of their fellow Canadians.

Indigenous people make up 4.3 percent of Canada's population. But the proportion of indigenous adults in jail or prison is about nine times higher than it is among other Canadians. Youth suicide rates are far higher and life expectancy is five to seven years lower than for non-indigenous Canadians.

Indigenous people in Canada didn't have the right to vote in federal elections until 1961 and were not allowed to leave a reservation without a permit until 1951. In much of the last century, 150,000 indigenous children were taken from their families to state-funded residential schools where they were barred from speaking native languages and forced to convert to Christianity. Many were beaten or abused, and up to 6,000 were said to have died, before the policy ended.

Trudeau pointed to recent progress. Investments have made water safe to drink in more than two dozen indigenous communities, and nearly 4,000 new homes are being built, he said.