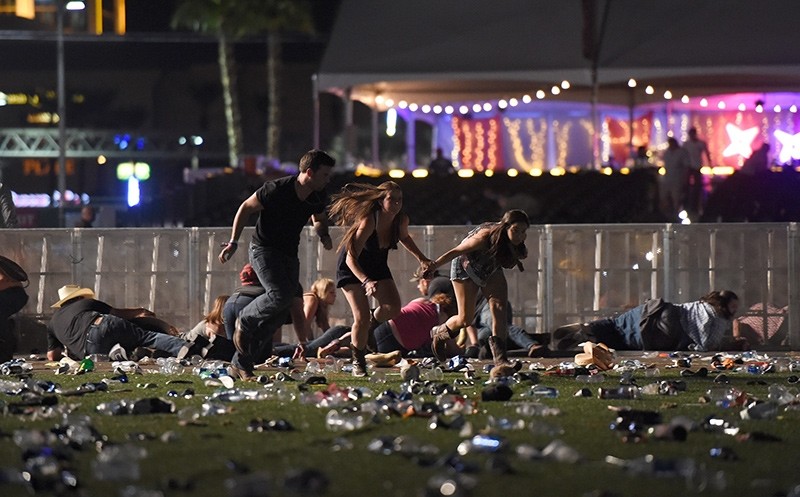 People run from the Route 91 Harvest country music festival after apparent gun fire was heard on October 1, 2017 in Las Vegas, Nevada (AFP Photo)
by Daily Sabah with Agencies Oct 02, 2017 12:00 am

At least 58 people were killed, 515 others were injured after a shooting late Sunday at a country music concert near Mandalay Bay Casino in Las Vegas, when a gunman on the 32nd floor of a hotel unleashed a shower of bullets down on people below. It was the worst mass shooting in modern U.S. history after the Orlando gay club attack, which took place in 2016 and left 49 dead.

Country music star Jason Aldean was performing Sunday night at the end of the three-day Route 91 Harvest Festival when the gunman opened fire across the street from inside the Mandalay Bay Hotel and Casino. SWAT teams quickly descended on the concert and the casino, and officers used explosives to get into the hotel room where the suspect was inside, authorities said. The gunman died at the scene and was identified by Clark County Sheriff Joseph Lombardo as Stephen Paddock. A motive was not immediately known. 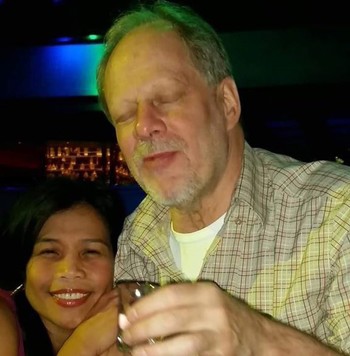 Later on, police announced that they detained Paddock's companion Mary Lou Danley in their home during raids.

Not long after Danley's detention, the Daesh terrorist group claimed responsibility for the attack through its Amaq news agency, saying the shooter (Padlock) was one of their soldiers and claimed that he had converted to Islam months ago. However, the group did not provide any evidence.

Senior U.S. officials said after the terrorist group claimed responsibility that there was no evidence Vegas shooter was connected to Daesh.

FBI also made a statement on Monday, confirming that the shooter had no connection to the terror group

Paddock was reportedly dead when officers blasted the door open into his hotel room, which was overlooking the music festival targeted in the attack, according to Las Vegas police.

A statement from the Las Vegas police said that the department's SWAT team "responded to the call, breached the hotel room and found the suspect dead."

Among those killed were two off-duty police officers who were attending the concert and two other on-duty officers were wounded, including one in critical condition, police said.

Images and footage of the incident shared on social media showed people lying down on the floor, and others fleeing the area, while police forces could be seen deployed in the area. 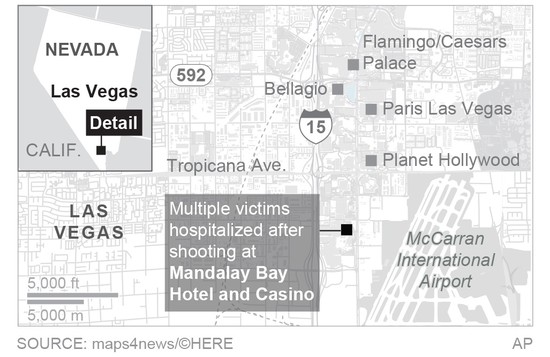 One Twitter user posted that the hotel was on lockdown, while another, citing police scanners, said two gunmen who had shot at a bodyguard and police were on the 32nd floor of the hotel.

Witnesses heard numerous gunshots at the casino hotel, where police tactical teams were searching for the attacker, according to reports on CNN and in the New York Times.

"Please avoid heading to the south end of the Strip," tweeted the city's police.

Police also reported that some flights out of McCarran Airport were delayed due to the incident. The airport lies near the southern end of the Strip.

President Donald Trump said on his Twitter account that sends symphaties to the victims and families affected by the shooting. He was briefed on the "horrific tragedy," the White House said.

My warmest condolences and sympathies to the victims and families of the terrible Las Vegas shooting. God bless you!

In May, 22 people —mostly youth- were killed in an explosion at pop star Ariana Grande's concert in Manchester, U.K., while a Daesh terrorist killed 49 people when he opened fire at a gay night club in Orlando.
Last Update: Oct 02, 2017 6:51 pm
RELATED TOPICS