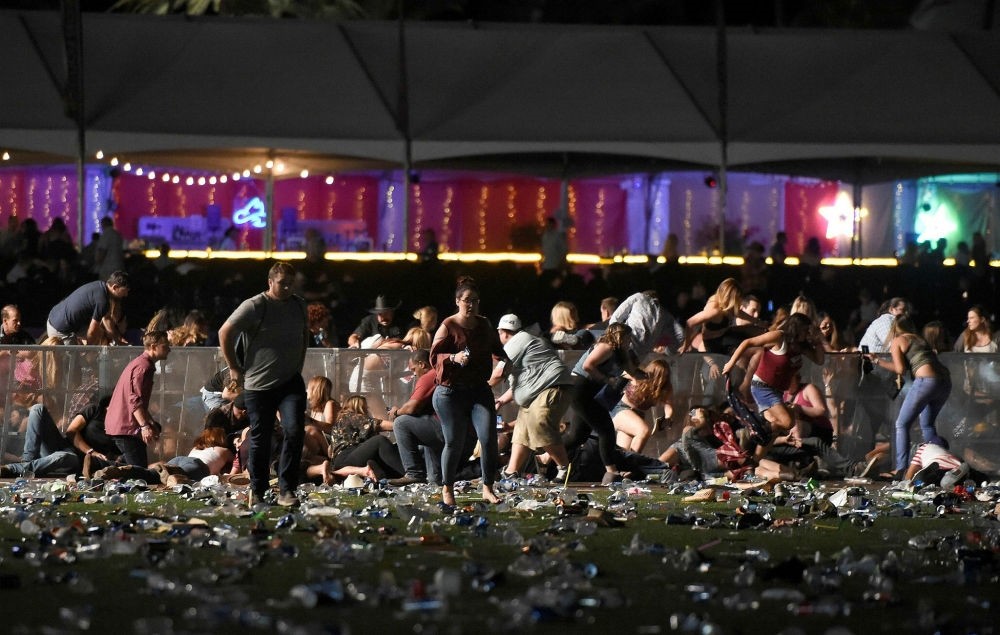 People run from the Route 91 Harvest country music festival after apparent gun fire was heard in Las Vegas, Nevada on Oct. 1.
by Compiled from Wire Services Oct 03, 2017 12:00 am

At least 50 people were killed and more than 200 wounded when a gunman opened fire on an outdoor music festival on the Las Vegas Strip in the worst mass shooting in modern U.S. history

A gunman perched high on the 32nd floor of a Las Vegas Strip casino unleashed a shower of bullets on an outdoor country music festival below, killing at least 58 people and wounding more than 500 as tens of thousands of frantic concertgoers screamed and ran for their lives, officials said yesterday.

Although the final toll has yet to be confirmed, it is already the deadliest shooting in the United States. The previous deadliest shooting came in June 2016 when 49 people were killed at the Pulse nightclub in Orlando, Florida. It was also the latest in a series of recent deadly attacks at concert venues.

The sole suspect started firing an automatic rifle from the 32nd floor of the Mandalay Bay hotel at 10:08 pm (5:08 GMT), shooting hundreds of people attending a country music festival performance by singer Jason Aldean and forcing thousands to flee.

The shooter was a white 64-year-old male named Stephen Paddock who resided in Las Vegas. "We believe the individual killed himself prior to our entry," Las Vegas Sheriff Joseph Lombardo told a news conference. He said officers found "in excess of 10 rifles" upon entering the 32nd floor hotel room from which a gunman opened fire at concertgoers below, killing at least 50 and injuring hundreds. "We do not know the shooter's belief system," the sheriff added.

Additionally, authorities are "confident, but not 100 percent sure," that Marilou Danley, an Asian female named as a person of interest in the massacre, has been found, Lombardo said. Danley is the suspected shooter's roommate.

President Donald Trump is extending condolences to the victims of the shooting in Las Vegas and their families. In a tweet yesterday, Trump offered "My warmest con

dolences and sympathies to the victims and families of the terrible Las Vegas shooting. God bless you!"

White House spokeswoman Sarah Huckabee Sanders said Trump was "briefed on the horrific tragedy in Las Vegas." Sanders said that "we are monitoring the situation closely and offer our full support to state and local officials. All of those affected are in our thoughts and prayers."

Since Trump's inauguration, there have been other mass shootings, including one in Texas last month, when a gunman killed eight and was fatally shot by police. But the Las Vegas attack is the deadliest on Trump's watch.

The president offered a measured, somber response in June, after

a shooting at a shooting at a congressional baseball practice that wounded five, including seriously injuring Rep. Steve Scalise. But he has drawn criticism for more inflammatory reactions to other acts of violence.

Before Sunday, the deadliest mass shooting in modern U.S. history took place in June 2016, when a gunman opened fire at a gay nightclub in Orlando, Florida, killing 49 people. After a shooting at a gay nightclub in Orlando that left 49 dead in 2016, he tweeted "Appreciate the congrats for being right on radical Islamic terrorism." In the wake of a deadly terror attack in London in June, Trump targeted the city's mayor on Twitter, suggesting he wasn't taking the attacks seriously enough.

Another deadliest shooting in the U.S. was the 2007 attack at Virginia Tech, in which a student killed 32 people before killing himself. Sunday's shooting came more than four months after a suicide bombing at an Ariana Grande concert in Manchester, England, that killed 22 people. Almost 90 people were killed by gunmen inspired by Daesh at the Bataclan concert hall in Paris during a performance by Eagles of Death Metal in November 2015.