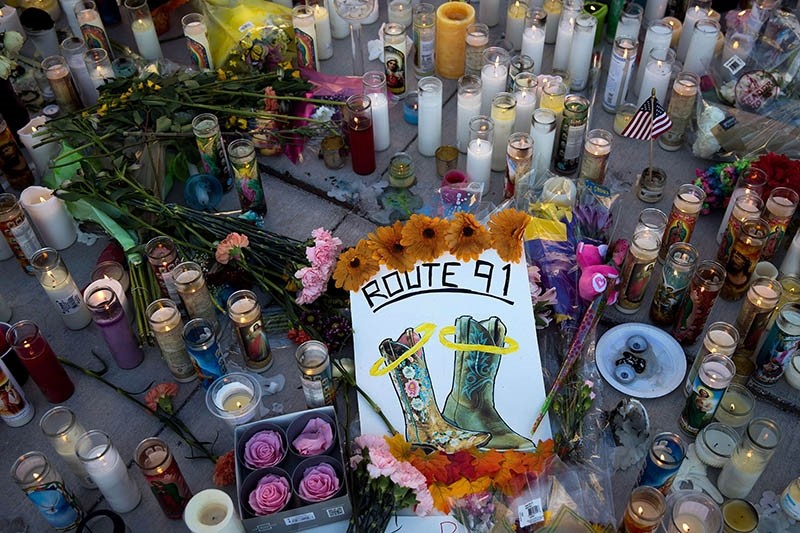 A makeshift memorial for the victims of Sunday night's mass shooting stands at an intersection of the north end of the Las Vegas Strip, October 3, 2017 in Las Vegas, Nevada, U.S. (AFP Photo)
by Daily Sabah with AFP Oct 03, 2017 12:00 am

President Donald Trump on Tuesday described the terrorist behind the Las Vegas mass shooting as a "sick," "demented" individual.

"He was a sick man. A demented man, a lot of problems," Trump told reporters as he left the U.S. capital for Puerto Rico. "We are dealing with a very, very sick individual."

Stephen Paddock, a 64-year-old gambler and retired accountant, was identified as the shooter who fired on a huge crowd at an outdoor country music concert, killing 59 and injuring over 500.

Dr. Craig Considine, a sociologist at Rice University in Texas, noted that after San Bernardino shooting that killed 14 people Trump said: "I think Islam hates us." Consodine also stressed that Paddock was not being referred to as "terrorist," but rather a "lone wolf" or "shooter."

Considine alleged that the difference laid in religious affiliation and race of the attacker, who was a white Christian male.

Many argued that double standards were being applied when it comes to labeling deadly attacks depending on race and/or religion of the perpetrator, sparking a hot debate on various platforms.

Investigators are trying to establish a motive for the deadliest mass shooting in modern U.S. history, but so far have been unable to pin down what drove Paddock to shoot into the crowds from a 32nd-floor hotel room.

Police recovered an arsenal of 23 guns, including automatic weapons, from his room at the Mandalay Bay Resort and Casino across from the concert venue. More guns, ammunition, and explosives were found during a search of Paddock's home in Mesquite, Nevada.