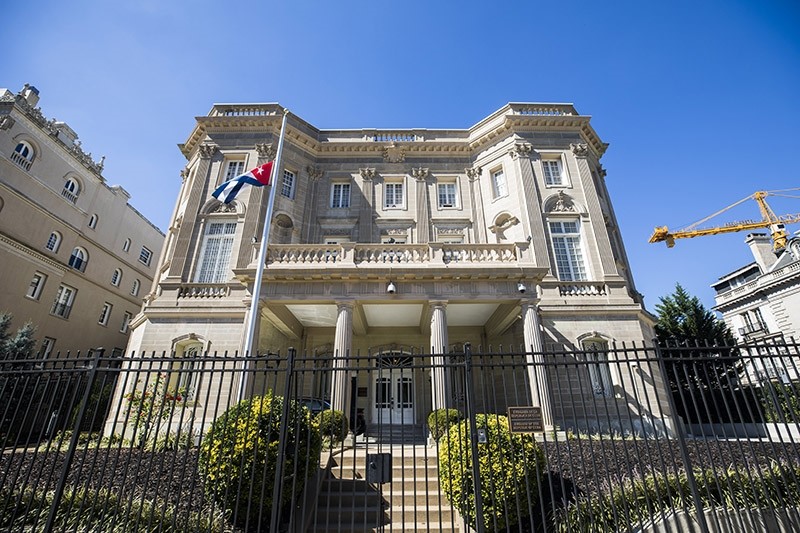 The United States expelled 15 of Cuba's diplomats Tuesday to protest its failure to protect Americans from unexplained attacks in Havana, plunging diplomatic ties between the countries to levels unseen in years.

Only days ago, the U.S. and Cuba maintained dozens of diplomats in newly re-opened embassies in Havana and Washington, powerful symbols of a warming relationship between longtime foes. Now both countries are poised to cut their embassies by more than half, as invisible, unexplained attacks threaten delicate ties between the Cold War rivals.

The State Department gave Cuba's ambassador a list Tuesday of 15 names and ordered them out within one week, officials said, in a move that aims to "ensure equity" between each nation's embassy staffing. Last week, the U.S. announced it was withdrawing 60 percent of its own diplomats from Havana because they might be attacked and harmed if they stay.

The dual moves marked a sharp escalation in the U.S. response to attacks that began nearly a year ago and yet remain unexplained despite harming at least 22 Americans — including a new victim identified this week.

Still, U.S. officials emphasized they were not accusing Cuba of either culpability or complicity, merely a failure to stop whatever is happening to Americans working out of the U.S. Embassy in Havana.

Investigators continue exploring the possibility of a "sonic attack" harming diplomats through sound waves, but have discovered no device and identified no culprit.

"We continue to maintain diplomatic relations with Cuba, and will continue to cooperate with Cuba as we pursue the investigation into these attacks," said Secretary of State Rex Tillerson.

Cuba's Embassy in Washington did not respond to multiple requests for comment. President Raul Castro's government denies involvement in the attacks, and is likely to view the move as unwarranted retaliation.

The U.S. also disclosed that the scope of the attacks has continued to grow, with a 22nd victim confirmed on Monday. In recent weeks the State Department had said there were 21 individuals "medically confirmed" to be affected by attacks that harmed their hearing, cognition, balance and vision, some with diagnoses as serious as brain injury.

The additional victim was attacked in January but wasn't confirmed to have been affected until symptoms prompted a new medical re-evaluation, said the State Department official, who briefed reporters on a conference call on condition of anonymity.

Both the U.S. and Cuba will see their diplomatic staffing in their embassies drop to the lowest levels in years.

U.S. relations with Havana were only fully restored in 2015 -- after a half-century Cold War break -- and have deteriorated since President Donald Trump took office in January.

The Cuban diplomats, who were given seven days to depart, were not declared persona non grata, a U.S. official speaking on condition of anonymity said.

Washington, he said, wants "to underscore to the Cubans that they must take more actions to protect our people on the ground."

"Our position on assurances is not presume Cuban culpability. What it does is require the Cuban government to be able to fulfill their obligations with the safety and well being and protection of foreign diplomats in their country."

The U.S. diplomats leaving Cuba are expected to be out of the country by the end of the week.

"We would need full assurances from the Cuban government that these attacks will not continue before we can even talk and plan" for resuming operations in Havana, he said.

Most importantly, Tillerson wants "to focus on the safety and well being of our personnel. Once having made that decision we then moved on to consider ensuring that there would be an equitable impact in our two embassies ability to operate."

Routine U.S. visa operations in Havana were suspended indefinitely in response to the attacks.

U.S. officials had previously told reporters they believed some kind of inaudible sound weapon was used on the U.S. staff either inside or outside their residences in Havana.

Canadians in Cuba have also been hurst, with a source close to that country's embassy telling AFP that more than five families were affected, including several children.

Observers doubt that Cuba would have risked antagonizing its neighbors at the end of 2016 -- when relations between the former Cold War enemies were thawing, before they deteriorated under Trump.

The head of North American affairs at Cuba's foreign ministry, Josefina Vidal, earlier told state television that Cuba wants to work with the United States to resolve this case.