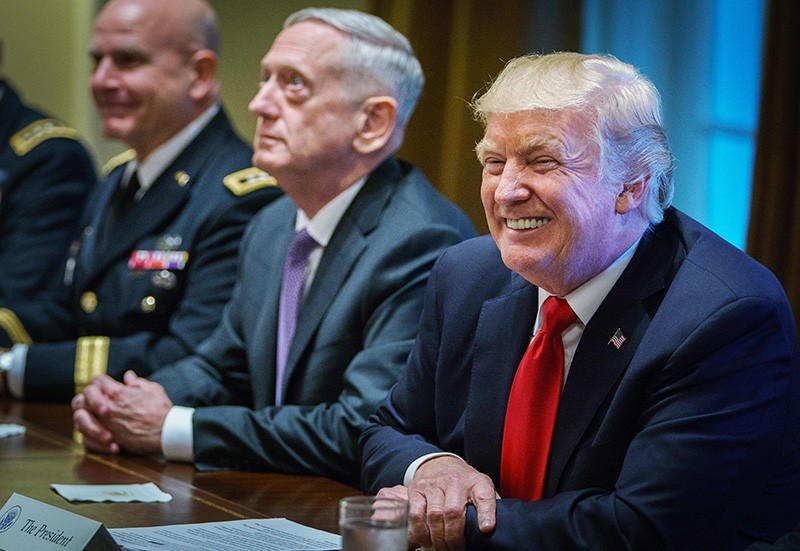 U.S. President Donald Trump smiles as Defense Secretary James Mattis (C) looks on during a meeting with senior military leaders in the Cabinet Room of the White House on October 5, 2017. (AFP Photo)
by Oct 06, 2017 12:00 am

U.S. President Donald Trump on Friday fueled speculation about his cryptic warning that this is the "calm before the storm," further refusing to explain the comment.

After huddling with military leaders to discuss Iran, North Korea and the Daesh terror group on Thursday evening, Trump used a photo with military brass and their partners to make an ominous pronouncement.

On Friday, he kept up the suspense, telling journalists wondering what he was talking about: "You'll find out."

Trump's original remarks -- against a surreal backdrop of soft classical music -- sent diplomats across Washington rushing to find out if military action was afoot.

"You guys know what this represents?" Trump asked reporters in the State Dining Room.

Reporters asked what he meant and Trump said: "It could be, the calm, the calm before the storm."

The reporters pressed again, asking whether he was referring to Iran or Daesh.

Trump replied: "We have the world's great military people in this room, I will tell you that. And uh, we're gonna have a great evening, thank you all for coming."

Once again, Trump was asked what he meant. He said: "You'll find out."

Press Secretary Sarah Huckabee Sanders framed the comments as part of Trump's philosophy of not talking about specifics.

The administration is "never going to say in advance what the president is going to do."

Asked if Trump's comments should be taken seriously, she replied: "I think you can take the president protecting the American people seriously, he's been very clear it's the number one priority and if he feels action is necessary, he'll take it."

She rejected allegations from Republican Senator Bob Corker that generals around Trump were saving America from chaos.

"I think that the president is the one that's keeping the world from chaos," she claimed.