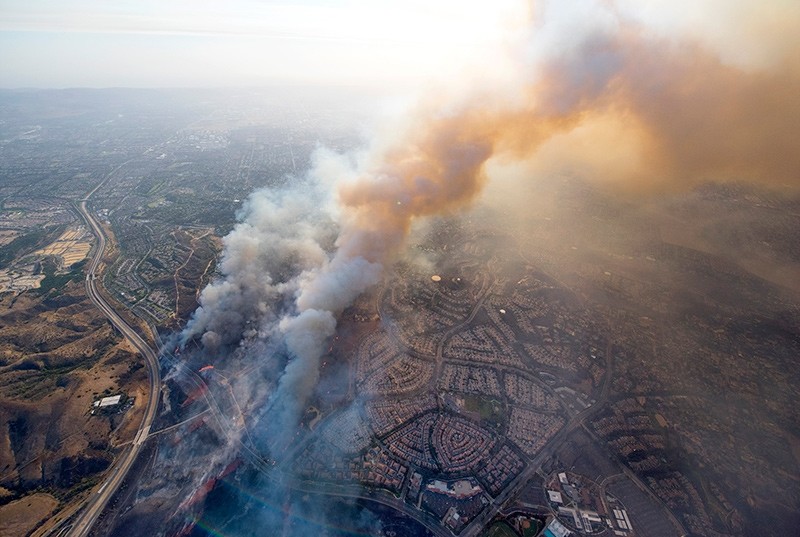 The fires broke out nearly simultaneously and then exploded overnight, sending residents fleeing as embers rained down and flames raged around them. Two hospitals in Santa Rosa, the largest city in the region with 175,000 people, were forced to evacuate patients.

Taken as a group, the fires are already among the 10 deadliest in California history, and the death toll is expected to grow.

The state's fire chief called the damage estimates for the fire in the wine country conservative and said the fires were burning throughout an eight-county swath of Northern California, including Napa, Sonoma and Yuba counties.

Mandatory evacuations were ordered after the blazes broke out late Sunday. Long lines formed at gas stations when many families heeded a middle-of-the-night call to get out. A spokesperson for Pacific Gas & Electric said 114,000 customers were without power.

"It was an inferno like you've never seen before," said Marian Williams, who caravanned with neighbors before dawn as one of the wildfires reached the vineyards and ridges at her small Sonoma County town of Kenwood.

Williams could feel the heat of her fire through the car as she fled. "Trees were on fire like torches," she said.

With downed trees or flames blocking routes, Sonoma County residents struggled to figure out what roads to take.

Fires also burned just to the east in the Napa County as well as in Yuba, Butte and Nevada counties — all north of the state capital. Many of the fires spread suddenly overnight, whipped by furious winds.

Santa Rosa, the largest city in the fire area with a population of about 175,000, was hit hard. The city lost a Kmart and unknown numbers of other businesses and homes, as the blaze shut down its schools and forced patients at two city hospitals to evacuate. A Hilton Hotel was smoldering and in ruins.

"Imagine a wind-whipped fire burning at explosive rates. This is 50 miles per hour. Literally it's burning into the city of Santa Rosa ... burning box stores," Pimlott said. "This is traditionally California's worst time for fires, California's most damaging times for fires have occurred in October."

More than 200 people were hurriedly evacuated from Sutter Santa Rosa Regional Hospital and Santa Rosa Medical Center, where the blaze could be seen raging nearby.

Napa County Fire Chief Barry Biermann said the fires had burned more than 68 square miles (176 sq. kilometers). Crews had not yet been able to contain a fire heading toward downtown Napa.

"Right now, with these conditions, we can't get ahead of this fire and do anything about the forward progress," Biermann said.

John Dean was driving to his Sonoma County home early Monday when he saw a house on fire along the road. Soon he saw more houses engulfed in flames.

"I mean blazing, falling down on fire," he said.

Dean sped to his home in Kenwood, alerted neighbors and fled to the town of Sonoma. He was one of hundreds of evacuees who streamed into a 24-hour Safeway market overnight, while authorities set up an official evacuation center.

Maureen McGowan was house-sitting for her brother near Kenwood, and said both of the homes on his property were on fire when she left. At the Safeway, she pointed to her feet, still in slippers. She had fled so fast that she hadn't put on her shoes.

Belia Ramos, chairwoman of the Napa County Board of Supervisors, said "tremendous" wind gusts were making the fire unpredictable. "It's something that we're having to be very cautious about."

"We're focusing on making evacuations and trying to keep people safe. We are not prepared to start counting," she said shortly after sunrise.

Ann Dubay, a spokeswoman for the Sonoma County Emergency Operations Center, said the area where the largest fire started was relatively rural but the flames "went through many, many neighborhoods," and authorities did not know how many structures were gone.

Emergency lines were inundated with callers reporting smoke, prompting officials to ask that the public "only use 911 if they see actual unattended flames, or are having another emergency."

Business owner Andy Lahiji stood before a burned-out warehouse where he said he had lost his inventory of furniture and other property. He said it took firetrucks ages to arrive Monday morning.

"They said, 'We have so many other places to go, you have to wait.' And then when they came, they had only a couple of guys," he told the station. "I feel very sad. I'm glad nobody got hurt. Hopefully insurance takes care of it."

The National Weather Service said widespread wind gusts between 35 mph and 50 mph were observed in the north San Francisco Bay region and isolated spots hit 70 mph. The winds were expected to subside at midday.

Community centers, the Sonoma County Fairgrounds and other local centers were opened for evacuees.