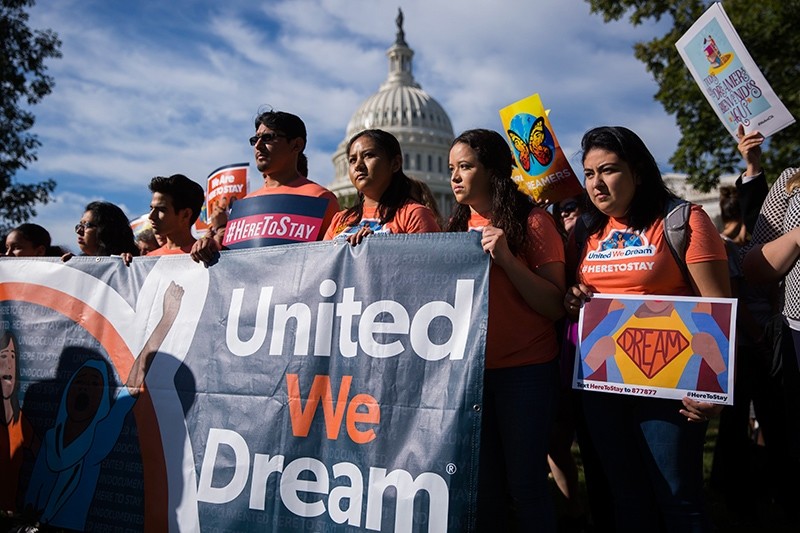 Protesters chant slogans during a news conference with DACA recipients and pro-immigrant advocacy groups to demand passage of a 'Clean Dream Act', at the U.S. Capitol in Washington, D.C., U.S., Oct. 5, 2017. (EPA Photo)
by Compiled from Wire Services Oct 09, 2017 12:00 am

The administration tied these priorities to Democrats' desire to provide legal protection to some 800,000 immigrants known as "Dreamers" who came to the country illegally as children and were covered by an amnesty brought by former President Barack Obama that Trump scrapped last month.

But Trump administration officials said the president will insist on their passage in exchange for supporting legislation that would extend the Deferred Action for Childhood Arrivals, or DACA, program.

"These priorities are essential to mitigate the legal and economic consequences of any grants or status to DACA recipients," White House legislative affairs director Marc Short told reporters. "We're asking that these reforms be included in any legislation concerning the status of DACA recipients."

Initiated under President Barack Obama, DACA protected hundreds of thousands of young people from deportation and allowed them to continue working legally in the U.S. Trump announced a phase-out of the program last month, but he has given Congress six months to come up with a legislative fix.

Included on the list of demands: limiting family-based green cards to spouses and the minor children of U.S. citizens and lawful permanent residents and creating a point-based system.

The White House also said it wants to boost fees at border crossings, make it easier to deport gang members and unaccompanied children, and overhaul the asylum system. And it wants new measures to crack down on "sanctuary cities," which don't share information with federal immigration authorities, among other proposals.

Democrats vehemently oppose many of the demands laid out in the administration list.

"The Administration can't be serious about compromise or helping the Dreamers if they begin with a list that is anathema to the Dreamers, to the immigrant community and to the vast majority of Americans," they wrote.

"If the President was serious about protecting the Dreamers, his staff has not made a good faith effort to do so," they said.

"Congress should reject this warped, anti-immigrant policy wish list," he said, adding: "Immigrants are humans; we should craft policies that treat them as such."