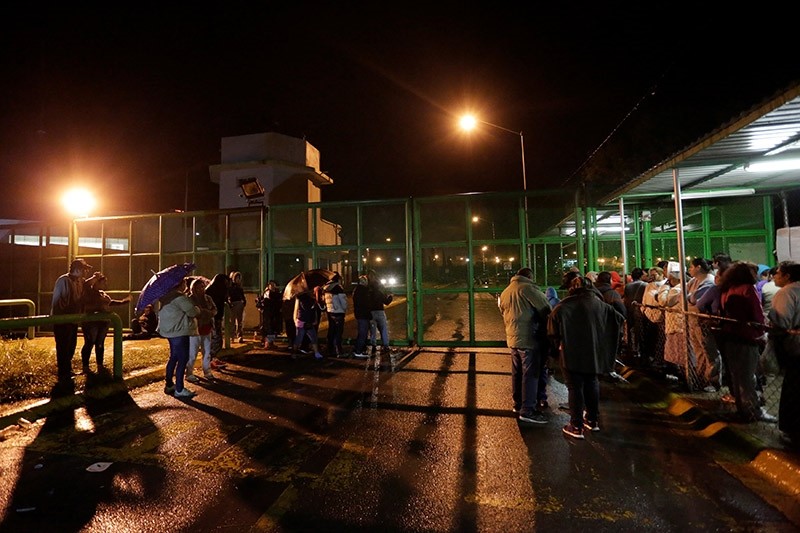 Relatives of inmates wait for news of their loved ones outside the Cadereyta state prison after a riot broke out at the prison, in Cadereyta Jimenez, on the outskirts of Monterrey, Mexico October 10, 2017. (Reuters Photo)
by Compiled from Wire Services Oct 11, 2017 12:00 am

Spokesman Aldo Fasci said the riot occurred at the state prison in Cadereyta and the death toll could climb because eight people were in critical condition.

Unrest at the prison in Cadereyta in northeastern Nuevo Leon state broke out in the morning and was put down. But it flared again later as inmates started fires that sent up huge columns of black smoke visible from far away.

One prisoner died in that fire. Prisoners then took three guards hostage, and when talks with them went nowhere, security forces were sent in, Fasci told reporters.

Police stormed the prison and inmates threw stones and struck them with iron bars, Fasci added.

Use of non-lethal force proved insufficient as some 250 inmates battled the security forces.

In the evening, "lethal force was used to prevent the killing of the three guards and so far the toll is 13 dead," said Fasci. Another 26 people were injured.

Cadereyta is on the outskirts of Monterrey, the third largest city in Mexico.

In 2016, a vicious fight between rival gangs left 49 dead in the Topo Chico jail, also in Nuevo Leon.