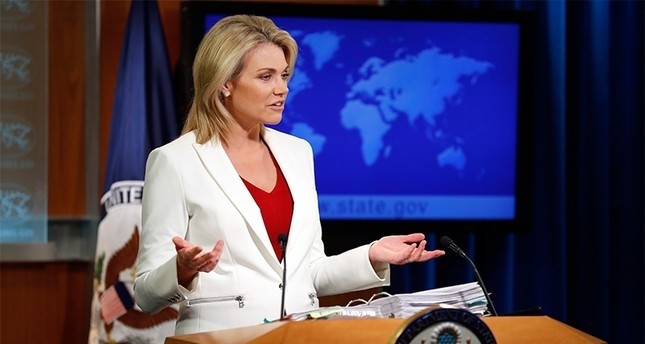 The United States is expecting a thaw in recent tensions with Turkey, a spokesperson for the State Department said late Thursday.

Nauert went on to say that the United States expects Turkey to "fulfill promise of enabling access to lawyers" for Metin Topuz, a communications employee for the US' Istanbul Consulate-General, who has recently been arrested for FETÖ links.

Meanwhile, Deputy Prime Minister Bekir Bozdağ said in an interview with broadcaster Habertürk earlier on the same day that Topuz has not demanded access to a lawyer or to see his family.

Turkish national Topuz, confirmed by the U.S. Consulate in Istanbul as a local employee, was remanded to custody over terrorism charges by an Istanbul court last week. Topuz is suspected of having links to FETÖ, which is behind last year's defeated coup attempt, according to a judicial source. Ankara says FETÖ and its U.S.-based leader, Fetullah Gülen, orchestrated the attempted coup, which killed 250 people and injured nearly 2,200.

"The suspect had phone contact with 121 people investigated for links to FETÖ and contacted people using ByLock hundreds of times," one section of the indictment against Topuz, reported by Anadolu Agency (AA), claims, referring to the encrypted messaging app used by the terrorist group. "The suspect acted as a liaison between members of FETÖ and its leader, Fetullah Gülen, who lives in Pennsylvania," the indictment says, claiming there is strong evidence requiring his arrest.