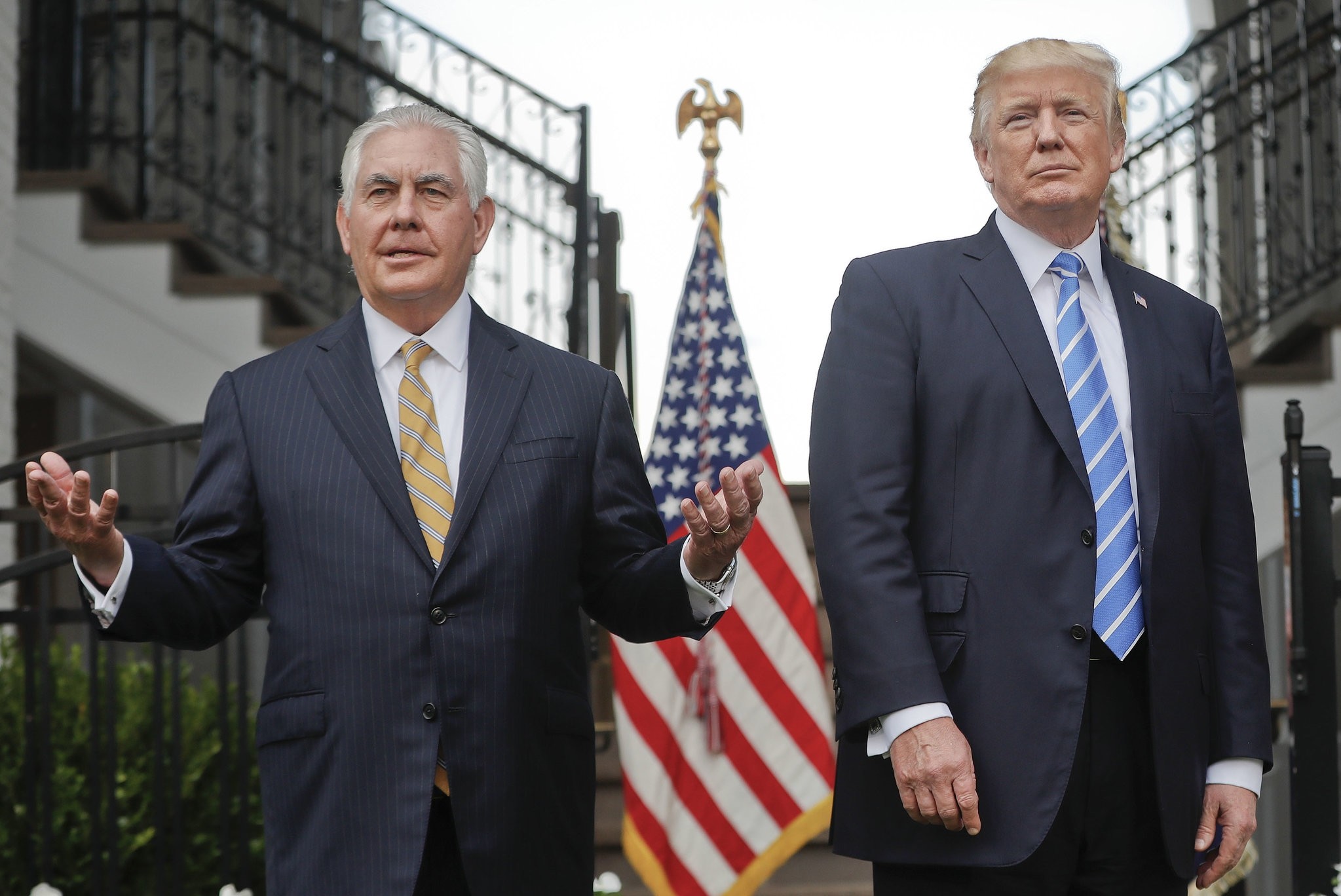 Trump will not withdraw from the Iran nuclear deal, but will say pact is not in U.S. national security interests, Secretary of State Rex Tillerson has said.

"The intent is that we will stay in the JCPOA, but the president is going to decertify," said Rex Tillerson on Friday, referring to the 2015 multilateral agreement, whose fate he indicated will now lie with Congress.

"We're saying, fine, they're meeting the technical compliance," he said indicating that the broader agreement would remain intact for now.

Trump is scheduled to give a speech Friday afternoon on the nuclear accord, which he has repeatedly denounced as the worst deal in American history. The plan would allow Trump to keep up his criticism of the deal, while also reassuring U.S. allies that Washington will not walk away from it — at least not immediately.

Tillerson said Friday that Trump would urge Congress to toughen requirements for Iran to continue to get relief from U.S. sanctions. The administration wants Congress also to amend legislation to highlight troubling non-nuclear Iranian behavior not covered by the deal.

Trump's speech will put the onus on Congress to decide within 60 days whether to snap the sanctions back into place, modify the law or do nothing, according to Tillerson.

Re-imposing sanctions would effectively kill the accord.

Under the current law, Trump faces a Sunday deadline to notify Congress whether Iran is complying with the accord that was negotiated over 18 months by the Obama administration and determine if it remains a national security priority.

Trump will urge lawmakers to codify tough new requirements for Tehran to continue to benefit from the sanctions relief that it won in exchange for curbing its atomic program, according to Tillerson. And he'll announce his long-anticipated intent to impose sanctions on Iran's Revolutionary Guard Corps by designating it a terrorist organization under an existing executive order.

"The reckless behavior of the Iranian regime, and the IRGC in particular, poses one of the most dangerous threats to the interests of the United States and to regional stability," the White House said in a statement released ahead of the speech. The statement, which did not reveal Trump's decision, denounced the Obama administration for its "myopic focus on Iran's nuclear program to the exclusion of the regime's many other malign activities" and said the same "mistakes" would not be repeated.

"The Trump administration's Iran policy will address the totality of these threats from and malign activities by the Government of Iran and will seek to bring about a change in the Iranian's regime's behavior," it said.

Ali Larijani, Iran's parliament speaker, said Friday that any U.S. move against a nuclear deal with Iran would be an "insult" to the United Nations because the U.N. had given the deal its blessing.

He added that any revision of the deal would allow Iran to take its own actions, and warned that the U.S. move could destabilize the international situation.

"We will continue to adhere to our obligations ... for as long as other parties observe the agreement," he said on a visit to Russia.

In his speech, Trump will ask Congress to amend or replace legislation that currently requires him to certify Iranian compliance every 90 days. Officials have said that Trump hates the requirement more than the nuclear deal itself because it forces him to take a position every three months on what he has repeatedly denounced as the worst deal in American history. That frequency has also irritated aides who have complained that they are spending inordinate amounts of time on certification at the expense of other issues.

White House aides had initially sought a venue for Trump's address that would project American power and determination. The shuttered former Iranian embassy in Washington was briefly considered before being deemed inappropriate. Officials also considered the Iwo Jima Marine Corps Memorial, which was ruled out because it is currently being renovated. The Diplomatic Reception Room at the White House was eventually agreed.

American allies, who have pressed the White House to remain in the nuclear accord, will be closely watching the president's address. Trump wants to impress on the European parties to the accord — Germany, France and Britain — the importance of fixing what he sees as flaws in the nuclear accord and addressing malign behavior not covered in the agreement.

The Europeans, along with the other parties, Iran, Russia and China, have ruled out reopening the deal. But some, notably France, have signaled a willingness to tackle unresolved issues in supplementary negotiations. Among those issues are the expiration of several restrictions on advanced nuclear activity under so-called "sunset clauses" that will allow Iran to begin ramping up its enrichment capabilities after 10 years, the end of an arms embargo and the eventual easing of demands for a halt to its missile program.

In the speech, Trump hopes to "recruit" the Europeans into joining his broad strategy, particularly by punishing the Revolutionary Guard, which he and his national security team believe is fomenting instability, violence and extremism throughout the Middle East and beyond, according to one official.

In anticipation of Trump's announcements, Republican legislators have drawn up a new version of the law replacing the current 90-day timetable with "semi-annual" certifications, according to drafts seen by the Associated Press this week.

Senate Foreign Relations Committee chairman Bob Corker said in a statement on Friday that his panel had agreed to fresh certification criteria to include items that are also the province of the U.N. nuclear watchdog and require the U.S. intelligence community to determine if Iran is carrying out illicit activity in facilities to which the International Atomic Energy Agency has not had access.

The certification would also demand that the intelligence community produce judgments on Iranian behavior not covered by the nuclear deal, including missile testing and development, backing for Hezbollah and Assad and threats to Israel and the Mideast more broadly, according to the drafts.