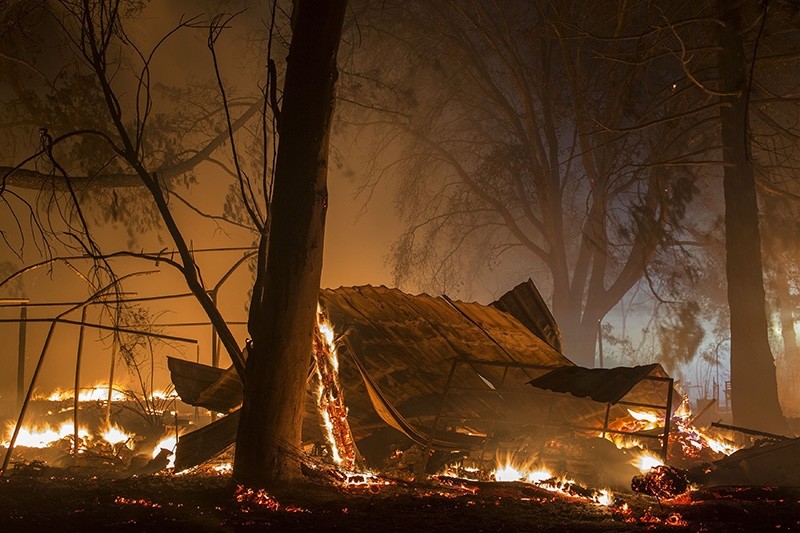 Rising winds fanned the California wildfires again Saturday, forcing hundreds more people to flee from their homes in the state's fabled wine country and testing the efforts of crews who have spent days trying to corral the flames behind firebreaks.

Just a day after firefighters reported making significant progress, the winds kicked up several hours before dawn and pushed flames into the hills on the edge of Sonoma, a town of 11,000. About 400 homes were evacuated as the fires threated Sonoma and a portion of Santa Rosa that included a retirement community that evacuated earlier this week, authorities said.

Dean Vincent Bordigioni, winemaker and proprietor at the Annadel Estate Winery awoke at 3 a.m. with flames erupting on the ridge above his property. "Things went to hell last night," he said. "They've got a good fight going on."

Nearly a week after the blazes began, the fire zone had swollen to an area as long as 100 miles on a side. The flames have left at least 35 people dead and destroyed at least 5,700 homes and businesses, making them the deadliest and most destructive group of wildfires California has ever seen.

On Saturday, an unknown number of additional structures burned down in a rural area, said Daniel Berlant, a spokesman for the California Department of Forestry and Fire Protection.

Judy Guttridge, who was evacuating for the second time this week, said her daughter saw flames advancing over the side of a hill around the same time Bordigioni did and told the family to get out.

"I have good insurance, everything," she said. "All the kids, grandkids, great-grandkids are fine. I'm OK with that."

Firefighters spent much of the last week digging defense lines to keep the flames from spreading. On Friday, they tried to fortify the edge of Sonoma using bulldozers and other heavy equipment.

But if winds push the flames over that barrier, neighborhoods including some of the town's costliest homes were in the path, along with a historic central plaza built centuries ago when the area was under Spanish rule.

The renewed strength of the winds was "testing the work that we accomplished," Berlant said. The greatest risk was that winds would blow embers across the firebreaks and ignite new blazes.

Winds gusting up to 40 mph were expected to continue throughout the day and into the evening.

Also Friday, a lucky few of the nearly 100,000 people who have fled from their homes got to return, and examples of charity were everywhere, along with a sign that began popping up in more and more places: "The love in the air is thicker than the smoke."

Astonishing video released from the fire's hellish first night showed the courage of the deputies and firefighters working amid the flames.

"Go! Go! Go! Go! Go!" an unidentified Sonoma County deputy can be heard yelling in the body-camera video released by the Sonoma County Sheriff's Office. The footage was recorded as he urged hesitant drivers to speed out of a town that was being devoured by flames.

The deputy is shown lifting a disabled woman out of her wheelchair and into an SUV to rush her out of town. And he drives through walls of flame looking for more people to help.

At an RV evacuation site at Sonoma Raceway, evacuees counted their blessings, trying not to think about what they had lost and what they might yet lose.

The mood at sunset Friday was upbeat, even cheerful, as children and dogs played in the twilight. More than 100 campers were parked by the side of a highway. There were portable bathrooms and tables groaning from donated water bottles, stuffed animals and food.

Ron Vitt, 75, and Ellen Brantley, 65, sat in chairs watching the cars go by, a small table between them holding drinks: gin with cocktail onions for him and gin with lime for her. They joked as their dog bounced about happily.

"There is a sun that's going to set. There's a dog who is really happy," Vitt said. "So you got to bring some sanity into this whole thing."

At Sonoma Valley High School, the parking lot was packed with cars and vans. Middle school Principal Will Deeths supervised volunteers and made sure people had plenty of water and a filter mask. He said more than 100 people spent Thursday night at the school, which has been converted into a shelter.

He said the community response has been phenomenal. Hairdressers from Oakland came to fix people's hair and a young man played guitar to entertain families, he said. They even had a birthday party for a 5-year-old boy, complete with a donated cake from a local bakery.

"Two days ago we were in need of size 5 diapers," he said. "Someone put it on Facebook and within an hour, four or five cars pulled up, two or three boxes. Boom, boom, boom, here you go."

More than a dozen fires broke out nearly simultaneously on Oct. 8 and people had little time to escape. Most of the deaths were elderly people.

In all, 17 large fires still burned across the northern part of the state, with more than 9,000 firefighters attacking the flames using air tankers, helicopters and more than 1,000 fire engines.