Ambassador Haley urges UN to embrace US stance on Iran 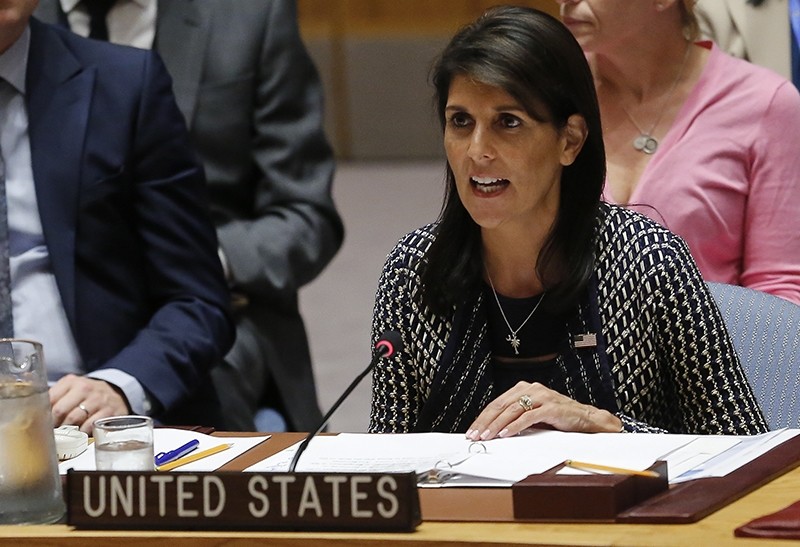 U.S. Ambassador Nikki Haley urged the U.N. Security Council on Wednesday to follow in the U.S. footsteps and confront Iran over what she described as its "aggressive, destabilizing and unlawful behavior" in the region.

The council met for its monthly debate on the Middle East just days after U.S. President Donald Trump refused to certify the Iranian nuclear deal, leaving its fate to the U.S. Congress.

"The United States has embarked on a course that attempts to address all aspects of Iran's destructive conduct -- not just one aspect," Haley told the council.

"It's critical that the international community do the same."

Trump's decision has been sharply criticized by Washington's partners in the deal -- France, Britain, China, Russia -- which sit on the Security Council as permanent members along with the United States. Germany is also a signatory.

The 2015 nuclear deal was unanimously endorsed in a Security Council resolution, placing the onus on the top U.N. body to uphold its implementation.

Haley accused Iran of "playing" the council by complying with technical provisions of the nuclear deal while threatening peace and security in the Middle East with its "outlaw behavior."

She pointed to arms sales and military support for warring sides in Yemen, Syria and Lebanon as examples of Iranian violations of U.N. resolutions and singled out Iran's missile launches as "the regime's most threatening act."

"Iran must be judged in totality of its aggressive, destabilizing and unlawful behavior. To do otherwise would be foolish," she said.

The new more aggressive U.S. policy toward Iran provides an "opportunity" for the council to show that it will defend council resolutions, she argued.

"This council now has the opportunity to change its policy toward the Iranian regime," she asserted.

Russian Ambassador Vassily Nebenzia tersely reminded Haley that the Middle East debate is aimed at tackling the Israeli-Palestinian conflict and that she "didn't even mention the word Palestine."

Turning to Iran, Nebenzia warned that "attempts to dismantle the architecture of the agreement on the Iranian nuclear program will lead to a negative reaction in the Middle East and beyond."