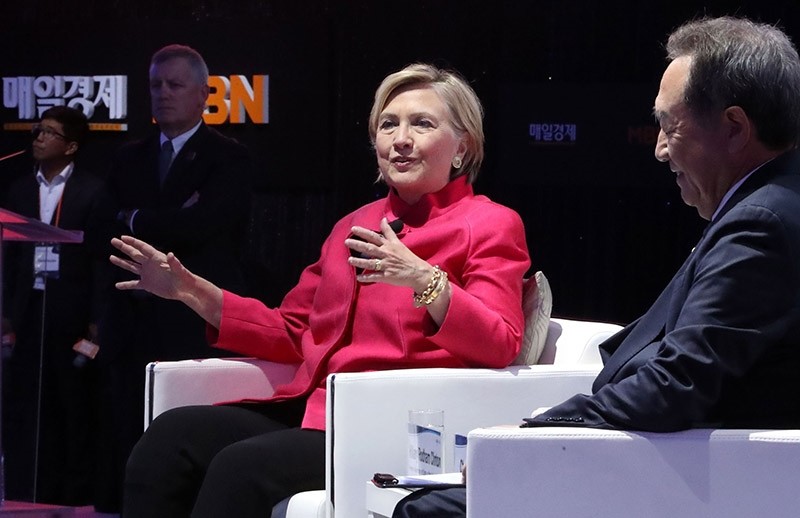 Clinton lost last year's presidential election to the insurgent Republican despite having decades of experience in politics.

Tension has been running high for months as the White House's new incumbent and the North's Kim Jong-Un trade threats of war, with Trump dubbing Kim "Rocket Man" and being called a "dotard" in response.

In recent months Pyongyang has carried out multiple launches of missiles potentially capable of reaching the U.S. mainland, and its sixth nuclear test.

But Trump's tit-for-tat with the young, autocratic ruler of the isolated regime only dents Washington's credibility and helps Kim bask in global attention he seeks, the former secretary of state told a forum in Seoul.

"I am worried about some of the recent actions from the new administration that seem to raise tensions. Our allies are now expressing concerns about America's credibility and reliability," she said.

Trump's escalating verbal threats have sparked concerns of potential conflict on the peninsula, especially after he warned this month that "only one thing will work" on the North, without elaborating further.

Such "cavalierly threats to start a war are dangerous and short-sighted", Clinton said, adding the regime would be "thrilled" to get the "personal attention of the leader of our country".

Without once mentioning Trump by name, she also said she was "very concerned that the new administration is draining the government of the expertise" in diplomacy over the North.

"There are few Asia experts of senior level left at the State Department," she said.

Talks between the adversaries have long been urged by China in particular, but Washington and its ally Japan have been reluctant to sit down at the table while Pyongyang continues to pursue a goal of developing a nuclear-tipped missile capable of hitting the United States.

North Korea's Deputy U.N. Ambassador Kim In Ryong told a U.N. General Assembly committee on Monday that the situation on the Korean peninsula was now touch-and-go point "and a nuclear war may break out any moment".

Regarding China's role in reining in North Korea, Clinton said Beijing would be better off trying to "tighten and absolutely enforce sanctions" against North Korea.

North Korea's relationship with its main ally and trading partner China have been strained by the rapid pursuit of its weapons programs, with many of Pyongyang's recent tests coinciding with major Chinese events.

There had been fears that North Korea would conduct another test to coincide with the start of China's five-yearly party congress on Wednesday. Instead, Pyongyang sent Beijing a congratulatory message.

The central committee of the North's ruling Workers' Party of Korea said China had made "great progress in accomplishing the cause of building socialism with Chinese characteristics" under the guidance of the Communist Party of China.

"We are greatly pleased over this," the party central committee said in the message carried by the official KCNA news agency, adding that it "sincerely wished" the China congress "satisfactory success."

Can't have it both ways

China has been curbing South Korean businesses there since Seoul decided to deploy the Terminal High Altitude Area Defence (THAAD) system, saying its powerful radar could be used to pierce its territory. South Korea and the United States have repeatedly told China that THAAD aims only to defend against North Korea's missile threats.

"The Chinese can't have it both ways. They can't do less than they could to tighten economic pressures on North Korea and same time discount the real threat South Korea and its citizens face," she said.

The 69-year-old former first lady, who served as the US' top diplomat from 2009 to 2013 under president Barack Obama, suffered a shock defeat to Trump in the 2016 election.

She felt "so responsible" for the defeat, she said, but also blamed multiple factors including sexism, misogyny and Russian intervention she recounted in her recent memoir "What Happened".

Moscow, she said, was "trying to destabilize every democracy".

Trump's presidency has been overshadowed by allegations that his campaign team colluded with Russia during last year's election.