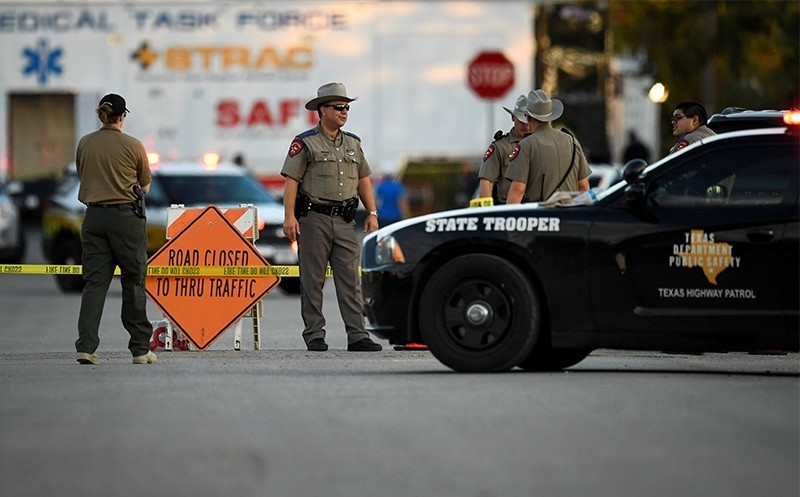 Law enforcement officials set up along a street near the First Baptist Church after a mass shooting in Sutherland Springs, Texas, US., November 5, 2017 (Reuters Photo)
by Agencies
Nov 05, 2017 12:00 am

A man dressed in black tactical-style gear and armed with an assault rifle opened fire inside a church in a small South Texas community on Sunday, killing 26 people and wounding about 20 in what the governor called the deadliest mass shooting in the state's history. The dead ranged in age from 5 to 72 years old.

Authorities said the man, identified as Devin Kelley, walked into the First Baptist Church in Sutherland Springs and began shooting, killing multiple people and wounding others. Wilson County Sheriff Joe Tackitt told the Wilson County News that the shooter had been "taken down," but it's not known how the shooter died.

Authorities haven't said how many were killed or wounded, but a Wilson County commissioner, Albert Gamez, told cable news outlets that emergency officials told him more than 20 people were slain and more than 20 others were wounded, though those figures hadn't been confirmed.

Video on KSAT television showed first responders taking a stretch from the church to a waiting AirLife helicopter. Some victims were taken by medical helicopter to the Brooke Army Medical Center, KSAT said.

Megan Posey, a spokeswoman for Connally Memorial Medical Center, which is in Floresville and about 10 miles from the church, said "multiple" victims were being treated for gunshot wounds. She declined to give a specific number but said it was less than a dozen.

A woman who lives about 10 minutes away from Sutherland Springs in Floresville and was monitoring the chaos on a police scanner and in Facebook community groups, said that everyone knows everyone in the sparsely populated county.

"This is horrific for our tiny little tight-knit town," said Alena Berlanga. "Everybody's going to be affected and everybody knows someone who's affected," she said.

President Donald Trump tweeted from Japan, where is his on an Asian trip, that he was monitoring the situation following the shooting. Texas Gov. Greg Abbott called the shooting an "evil act," and promised "more details" from the state's Department of Public Safety soon.