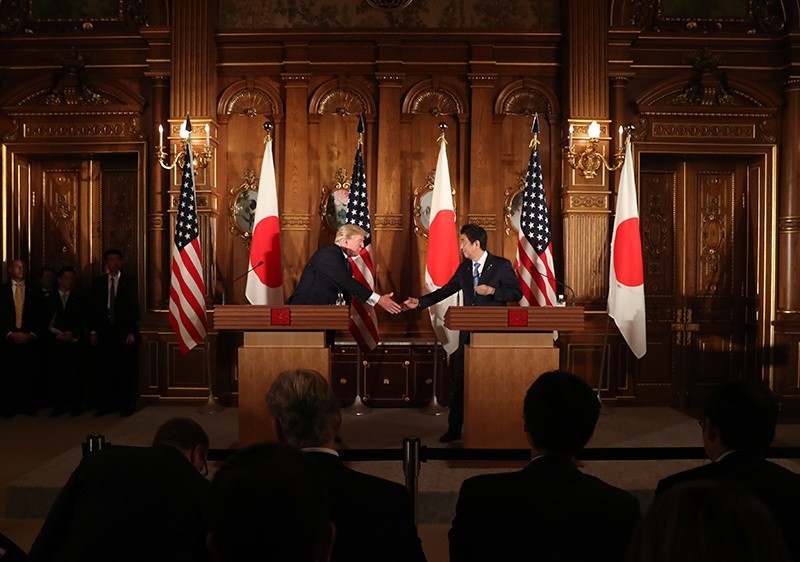 President Donald Trump, left, and Japanese Prime Minister Shinzo Abe, reach out to shake hands each other during a joint news conference at the Akasaka Palace, Monday, Nov. 6, 2017, in Tokyo (AP Photo)
by Compiled from Wire Services Nov 06, 2017 12:00 am

U.S. President Donald Trump vowed on Monday to push for a free and balanced trade partnership with Japan after decades of "massive trade deficits" but said relations with close ally Tokyo were "better than we have ever had."

"The United States has suffered massive trade deficits at the hands of Japan for many, many years," Trump said at the start of a meeting with Japanese and U.S. business leaders on the second day of a 12-day Asian trip that will focus on both trade and North Korea's nuclear and missile programs.

Trump complained Monday that Japan had been "winning" for decades and rebuked the current relationship, saying the trade deals were "not fair and not open." He told a group of American and Japanese business leaders: the United States was open for business, but he wanted to reshape the nations' trade relationship, though he did not say how he would cut the trade deficit with Japan, which totaled nearly $70 billion last year.

He also downplayed the potentially contentious nature of the negotiations, though the Japanese government has not shown much appetite for striking a new bilateral trade agreement. Tokyo had pushed to preserve the Trans- Pacific Partnership, which Trump has abandoned.

"We will have more trade than anybody ever thought under TPP. That I can tell you," Trump said. He said the multinational agreement was not the right deal for the United States and that while "probably some of you in this room disagree ... ultimately I'll be proven to be right."

The president seemed at ease in front of his CEO peers, calling out some by name, teasing that the first lady had to sell her Boeing stock once he took office and calling for Japanese automakers to make more of their cars in America, though major companies like Toyota and Nissan already build many vehicles in the United States. He promised that profits would soon rise on both sides of the Pacific once new agreements were struck.

"We'll have to negotiate that out and it'll be a very friendly negotiation," Trump said, suggesting it would be done "quickly" and "easily."

Japan orchestrated a lavish formal welcome for the Trumps, complete with military honor guard and a traditional feeding of koi in a pond. Trump first tossed handfuls of feed into the pond before quickly dumping the entire box in a move that drew laughter from Secretary of State Rex Tillerson standing nearby. Trump and his wife, Melania, earlier paid a formal state call on Japan's Emperor Akihito and his wife, Empress Michiko, at the Imperial Palace.

In Washington, a new analysis emerged from the Pentagon saying that a ground invasion of North Korea is the only way to locate and destroy, with complete certainty, all components of Kim's nuclear weapons program.

"It is the most bleak assessment," said U.S. Sen. Dianne Feinstein, a member of the Senate Intelligence Committee.

Abe welcomed Trump on Sunday with an effusive display of friendship that now gives way to high-stakes diplomacy. The leaders, who have struck up an unlikely but easy rapport, played nine holes at the Kasumigaseki Country Club and, giving Trump a taste of home, ate hamburgers made with American beef.

"The relationship is really extraordinary. We like each other and our countries like each other," Trump said before dinner with Abe, who for this meal did show Trump traditional cuisine with a teppanyaki dinner. "And I don't think we've ever been closer to Japan than we are right now."

While there is worry in the region about Trump's unpredictable response to the threat posed by Kim, Trump made clear he did not intend to tone down his bellicose rhetoric even while in an Asian capital within reach of North Korea's missiles.

"There's been 25 years of total weakness, so we are taking a very much different approach," he said aboard Air Force One.

Trump pledged to work to return the missing to their families, intensifying the pressure on North Korean leader Kim Jong Un by elevating these heart-wrenching tales of loss to the international stage in hopes of pushing Pyongyang to end its provocative behavior toward American allies in the region.

"We've just heard the very sad stories about family members — daughters, wives, brothers uncles, fathers - it's a very, very sad number of stories that we've heard," Trump said. "They were abducted in all cases by North Korea and we will work with Prime Minister Abe on trying to get them back to their loved ones."

Trump and first lady Melania Trump stood with nearly two dozen relatives, some of whom held photos of the missing. North Korea has acknowledged apprehending 13 Japanese in the 1970s and 1980s, but claims they all died or have been released. But in Japan, where grieving relatives of the abducted have become a symbol of heartbreak on the scale of American POW families, the government insists many more were taken — and that some may still be alive.

Trump has delivered harsh denunciations of Kim, belittling him as "Little Rocket Man" and showing no sign of easing pressure even while in the very Asian capitals threatened by Pyongyang's missiles.

But Trump's message on the second day of his five-country Asian tour was overshadowed by another tragic shooting back home.

Trump called the Texas church shooting that claimed at least 26 lives "an act of evil," denounced the violence in "a place of sacred worship" and pledged the full support of the federal government. He said that in a time of grief "Americans will do what we do best: we pull together and join hands and lock arms and through the tears and sadness we stand strong."

He ignored shouted questions from reporters about gun control.

North Korea has long been the critical issue looming over Trump's trip that will include direct talks with Trump's Chinese and Russian counterparts.

Trump and Abe, who has taken a more hawkish view on Pyongyang than some of his predecessors, voiced the same concern over the North's victims and repeatedly touted their close relationship over two days that included a round of golf, a hamburger with American beef and a couples' dinner at a teppanyaki restaurant.

Disagreements on trade could strain the friendship.