More than 13,000 people killed by gun violence in US this year 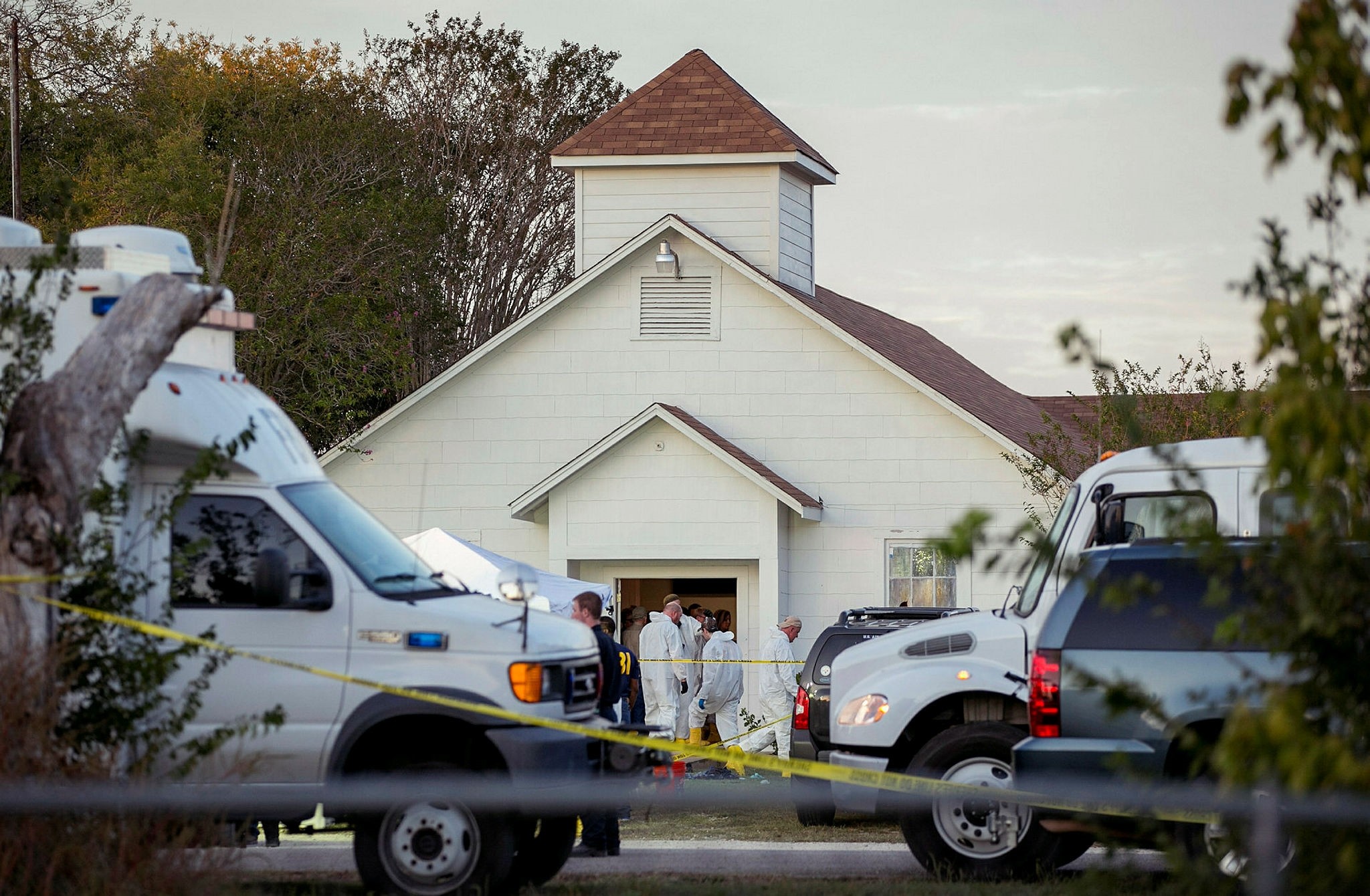 Investigators work at the scene of a deadly shooting at the First Baptist Church in Sutherland Springs, Texas, Nov. 5.
by Daily Sabah with Wires Nov 07, 2017 12:00 am

The church shooting that killed at least 26 in Texas is an example of the alarming gun violence in the U.S. with some 13,000 people killed in firearm assaults so far this year, according to a report

After the most recent shooting in a Texas church, the death toll from mass shootings in the U.S. has totaled more than 13,000 so far this year, revealing the ongoing gun violence in the country. According to data from the Gun Violence Archive, a total of 307 mass shooting incidents have occurred as of Nov. 5, 2016 with 13,149 fatalities so far. A church shooting killing at least 26 in Sutherland Springs, Texas marks the second mass shooting in the last 35 days in the U.S. The shooting comes just over a month after a gunman in Las Vegas fired down from a hotel room at an outdoor concert, killing 58 people and wounding hundreds.

It was the deadliest attack in modern U.S. history and rekindled a years-long national debate over whether easy access to firearms was contributing to the trend of mass shootings.

Sunday's carnage saw a gunman wearing a bulletproof vest use an assault rifle to open fire on the congregation of a small-town Texas church, killing 26 people and wounding 20 more. The church shooting marks the second mass shooting in the last 35 days in the U.S.

The lone gunman, dressed in black tactical gear and a ballistic vest, drove up to the white-steepled First Baptist Church in Sutherland Springs and started firing inside. He kept shooting once he entered, killing or wounding victims ranging in age from 5 to 72 years old.

The gunman, identified as 26-year-old Devin Kelley was described by authorities as a young white male who was found dead in his vehicle after being confronted by a local resident.

The U.S. Air Force said Kelley served at a base in New Mexico starting in 2010 before being court-martialed in 2012 on charges of assaulting his wife and child. He was sentenced to 12 months in confinement and received a "bad conduct" discharge, Ann Stefanek, a spokeswoman for the U.S. Air Force, told reporters. He was discharged in 2014.

The massacre is likely to renew questions about why someone with a history of violence could amass an arsenal of lethal weaponry.

In rural areas like Sutherland Springs, Texas, gun ownership is a part of life and the state's Republican leaders for years have balked at campaigns for gun control, arguing that more firearms among responsible owners make the state safer.

As with many other previous shootings, Democrats pointed to the latest tragedy to highlight the need for stricter gun control, a hot-button issue in a country that holds the right to bear arms as almost sacred.In denouncing the "act of hatred," Donald Trump's predecessor Barack Obama said, "May God also grant all of us the wisdom to ask what concrete steps we can take to reduce the violence and weaponry in our midst."

President Trump said the United States was living in "dark times" as it grieved Monday a shooting massacre at a Texas church, but with calls for stricter gun control reinvigorated, he insisted the latest tragedy "isn't a guns situation."

"I think that mental health is your problem here," Trump told journalists when asked if gun control could reduce the rampant firearms violence plaguing the U.S.

Speaking in Tokyo as part of his Asia tour, the U.S. president dubbed the gunman "deranged."

Sunday's shooting occurred on the eighth anniversary of the Nov. 5, 2009, massacre of 13 people at the Fort Hood Army base in central Texas. A U.S. Army Medical Corps psychiatrist convicted of the killings is awaiting execution.

In 2015, a white gunman killed nine black parishioners at Emanuel African Methodist Episcopal Church in Charleston, South Carolina. The gunman was sentenced to death for the racially motivated attack.

In September, a gunman killed a woman in the parking lot of a Tennessee church and wounded six worshipers inside.