Deported US military veterans protest in Mexico on US Veterans Day 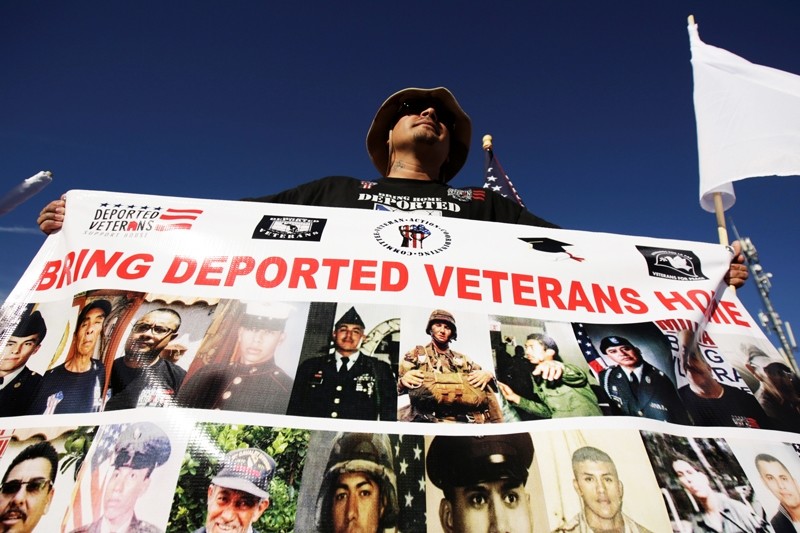 Mexican veteran soldier Ivan Icon, who said he served in the U.S Army in Vietnam and Iraq under the promise of becoming a citizen but ended up as deportee, protests at the border between the U.S. and Mexico during Veterans Day ( Reuters Photo)
by Nov 12, 2017 12:00 am

A group of Mexicans who served with the US military in Vietnam and Iraq only to be deported held a Veterans Day protest on Saturday in the border city Ciudad Juarez.

A stone's throw from the bridge between Juarez and El Paso, Texas, the deportees demonstrated with the flags of their US military units.

"We served a country that has cheated us," said Jose Francisco Lopez Moreno, 64. Many Mexicans have served in the US military in exchange for expedited residency.

But these veterans were deported for committing crimes, despite risking their lives in far-flung combat.

"It is so unfair. They separated us from our families, and we are alone here with no health care or assistance of any kind," said Lopez, who served in Vietnam but was deported to Mexico in 2004. Veterans in the United States receive pensions and health care.

Local officials estimate there are about 300 deportees.

"For as long as I live, even if I die on this side, I will always love the US flag. That was my life," said Ivan Ocon, who served in Iraq in 2003 but last year was deported to his homeland.

"It was like having a house come crashing down on top of you, to have them turn their backs on you after all that," he added.

"You think that you would not be deported because you were part of something so great, but in the end, they throw you out just the same," he said.

"We want to go back. That's what we are asking Donald Trump. We fought for your country," he said.

Trump has brought US-Mexican ties to their lowest point in many decades, seeking to build a border wall he first said he would force Mexico to fund. He later backtracked on that idea.