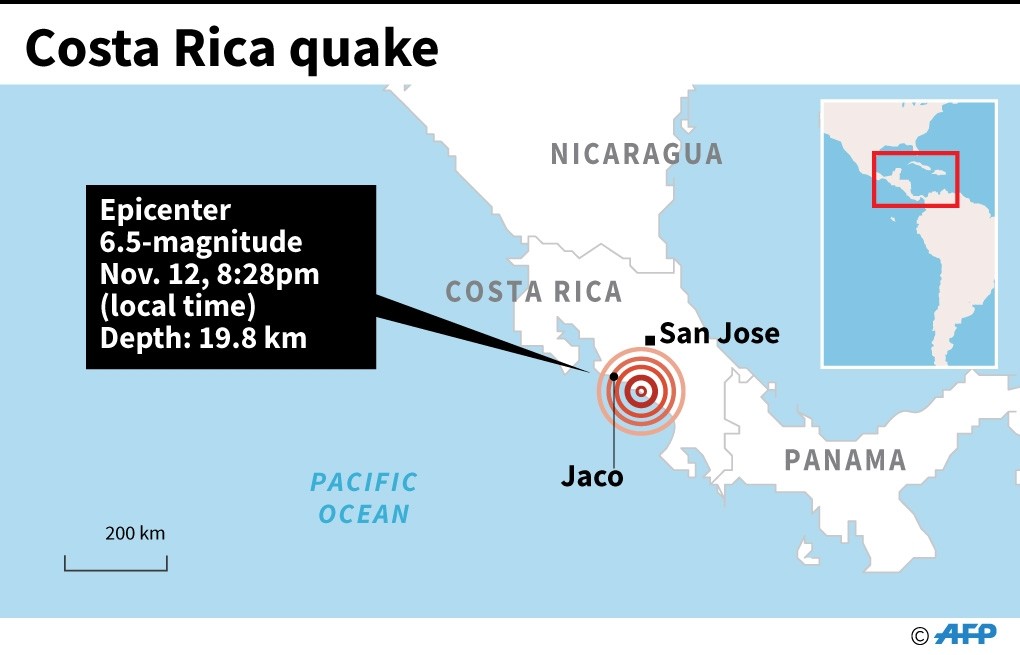 A strong earthquake with a preliminary magnitude of 6.5 shook Costa Rica on Sunday night, knocking items from shelves and sending people rushing outside in panic.

The country's Public Safety Ministry said it had reports of two serious injuries as a result of the quake, but did not provide additional details.

Electricity was knocked out in some areas as power lines and poles fell, but there were no reports of major infrastructure damage from the tremor, which hit in a lightly populated area along the Pacific Coast. The government reported some rockslides obstructing highways near the epicenter.

The U.S. Geological Survey said the earthquake was centered about 10 miles (15 kilometers) southeast of the town of Jaco, which is about 60 (100 kilometers) miles southwest of the capital, San Jose. The quake was at a depth of about 12 miles (20 kilometers).

The National Emergency Commission said there was no chance of a tsunami.

Four minutes after the initial earthquake, a magnitude 5.2 aftershock struck.

President Luis Guillermo Solis said via Twitter that the government was still gathering information. He urged people to remain calm and prepare for aftershocks.

Matt Hogan was at home in Punta Uvita, about a 90-minute drive down the coast from the epicenter when the earthquake hit around 8:30 p.m. He said the shaking whipped up two-foot waves in his swimming pool and knocked over glasses and containers in the kitchen.

Two people died of heart attacks attributed to shock from the seismic disturbance, a spokesman for the public safety ministry told national media.

One network, Channel 6, showed the studio of a sports program that was live at the time, with the camera and the table shaking. It also showed images of alarmed people running in a supermarket as products fell to the ground.

Media in neighboring Panama and Nicaragua said the earthquake was felt on their territories too, but no damage was detected.

Costa Rican officials urged citizens to avoid clogging the emergency lines by not calling 911 unless it was to give information about an urgent situation.