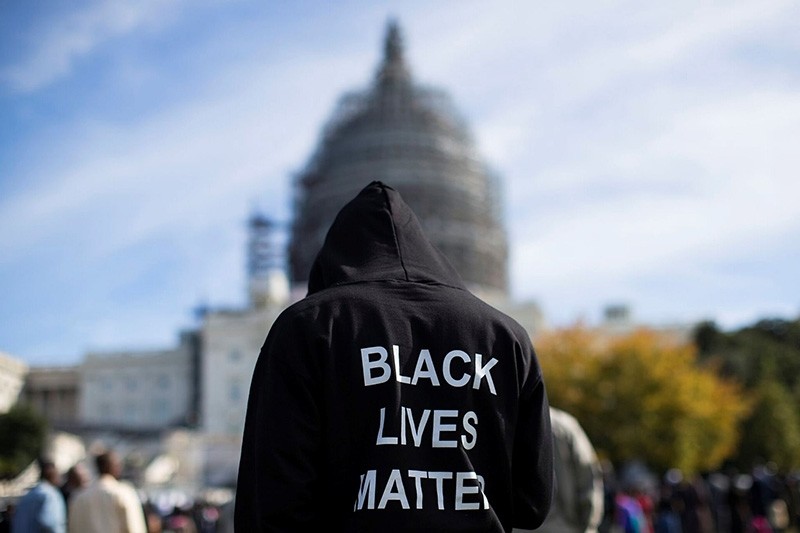 A man wearing a hoodie that reads ,Black Lives Matter, stands on the lawn of the Capitol Building in Washington, D.C. (Sabah File Photo)
by Associated Press Nov 18, 2017 12:00 am

An FBI report on the rise of black "extremists" is stirring fears of a return to practices used during the civil rights movement, when the bureau spied on activist groups without evidence they had broken any laws.

The FBI said it doesn't target specific groups, and the report is one of many its intelligence analysts produce to make law enforcement aware of what they see as emerging trends. A similar bulletin on white supremacists, for example, came out about the same time.

The 12-page report, issued in August, says "black identity extremists" are increasingly targeting law enforcement after police killings of black men, especially since the shooting of Michael Brown roiled Ferguson, Missouri, in 2014. The report describes cases in which "extremists" had "acted in retaliation for perceived past police brutality incidents." It warned that such violence was likely to continue.

Black leaders and activists were outraged after Foreign Policy revealed the existence of the report last month. The Congressional Black Caucus, in a letter to FBI Director Christopher Wray, said the report "conflates black political activists with dangerous domestic terrorist organizations" and would further erode the frayed relationship between police and minority communities.

Before the Trump administration, the report might not have caused such alarm. The FBI noted it issued a similar bulletin warning of retaliatory violence by "black separatist extremists" in March 2016, when the country had a black president, Barack Obama, and black attorney general, Loretta Lynch.

But black voters overwhelmingly opposed Donald Trump. And they are suspicious of his administration, which has been criticized as insensitive on racial issues, including when Trump was slow to condemn white nationalist protesters following a deadly rally in Charlottesville, Virginia.

Attorney General Jeff Sessions, a former Alabama senator whose career has been dogged by questions about race and his commitment to civil rights, did not ease lawmakers' concerns when he was unable to answer questions about the report or its origins during a congressional hearing this past week.

Sessions said he was aware of "groups that do have an extraordinary commitment to their racial identity, and some have transformed themselves even into violent activists." He struggled to answer the same question about white extremists.

It wouldn't be unusual for an attorney general not to have seen such an FBI assessment, which the FBI creates on its own to circulate internally among law enforcement agencies. But the exchange with Rep. Karen Bass, a Los Angeles Democrat, presented an uncomfortable moment.

"What worries me about this terribly is that this is that it is a flashback to the past," Bass said after the hearing. She said she was especially concerned after receiving complaints from members of Black Lives Matter, who said they were being monitored and harassed by police in her district.

The group rallies after racially charged encounters with police, but it is not mentioned in the FBI's intelligence assessment. Even so, Bass said she worried the report will send a message to police that it's OK to crack down on groups critical of law enforcement.

The FBI does not comment on its intelligence bulletins, which usually are not public. In a statement, the FBI said it cannot and will not open an investigation based solely on a person's race or exercise of free speech rights.

"Our focus is not on membership in particular groups but on individuals who commit violence and other criminal acts," the FBI said. "Furthermore, the FBI does not and will not police ideology. When an individual takes violent action based on belief or ideology and breaks the law, the FBI will enforce the rule of law."