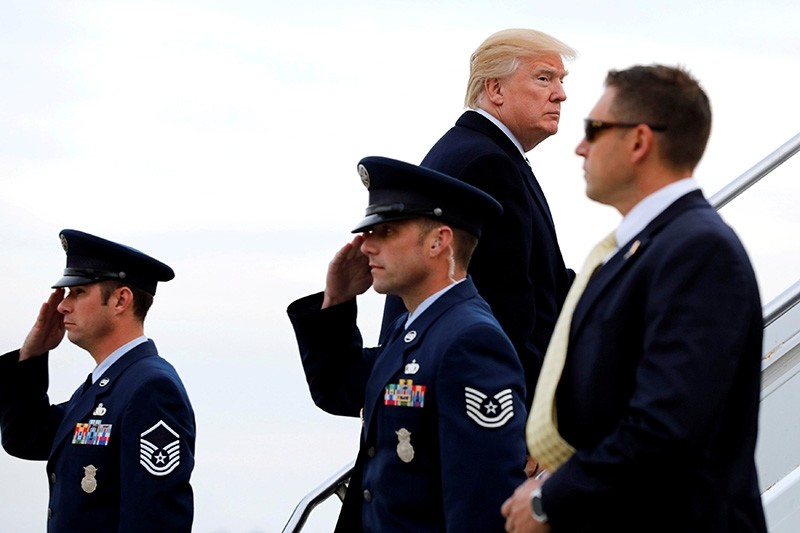 Since President Donald Trump took office in January, the U.S. has abandoned or threatened to quit several international accords under his "America First" policy.

Trump's advisors insist the slogan does not imply any new isolationist stance, but a pattern of disengagement from multilateral commitments has emerged.

On Saturday, the Trump administration announced it was withdrawing the U.S. from a United Nations pact to improve the handling of migrant and refugee situations, deeming it "inconsistent" with its policies.

Here are some of the accords that Trump has abandoned or threatened:

In September 2016, the 193 members of the U.N. General Assembly unanimously adopted a non-binding political declaration, the New York Declaration for Refugees and Migrants, pledging to uphold the rights of refugees, help them resettle and ensure they have access to education and jobs.

The Global Compact, based on the declaration, is due to be presented at the U.N. General Assembly next year.

But the U.S. mission said the declaration "contains numerous provisions that are inconsistent with U.S. immigration and refugee policies and the Trump Administration's immigration principles."

UNESCO: Washington said in October it was pulling out of the U.N.'s Paris-based culture and education body, UNESCO, accusing it of "anti-Israel bias."

The withdrawal is to take effect at the end of next year, when the U.S. will establish an "observer mission" to replace its UNESCO representation.

Paris Climate Deal: Trump announced in June that the U.S. will withdraw from the 196-nation Paris agreement on climate change and seek to negotiate a new global deal.

Declaring he was "elected to represent the citizens of Pittsburgh, not Paris," Trump complained that the accord gives other countries an unfair advantage over US industry and destroys American jobs.

The U.S. pullout will not take effect before November 2020.

TPP: Within days of taking office, Trump withdrew the United States from the Trans-Pacific Partnership (TPP), which was billed as the world's biggest trade pact when signed in February 2016 with 11 other Asia-Pacific nations but not China.

The U.S. pullout killed the deal before it could even be implemented. Trump pledged to negotiate bilateral pacts that would be more favorable to his country.

Iran Nuclear Deal: In October, Trump withdrew his support for the nuclear agreement signed in July 2015 by Iran and the permanent members of the United Nations Security Council: Britain, China, France, Russia and the United States, plus Germany.

The pact's fate is now in the hands of Congress, which may decide to break it by imposing new US sanctions on Iran, and Trump has warned that he may unilaterally quit it at any time.

NAFTA: Trump has ordered a renegotiation of the 1994 North American Free Trade Agreement (NAFTA) with Mexico and Canada, which he has called the worst trade deal ever signed.

Talks began in August but Trump has threatened to pull out of the pact and negotiate bilateral deals if his country did not get a fairer shake by the end of this year.

U.S. Ambassador to the United Nations Nikki Haley has stressed that Washington would continue evaluating its role in U.N. agencies.

NATO: On the campaign trail, Trump called the North Atlantic Treaty Organization "obsolete" before qualifying his remarks and demanding that members of the alliance increase their defense budgets.

Once in office, Trump caused jitters among U.S. partners by waiting almost six months before clearly stating his support for Article Five of the alliance's treaty, which states that an attack on one ally is an attack on all.

Trade with EU: The U.S. president regularly denounces "protectionist" measures by the European Union and the U.S. trade deficit with Germany. Washington targeted Germany and six other nations in March with punitive anti-dumping duties on steel plates.

TTIP: Talks, begun in 2013, for the proposed US-EU Transatlantic Trade and Investment Partnership (TTIP) have been suspended, but U.S. Commerce Secretary Wilbur Ross has made it clear that the U.S. side is only interested in a deal that would reduce U.S. trade deficits.

WTO: The World Trade Organization (WTO) is also in the Trump administration's sights. At a July meeting of the G20 group of major economies, U.S. Treasury Secretary Steven Mnuchin did not exclude renegotiating multilateral accords.

Trump has said a border adjustment tax, which has been advanced by some Republicans to favor exports, could be a job creator. But it could also be at odds with existing rules under the WTO.