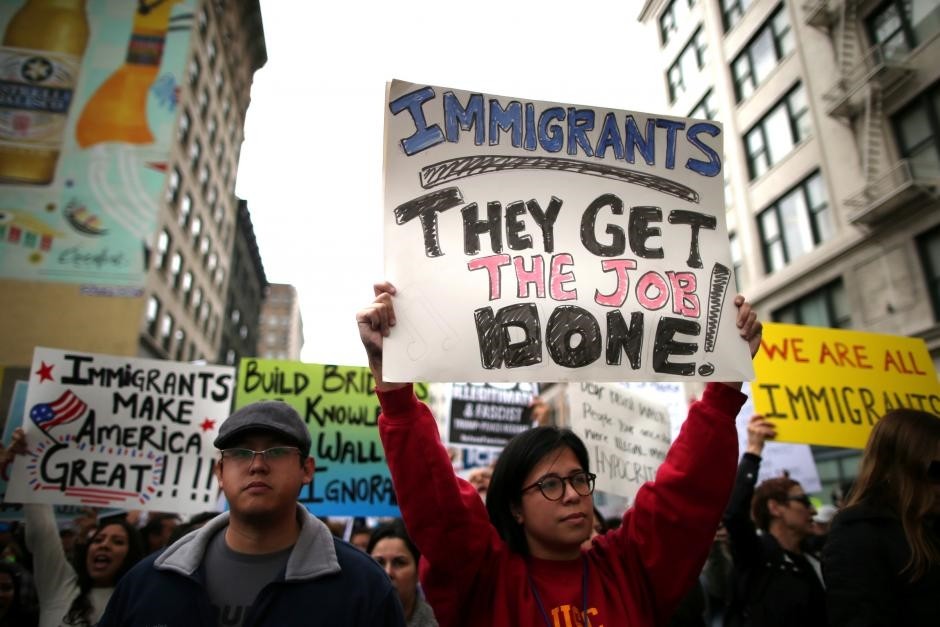 People participate in a protest march calling for human rights and dignity for immigrants, in Los Angeles, February 18, 2017. (Reuters Photo)
by Daily Sabah with Reuters Dec 05, 2017 12:00 am

The U.S. Supreme Court on Monday handed a victory to President Donald Trump by allowing his latest travel ban targeting people from six Muslim-majority countries to go into full effect even as legal challenges continue in lower courts.

The court, with two of the nine justices dissenting, granted his administration's request to lift two injunctions imposed by lower courts that had partially blocked the ban, which is the third version of a contentious policy that Trump first sought to implement a week after taking office in January.

Soon after taking office, Trump signed an order temporarily barring all refugees and visitors from seven predominately Muslim countries. The decision led to chaos at airports and numerous legal challenges and the administration eventually replaced it with a second, somewhat narrower order.

The administration said the restrictions were put in place after a worldwide review of each country's ability to issue reliable passports and share data with the United States.

After the most recent order was issued, the same challengers who sued to stop the earlier bans went back to court. They said the new version still discriminated against Muslims in violation of the U.S. Constitution. The lawsuits did not dispute the restrictions placed on Venezuela and North Korea.

All refugees were temporarily barred as part of Trump's first order but were not addressed in the latest ban. Instead, under a separate directive issued Oct. 24, refugees from 11 countries mostly in the Middle East and Africa now face additional security screening.

The 9th circuit appeals court on Nov. 13 ruled the ban could go partially into effect for everyone without close family relationships to people in the United States. The White House has asked the U.S. Supreme Court to lift those partial restrictions while the cases are moving forward in lower courts so that the ban would apply to everyone.

The government argues the president has broad authority to decide who can come into the United States, but detractors say the expanded ban violates a law forbidding the government from discriminating based on nationality when issuing immigrant visas.

The administration has repeatedly said the ban is not discriminatory and pointed out that many Muslim-majority countries are unaffected by it. Trump has made statements, however, that his legal opponents say reinforce their contention that his actions are based in anti-Muslim sentiments.