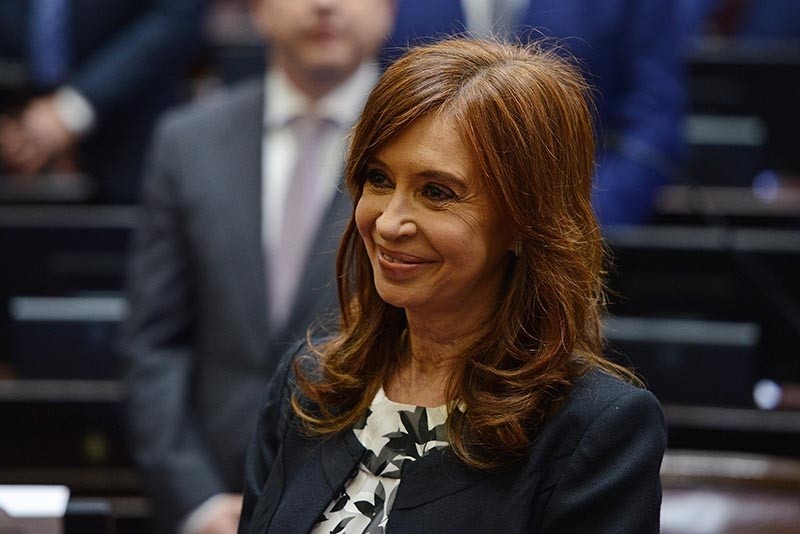 Argentine former president and Buenos Aires senator Cristina Fernandez de Kirchner smiles during the swearing-in ceremony in which she took oath for a new mandate as senator, at the Congress in Buenos Aires, on Nov. 29, 2017. (AFP Photo)
by Dec 07, 2017 12:00 am

An Argentine judge Thursday ordered the arrest of former president Cristina Kirchner for allegedly covering up Iranian involvement in a 1994 bombing at a Buenos Aires Jewish center that left 85 people dead, according to a judicial source.

The order also removes the judicial immunity of Kirchner, who served as president from 2007-2015 and is now a senator.

She has previously called the case an "absurdity."

"As happens regularly in Argentina, the news was first leaked to the press and Cristina has not yet been notified," an aide to the former president told The French Press Agency.

The former president is accused of signing a deal with Tehran to allow Iranian officials suspected of ordering the attack on the Jewish center to be interviewed by Argentine magistrates in Tehran rather than in Buenos Aires.

Kirchner, 64, who had two four-year terms in office, is due to take her seat in the Senate next week after her election victory in October crowned a political comeback and granted her immunity from imprisonment in several corruption cases.

The Senate will now have to vote on lifting her immunity at the judge's request, for which a two-thirds majority is needed.

Kirchner's leftist alliance in the Senate has a total of 32 seats, but only around a dozen senators are in the Kirchner camp.

The center-right Cambiemos alliance of President Mauricio Macri has 25 seats in the upper house.

The ex-head of the Federal Intelligence Agency, Oscar Parrilli, was ordered not to leave the country.

Bonadio took over the case after prosecutor Alberto Nisman, which was filed four days before his mysterious death on January 18, 2016.

The Jewish center bombing case is the most serious before Kirchner, who is facing trial in several other cases involving corruption and money-laundering stemming from her years as president.

Several prominent members of her former government have been detained on corruption charges in recent weeks, including ex-public works minister Julio De Vido and Amado Boudou, Kirchner's vice-president from 2011-2015.