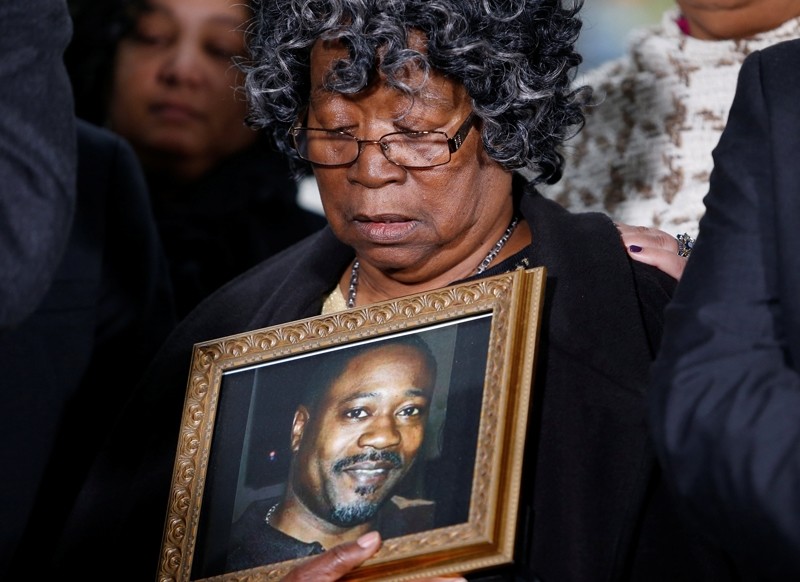 Judy Scott looks over a photo of her son Walter Scott during a news conference after former police officer Michael Slager was sentenced to 20 years in prison, in Charleston, South Carolina, U.S., December 7, 2017. (Reuters Photo)
by Dec 08, 2017 12:00 am

A former police officer in the US state of South Carolina was sentenced Thursday to 20 years in federal prison for civil rights violations committed in the fatal shooting of an unarmed black man who was fleeing on foot after a traffic stop.

A judge in Charleston, South Carolina, sentenced Michael Slager, formerly a police officer in North Charleston, in the case. Slager is white.

The 2015 killing of Walter Scott, which was captured on video by a bystander, touched off protests against police brutality.

The shooting was one in a series of police killings of unarmed suspects that followed the shooting of unarmed black teenager Michael Brown in Ferguson, Missouri. That killing launched the Black Lives Matter movement and made questions about deadly force used by police officers into a national issue.

US District Judge David Norton sentenced Slager, 36, after tearful testimony from friends and family members of Slager and Scott.

Slager said he fired in self-defence when Scott took his taser. He was prosecuted for murder last year in state court, but the case ended in a hung jury.

Slager pleaded guilty in May to a federal charge of violating Scott's civil rights, admitting that he wilfully used deadly force when it was objectively unreasonable under the circumstances. Slager fired eight shots, hitting Scott from behind with five rounds.

Scott was stopped for driving with a broken brake light.

"Law enforcement officers have the noble calling to serve and protect," US Attorney General Jeff Sessions said. "Officers who violate anyone's rights also violate their oaths of honour, and they tarnish the names of the vast majority of officers who do incredible work. Those who enforce our laws must also abide by them."

Slager is likely to get credit for the more than a year he already has spent in jail during his trial, but otherwise is expected to serve out the duration of the sentence in a federal prison.