US cities seek voice in migration talks after Trump walks out 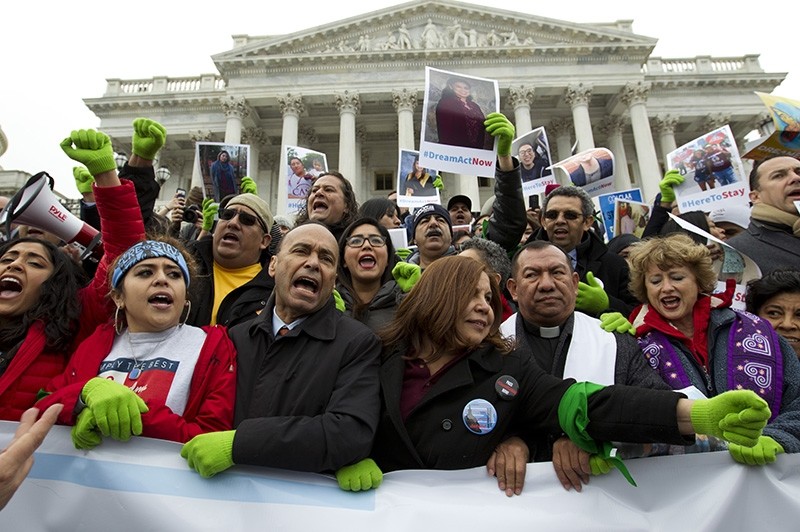 Demonstrators protest outside of the U.S. Capitol in support of the Deferred Action for Childhood Arrivals (DACA), and Temporary Protected Status (TPS), programs, during an rally on Capitol Hill in Washington, Dec. 6, 2017. (AP Photo)
by Dec 13, 2017 12:00 am

More than a dozen U.S. cities have requested a role in global talks on responding to ever-larger waves of people on the move, days after U.S. President Donald Trump exited the process.

The cities, led by New York and including Chicago, Washington and Atlanta, hope to take part in negotiations to agree the first international compacts on migration and refugees, due to be adopted by the end of next year.

Last week, they joined more than 130 cities around the world seeking formal entry to the two sets of negotiations scheduled to start in February.

"While our national government may decline to engage the international community on this urgent challenge, it is imperative that cities join the discussion," Penny Abeywardena, New York City's commissioner for international affairs, told the Thomson Reuters Foundation.

The U.S. government withdrew from the migration talks early in December, with Secretary of State Rex Tillerson noting the process "could undermine the sovereign right of the United States to enforce our immigration laws and secure our borders."

The United States has not pulled out of the compact on refugees.

Bitta Mostofi, acting commissioner of the New York City Mayor's Office of Immigrant Affairs, said cities are tasked with providing support to all residents, from housing to healthcare and education.

"Our first-hand experiences are essential to ensuring that international guidelines truly meet the needs of refugees and migrants," said Mostofi.

National U.S. leaders are becoming "increasingly isolationist, xenophobic and disconnected from cities' values of inclusivity and growth", she added.

Trump has endorsed a plan that would see legal immigration to the United States cut in half. His administration has also said it will allow in 45,000 refugees this fiscal year, less than half of what was proposed under the previous president, Barack Obama.

The U.S. decision not to take part in the migration negotiations was made public on Dec. 3, as the international community gathered in Puerto Vallarta in Mexico for a key preparatory session ahead of next year's talks.

By mid-week, 14 U.S. cities and one county had signed onto a declaration presented by Montreal's new mayor, Valérie Plante, on behalf of Metropolis, a cities' network.

The declaration urges national governments and international agencies to see cities as "partners" in defining and implementing global migration policy, and to give them "a seat at the table" in the discussions on the new pact.

Government and U.N. officials, including the head of the U.N. refugee agency, have already indicated their openness to working more closely with cities.

A separate letter was sent to U.N. refugee chief Filippo Grandi calling on him to allow cities to participate in a similar preparatory session for the refugees compact this week in Geneva.

Many of the cities that want a voice in next year's negotiations are among those most significantly affected by migration, which has been at record highs.

They include Montreal and New York, according to an October report on 22 cities most affected by migration globally.

Researchers with the World Economic Forum and consultancy PwC said those cities' most pressing concerns were to provide affordable housing, strengthen healthcare systems, offer education for different language speakers and attain "social cohesion" in the face of rising migration levels.