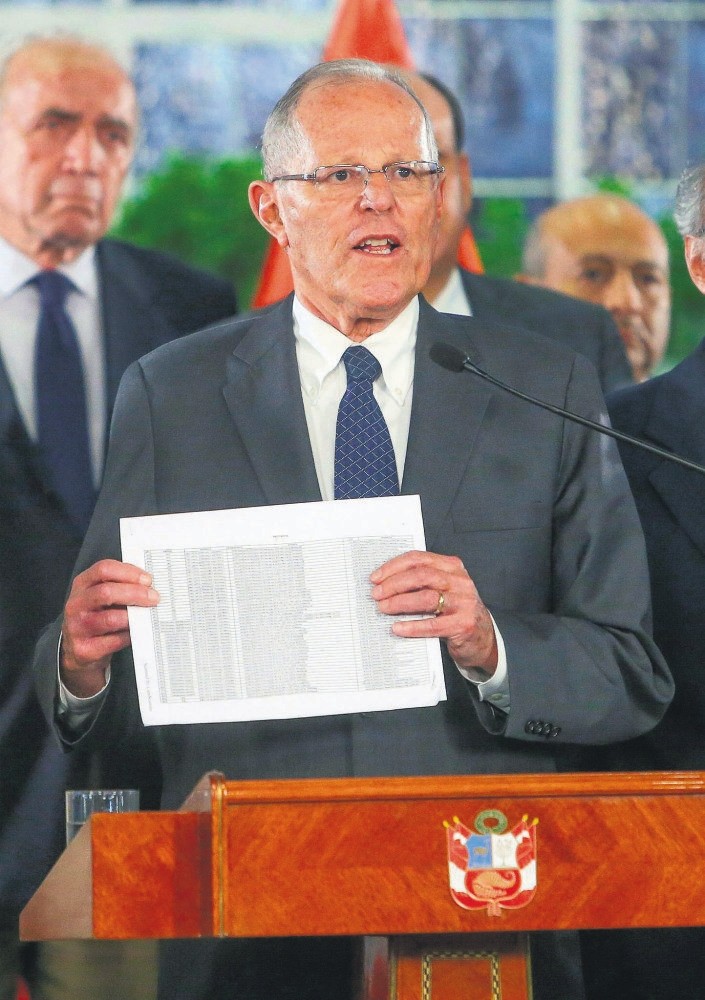 Peru's President Pedro Pablo Kuczynski late Thursday rejected demands to resign, brushing aside an opposition ultimatum to step down or face impeachment over allegations he received bribes from Brazilian contractor Odebrecht. "I am not going to abdicate my honor, my values or my responsibilities as president," Kuczynski said in a televised speech to the nation, backed by his ministers. "I won't run, I won't hide nor do I have any reason to do so," he said, promising to cooperate with investigations by Congress and the office of the country's attorney general. The right-wing Popular Force party, which controls the Congress, had warned it would begin impeachment proceedings against him if he did not resign by Thursday.

Odebrecht, a Brazilian engineering and construction giant at the center of multiple corruption cases throughout Latin America, revealed on Wednesday it had paid Kuczynski five million dollars in consulting fees between 2004 and 2013.

For part of that period, Kuczynski was head of the economy and chief of cabinet for then-president Alejandro Toledo, whom Odebrecht said it paid $20 million in kickbacks to win a contract managing a highway project. In his speech, Kuczynski said he would not step down because "it cost us a lot to recover democracy, and we are not going to lose it."

Odebrecht said it paid $782,000 to a firm owned by Kuczynski, Westfield Capital, while he was Toledo's economy minister and chief of cabinet. It paid another $4.05 million to First Capital, a company that Kuczynski worked for that belonged to a former business partner.

He said he had no direct relationship with First Capital, although he acknowledged working as a consultant for it on an Odebrecht project, insisting it was legal.

He said Westfield Capital did belong to him, but said, "I never was in charge of the company's management or administration when I held public office."

He said both companies' contracts were managed by Gerardo Sepulveda, a Chilean.

Kuczynski, a former Wall Street banker, had denied receiving any money from Odebrecht until last Saturday when he admitted to having done consulting work for the firm. He did not elaborate.

Two of his consultancies were related to a project for an inter-oceanic highway linking the Atlantic to the Pacific, a mega contract Odebrecht said it bribed Toledo to get.