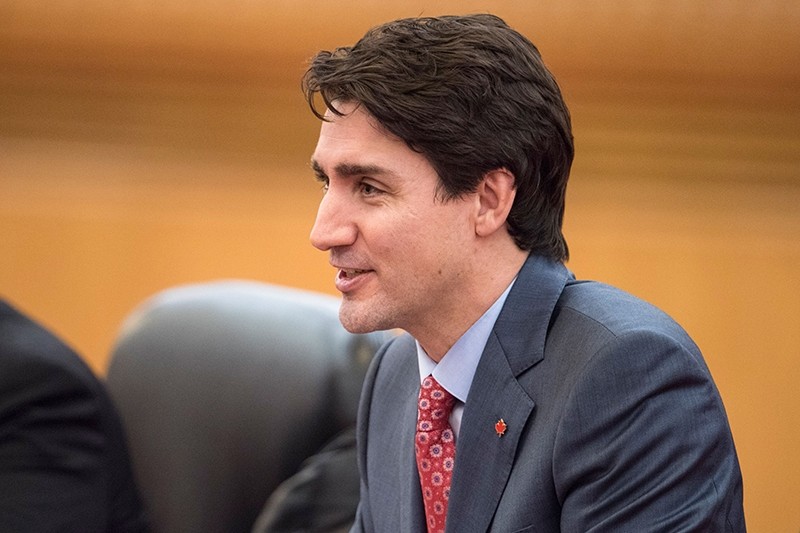 Canada's Prime Minister Justin Trudeau speaks to China's Premier Li Keqiang during a meeting at the Great Hall of the People in Beijing (AFP Photo)
by Associated Press Dec 21, 2017 12:00 am

Trudeau became the country's first prime minister found to have violated federal conflict of interest rules. He apologized and said he would seek guidance on such vacations in the future. He isn't expected to be sanctioned or penalized.

Ethics commissioner Mary Dawson said in a report that Trudeau broke laws that prohibit a government minister from accepting gifts or advantages that could reasonably be seen as influencing government decisions.

The only exception is if the person providing the gift is a friend, but Dawson said that didn't apply in the case of the Aga Khan, a philanthropist and hereditary spiritual leader to the world's approximately 15 million Ismailis. Trudeau has repeatedly called the Aga Khan a longtime family friend who was a pallbearer at his father's funeral. The late Prime Minister Pierre Trudeau and the Aga Khan were friends.

Dawson said the Aga Khan and his foundation were registered to lobby and Justin Trudeau didn't properly recuse himself on two occasions in May 2016 from government meetings about a 15 million Canadian dollar ($12 million) grant to the endowment fund of the Global Centre for Pluralism, where the Aga Khan is chairman of the board.

A year after Trudeau became leader of the Liberal Party, the Aga Khan sent a standing invitation for Trudeau and his family to visit Bells Cay. Trudeau's wife, Sophie Gregoire Trudeau, contacted the Aga Khan's daughter about vacationing on the island in March 2016 and then over Christmas last year. In both cases, the Trudeaus were told the Aga Khan and his family might not be present.

Trudeau said he was sorry he didn't clear his vacation with the ethics commissioner and said he would now.

"I fully accept the report of the commissioner. Her responsibility is to protect the integrity of the office. She made a determination that he is not a family friend. I still consider him a family friend," Trudeau said.

"It is important that as we move forward that we learn from this mistake. I take full responsibility for it. We need to make sure that the office of the prime minister is without reproach."

Trudeau later stumbled over his words and looked flustered when asked by a reporter why it didn't occur to him that his vacation might not be OK.

Dawson said Aga Khan developed a friendship with Trudeau's father in the late 1960s but is not a friend of the current prime minister.

"Justin Trudeau had no personal or private interactions with the Aga Khan and his family between 1983 and April 2013, when he became Leader of the Liberal Party of Canada, except for his father's funeral in 2000," she wrote.

Nelson Wiseman, a political scientist at the University of Toronto, said the finding would tarnish Trudeau's image for only a brief period.

"Parliament is free to impose whatever penalty it chooses, but Trudeau has nothing to fear in my opinion as party discipline is very strong and the Liberals won't do anything. I believe this affair will have minimal effect on public opinion," Wiseman said.

Trudeau said he would vacation in the Canadian Rockies and at an official residence outside Ottawa this year.