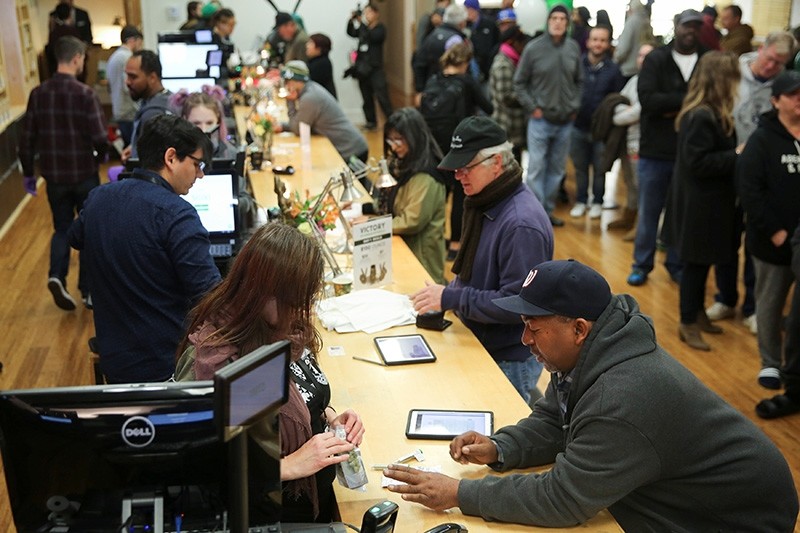 Customers purchase marijuana at Harborside, one of California's largest and oldest dispensary dispensaries of medical marijuana, on the first day of legalized recreational marijuana sales in Oakland, California, U.S., January 1, 2018. (Reuters Photo)
by Jan 02, 2018 12:00 am

Shops selling marijuana opened for business in California on Monday, as it became the largest U.S. state to allow the purchase of the drug for recreational use.

"They started coming at 6 am, we opened at 7 am," said Ruthie with Torrey Holistics in San Diego. "We've seen a lot of customers," she added.

Jessica, who works at A Green Alternative also in San Diego, had the same experience: "We have been very busy," she said.

Those stores were among the lucky ones that received their sale licenses from the state and local officials on time, while other shops dpa spoke to said they were still waiting.

Users can now buy legal cannabis products in Oakland, Berkeley, San Jose, Santa Cruz, San Diego and a few other locales, as California joins seven other states and the District of Columbia that have passed laws allowing marijuana for recreational use.

In California, where medical marijuana has been legal since 1996, the pot industry means big business.

With the legalization of recreational marijuana the market is expected to increase to 3.7 billion dollars this year and to over 5 billion dollars in 2019, according to the Business Insider.

The new California law, passed by voter referendum in 2016, allows people over 21 to possess, transport, purchase, consume or share up to 28.5 grams of marijuana, and up to 8 grams of marijuana concentrates. Adults can grow up to six marijuana plants per household "out of public view." It is also illegal to consume marijuana in any public place.

Meanwhile, law enforcement officials in Los Angeles prepared to enforce the new law with the launch of a campaign called "Drive Baked, Get Booked", warning against driving while being stoned.

"Drivers caught driving impaired can expect the impact of a DUI arrest to include jail time, fines, fees, DUI classes, license suspensions and other expenses that can exceed 10,000 dollars," said the Los Angeles County Sheriffs Department.

The two largest cities in the state Los Angeles and San Francisco have not yet started issuing licenses to sell cannabis commercially for recreational use.

Los Angeles city officials say they plan to start the process of issuing licenses for the sale of recreational marijuana on Wednesday.

The city "just ran out of time" to get the necessary regulations in place, explained Adam Spiker, executive director of the Southern California Coalition, a marijuana industry group.