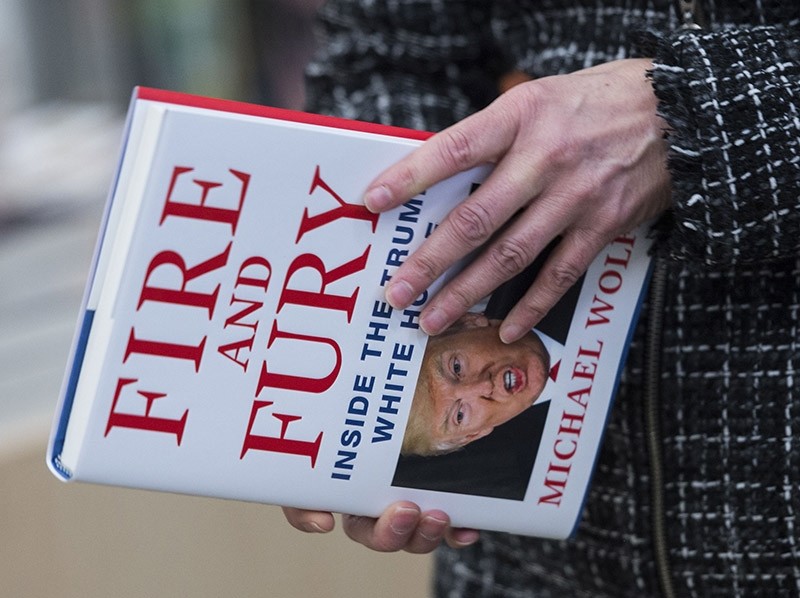 The much-hyped "Fire and Fury" book about U.S. President Donald Trump's White House hit the shelves Friday as heated discussions about it prevailed.

Written by journalist and columnist Michael Wolff, the "Fire and Fury: Inside the Trump White House" offers a number of fascinating behind-the-scenes revelations about the current U.S. administration.

The sensational book drew harsh criticism from Trump who said it was "full of lies," yet at the same time attacked his former chief strategist Steve Bannon online over his remarks quoted in the Wolff's piece.

Both Amazon and Barnes & Noble reported that hardcovers of "Fire and Fury" stood at No. 1 as of midday Friday. But they were also out of stock, with Amazon advising that shipment might take two to four weeks. Demand for the book has been insatiable since reports of its contents emerged Wednesday.

Here are some of the most eye-catching stories the book told.

Trump did not want or expect to win the election

Trump, his family and his campaign were shocked to learn that they won the presidential election. Donald Trump Jr. told a friend that after the victory announcement his father looked as if he had seen a ghost. Melania, meanwhile, was in tears — but not tears of joy, Wolff wrote in his book.

The White House was not prepared

Since no one in Trump's campaign believed in his victory the administration was not prepared for the presidency. They had no idea what they were supposed to do, Wolff said, adding that this unpreparedness resulted into chaos in the White House.

According to Wolff, Bannon described June 2016 meeting at Trump Tower between Donald Trump Jr., Trump campaign aides and a Russian lawyer as "treasonous" and "unpatriotic."

"They're going to crack Don Junior like an egg on national TV," Bannon was quoted as saying.

Ivanka revealed the secret behind her father's hair

"She often described the mechanics behind it to friends: an absolutely clean pate — a contained island after scalp-reduction surgery — surrounded by a furry circle of hair around the sides and front, from which all ends are drawn up to meet in the center and then swept back and secured by a stiffening spray," the book said.

According to the book, for "[Treasure Secretary] Steve Mnuchin and [former White House chief of staff] Reince Priebus, the president was an 'idiot.' For [chief economic advisor] Gary Cohn, he was 'dumb as s**t.' For [national security advisor] H.R. McMaster, he was a 'dope.' The list went on."

Trump is afraid of being poisoned

Wolff claimed that Trump ate at McDonald's because he believes it to be safe from poison.

"Nobody knew he was coming and the food was safely prepared," the book explained Trump's reasoning.

"If he was not having his 6:30 dinner with Steve Bannon, then, more to his liking, he was in bed by that time with a cheeseburger, watching his three screens and making phone calls — the phone was his true contact point with the world — to a small group of friends, who charted his rising and falling levels of agitation through the evening and then compared notes with one another," Wolff wrote in the book.

According to Wolff, Ivanka and her husband Jared Kushner made a deal that if opportunity arose, Ivanka would run for president. The book claims Ivanka said she would be the first woman to become the U.S. president, not Hillary Clinton.

The U.S. president is obsessed with finding leaker in his White House, yet he might be the main source of the leaks.

"In his calls throughout the day and at night from his bed, he often spoke to people who had no reason to keep his confidences. He was a river of grievances, which recipients of his calls promptly spread to the ever-attentive media," the book said.

Trump is not much of a reader

"He didn't process information in any conventional sense. He didn't read. He didn't really even skim. Some believed that for all practical purposes he was no more than semi-literate," Wolff claimed in the book.