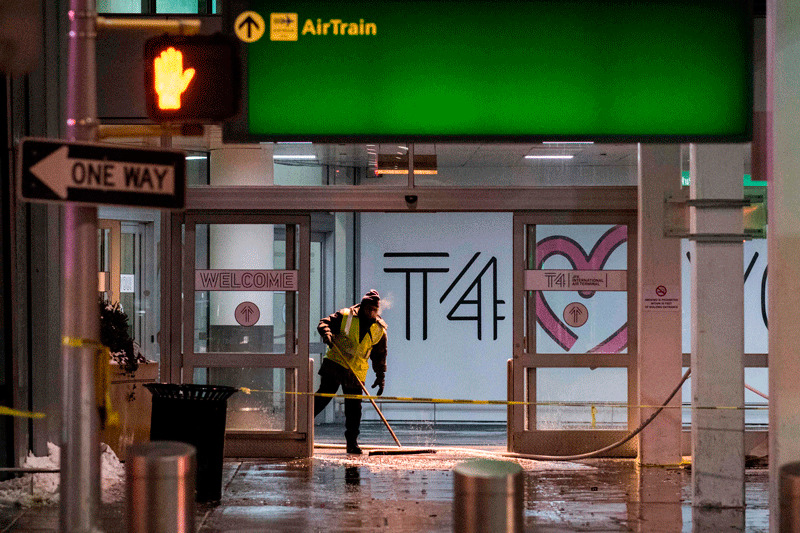 Workers sweep water from the floor of the arrivals area at John F. Kennedy International airport's terminal 4, in New York (AFP Photo)
by Compiled from Wire Services Jan 08, 2018 12:00 am

A water pipe break in one of the terminals at New York's Kennedy Airport on Sunday added to the delays at the beleaguered airport trying to recover from the aftermath of a snowstorm that has stranded thousands of passengers.

In a statement, the Port Authority of New York and New Jersey said a water pipe that feeds a sprinkler system in the privately operated Terminal 4 broke at about 2 p.m., causing water to flood the terminal and significantly disrupt operations.

"What happened at JFK Airport is unacceptable, and travelers expect and deserve better," said Port Authority Executive Director Rick Cotton. "While the water pipe break that occurred appears to be weather-related, we have launched an investigation into the incident to determine exactly what occurred and why an internal pipe was not weather protected and whether any other failures contributed to this disruption."

The incident highlighted complaints about poor infrastructure serving the US financial capital, home to 8.5 million people, with a crisis in the subway and derailments in recent years on commuter trains.

The pipe break sent about three inches (eight centimeters) of water gushing onto the floor of the terminal. Video shows streams cascading from a ceiling and people slogging through pools of water.

Power to the affected areas was temporarily shut off for safety reasons and additional staffing and busing operations were deployed to assist travelers, the Port Authority said.

Following the storm, which blasted New York on Thursday, passengers were kept on planes and waited hours to retrieve luggage as flights were delayed and canceled, and a backup to get to terminal gates built up.

Carlos Koester, 52, was in New York for a week with his wife and two teens and just wanted to get home to Brazil.

"We love New York, but now we are stuck here. It's frustrating. The storm caught us and now we have been stranded here for 13 hours," Koester told the Daily News on Sunday.

In a statement released before the water pipe break, the Port Authority said Saturday's cold "created a cascading series of issues for the airlines and terminal operators."

Tempers flared for days among exhausted travelers, forced to sleep on the floor of terminals, with others stranded on planes for hours waiting to access a gate and massive delays in baggage claim.

Hugo Zylberberg, a 28-year-old researcher, said while his 11-hour flight from Egypt was on time, it took an hour to find a gate, another hour at customs and then an hour and a half to wait for his luggage.

"There's still like a hundred people waiting for their luggage," he told French Press Agency (AFP). "I'm pretty exhausted. I'm waiting to get home. It's kind of crazy," he said. "People were starting to be pretty angry." 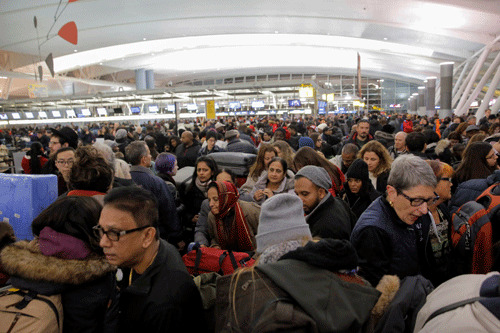 Rajesh Varadarajan, a 41-year-old software consultant en route from India to Trinidad, whose connecting flight to the Caribbean had been delayed more than 24 hours, sat JFK cut a poor comparison to airports such as Dubai or Singapore, and newer airports in his home country.

"It's far from it, because I mean just look around; there's no place to sit," he said. "Even Dunkin' Donuts is closed."

On Saturday, Terminal One was briefly closed and 94 flights canceled and 17 diverted, as the extreme cold and storm recovery "created a cascading series of issues," said the Port Authority.

The US East Coast has been gripped by days of record-breaking cold temperatures after a storm Thursday, dubbed a "bomb cyclone," which was blamed for at least 22 reported deaths.

Boston, which saw some of the heaviest snow from the storm, froze with a Sunday morning low of minus two degrees Fahrenheit (minus 19 degrees Celsius) -- matching the previous January 7 record in 1896.

Highs below freezing lingered on the East Coast as far south as North Carolina, with temperatures due to rise from Monday.