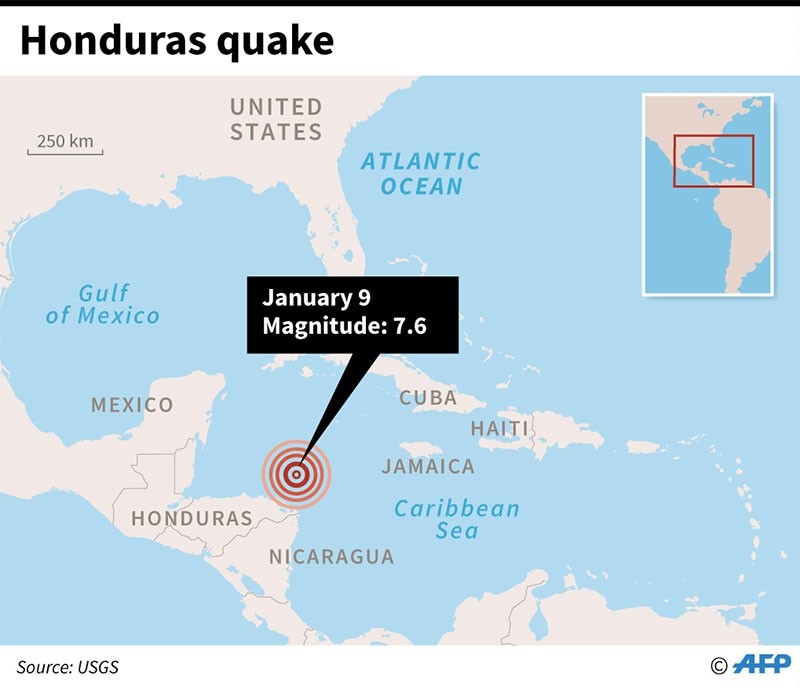 A magnitude 7.6 earthquake struck in the Caribbean Sea between the coast of Honduras and the Cayman Islands on Tuesday night.

There were no early reports of damage on land. Tsunami warning centers said no tsunami waves had been confirmed but stress that people in Puerto Rico, other Caribbean islands and the coast of Central America should be alert to the danger of a possible tsunami.

The U.S. Geological Survey measured the quake at a preliminary magnitude of 7.6. The tremor struck in the sea about 125 miles (202 kilometers) north-northeast of Barra Patuca, Honduras, and 188 miles (303 kilometers) southwest of George Town, Cayman Islands. The tremor occurred about 6 miles (10 kilometers) below the surface.

The northern coast of Honduras closest to the quake's epicenter is sparsely populated, with much of it covered by nature reserves. Some people in the capital of Tegucigalpa said they did not feel the tremor.

President Juan Orlando Hernandez via Twitter said that Honduras had activated its emergency system and asked people to remain calm.

In the Cayman Islands, Sgt. Dave McKay with Royal Cayman Islands Police told The Associated Press that hazard management officials had not issued a tsunami alert but authorities were monitoring the situation.