US democrats seek probe of Trump conflicts of interest 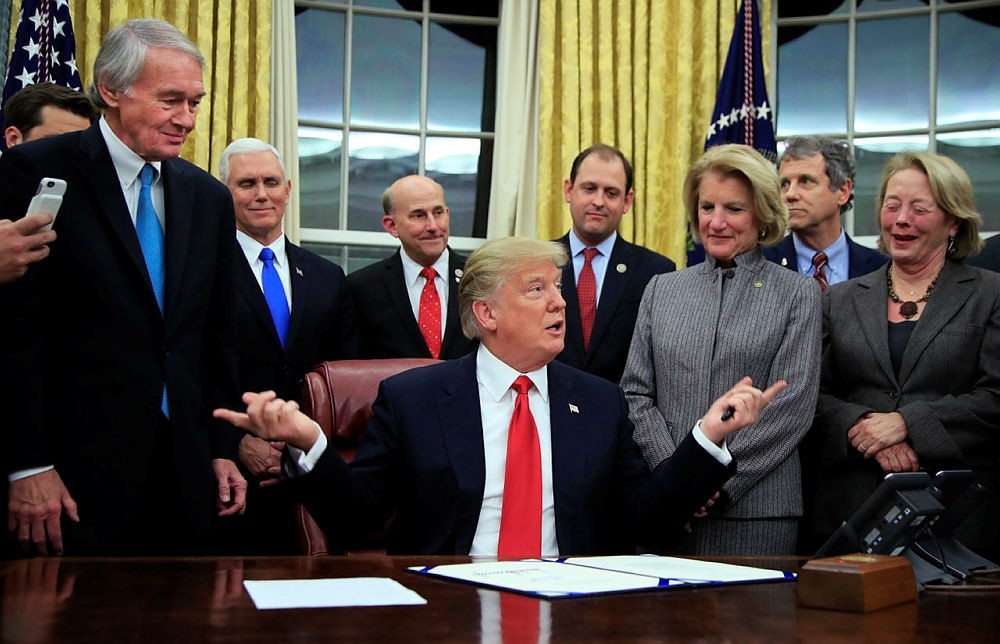 President Donald Trump speaks after signing into law the bipartisan Interdict Act, during a ceremony in the Oval Office of the White House in Washington, Wednesday, Jan. 10, 2018. (AP Photo)
by Associated Press Jan 11, 2018 12:00 am

They also sought a subpoena of Trump Organization to produce documents that were requested months ago.

The letter was sent to Chairman Trey Gowdy of South Carolina on Thursday, one year after a news conference held by Trump and his attorney announcing efforts to avoid the appearance of a conflict of interest by handing over his businesses' reins to his sons and putting his assets in a trust, among other measures. Ethics watchdogs and Democratic lawmakers have criticized those efforts as weak to begin with.

The Democrats on the House Committee on Oversight and Government Reform also asked Gowdy to issue a subpoena to compel the Trump Organization to produce, by Jan. 20, documents requested more than eight months ago on how the company was donating foreign government profits at its hotels to the U.S. Treasury.

The lawmakers also want to know whether the organization, the president or his trust will claim donations as a gift for tax purposes.

"Over the past year, President Trump and his attorneys have stalled virtually any credible oversight, and unfortunately our committee has done nothing to push back on these efforts, press for answers to these questions, or obtain documents that would assist our efforts to carry out our duties under the Constitution to act as an independent check on the president and the executive branch," the letter states.

Gowdy's office did not immediately respond to a request for comment.

A Trump Hotels spokesman said the company wouldn't be providing details on foreign government donations until next month and said it is finishing up its annual financial reporting.

The U.S. Treasury did not respond to multiple requests for comment.

The Trump Organization produced, in response to last April's bipartisan request, a glossy, eight-page pamphlet that notes hotels do not attempt to identify foreign government employees unless the individuals specifically do so themselves. It also said it won't enact any policy asking customers to identify themselves because doing so would "impede upon personal privacy and diminish the guest experience of our brand."

Rep. Elijah Cummings, D-Md., wrote to the Trump Organization in May criticizing its "meager response" and chastising it for not providing the vast majority of documents requested.

"If President Trump believes that identifying all of the prohibited foreign emoluments he is currently receiving would be too challenging or would harm his business ventures, his options are to divest his ownership or submit a proposal to Congress to ask for our consent," Cummings wrote.

Democratic members of the House oversight committee sued in federal court in November over the Trump administration's refusal to turn over information about the Trump family's lease of the Trump Hotel in Washington.