Peace talks at risk after ELN attack on Colombian military 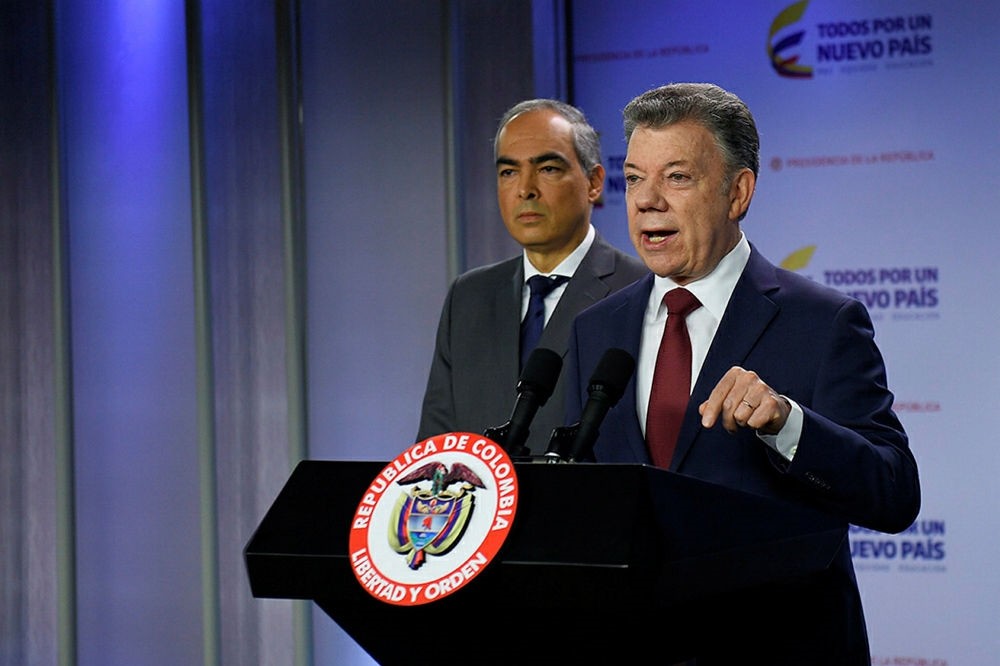 After the expiration of a temporary bilateral ceasefire, the last rebel group, ELN, launched new attacks, leading the Colombian government to suspend talks on extending the ceasefire

Colombia's President Juan Manuel Santos said new rebel attacks Wednesday have prompted him to recall his chief negotiator to peace talks with the country's last remaining insurgent group in a setback for efforts to end a half-century of political violence in the South American nation.

The reported clashes came hours after the expiration of a temporary bilateral ceasefire that the United Nations, church leaders and government officials had praised as an important advance in reducing violence and moving toward an end to the nation's final rebel conflict.

Rebels with the National Liberation Army, known by its Spanish acronym ELN, and government delegates had both expressed hopes of reaching a new agreement on an extended ceasefire during a fresh round of peace talks that were expected to start Wednesday in Ecuador.

"Inexplicably, the ELN not only refused, but they reinitiated terrorist attacks this morning," Santos said in a short televised address, according to AP. "On the exact day new talks were slated to begin."

U.N. Secretary-General Antonio Guterres will head to Colombia this weekend to support peace efforts. The Security Council reiterated its support for the peace process in Colombia, welcomed Guterres' trip and praised commitment of the government and FARC to the peace agreement. Members expressed regret at the ELN attacks and said they hope the government and rebel group will resume work on renewing and strengthening the ceasefire.

At the council meeting, the U.N. envoy for Colombia, Jean Arnault, said the clamor for a suspension of military action by the ELN has been unanimous throughout the country, "notwithstanding the many imperfections of the ceasefire," as reported by Reuters. But he said in light of the latest attacks it is "too early to venture a sense of what the future holds in terms of the situation on the ground and at the negotiating table."

"I would like to assure you that the government is not walking away from peace," Colombian Vice President Oscar Naranjo told the council. "I think that our government has demonstrated to the entire world that we, in particular our president, are proponents and champions of peace. We are peacemakers and peacebuilders."

Colombia reached an historic peace agreement with the nation's largest rebel group, the Revolutionary Armed Forces of Colombia, or FARC, in late 2016, ending Latin America's longest-running conflict. The end of that conflict has been hailed internationally though it has also opened a new power struggle in remote areas previously controlled by FARC rebels and still occupied by ELN combatants.

Peace talks with the smaller ELN, whose founders in the 1960s included radical Roman Catholic priests, began last February. While the FARC peace agreement is credited with paving the way toward negotiations with the ELN, analysts say peace talks with ELN rebels also present distinct challenges.

Under the temporary agreement, the 1,500-member ELN pledged to renounce hostage-taking, recruitment of minors and attacks on infrastructure. The government in turn vowed to improve conditions for jailed rebels as well as boost protections for leftist activists in areas dominated by the ELN.

ELN guerillas were accused of violating the accord in two separate incidents that left a total of 14 people dead, including an indigenous leader. The rebels also accused the government of failing to live up to their end of the accord during the 101-day ceasefire. Unlike the FARC, ELN rebels have a more diffuse hierarchy that would make abiding by the terms of a ceasefire more difficult to achieve.