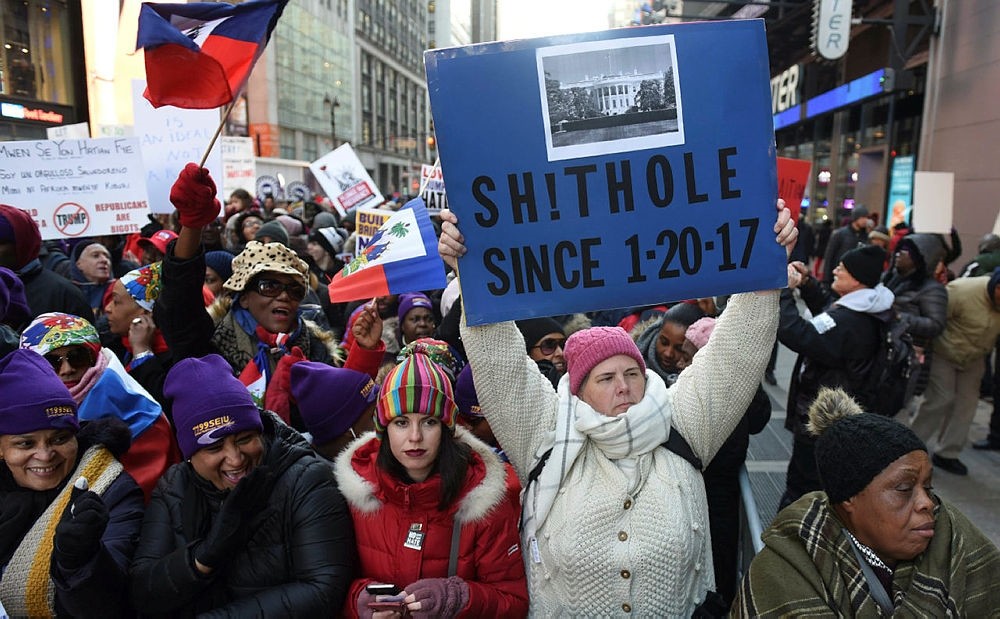 Protesters carry signs during a march on Martin Luther King Jr. Day in Times Square, called Rally Against Racism: Stand Up for Haiti and Africa in New York January 15, 2018. (AFP Photo)
by Associated Press Jan 22, 2018 12:00 am

U.S. Vice President Mike Pence on Monday defended President Donald Trump on his recent comments disparaging immigration from Africa and Haiti, telling The Associated Press that the president's "heart" is aimed at a merit-based system that is blind to immigrants' "race or creed."

Pence, in an interview with the AP from Jerusalem, said the president was intent on implementing a merit-based system that encourages immigration by those who will "contribute to a growing American economy and thriving communities."

"I know the president's heart and I know that what President Trump wants to do is reform immigration to make our system one that puts the interests of America first," Pence said. He added that immigrants should be considered on their merits, "regardless of what country they come from or what their race and creed is."

Pence did not directly answer a question about whether Trump's language was appropriate, but said the president's intentions have "everything to do with moving our country to a merit-based system."

He was responding to reports that Trump, in a private meeting with legislators earlier this month, challenged immigration from "shithole" African countries, disparaged Haiti and said the U.S. should welcome more immigration from countries like Norway.

The vice president also dismissed an adult film star's account of a sexual encounter with Trump in 2006, questioning its validity.

"I'm just not going to comment on the latest baseless allegations against the president," Pence said. "My focus is on serving the president, advancing the priorities of the administration, advancing American interests and that's where it will stay."

The Wall Street Journal last week reported that Trump's personal lawyer brokered a payment to pornographic actress Stormy Daniels in October 2016 to prohibit her from publicly discussing the alleged affair before the presidential election.

Daniels' real name is Stephanie Clifford. Trump's attorney, Michael Cohen, has denied there was any relationship. He gave the Journal a statement from a person identified as Stormy Daniels denying receiving "hush money."

The AP reported that a tabloid magazine held back from publishing her 2011 account of their relationship after Cohen threatened to sue.

Pence, on a four-day visit to the Middle East while Washington grapples with a government shutdown, said in the AP interview that he was "hopeful that Democrats in the Senate will see their way clear to reopen the government."

Pence spoke after delivering to the Knesset a major address in which he announced Trump's plans to expedite the move of the U.S. embassy from Tel Aviv to Jerusalem by the end of next year. He was the first sitting American vice president to address the parliamentary body.

Pence said he had received no blowback from world leaders after Trump made the immigration comments.

"I just think leaders around the world appreciate the president's renewed engagement. He appreciates the relationships that he's forged with them," Pence said.

A number of world leaders publicly denounced the comments as racist.