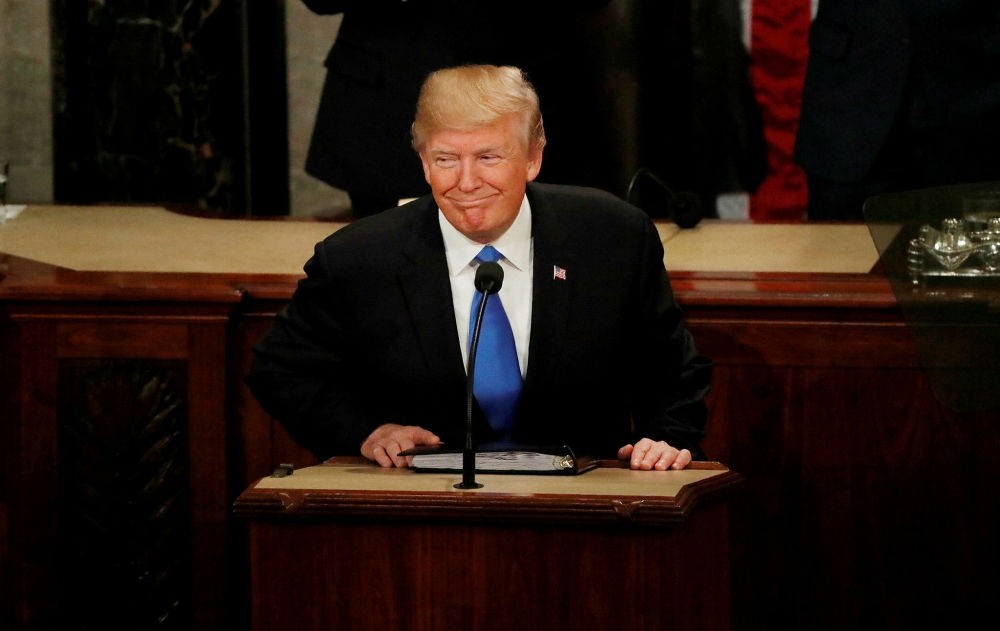 U.S. President Donald Trump delivers his State of the Union address to a joint session of the U.S. Congress on Capitol Hill, Washington, Jan. 30.
by Compiled from Wire Services Feb 01, 2018 12:00 am

President Donald Trump has signed an executive order to keep open the U.S. military prison at Guantanamo Bay, marking a formal reversal of his predecessor's eight-year effort to shut it down.

Trump made it clear during his campaign that he wanted Guantanamo to remain open and to "load it up with some bad dudes," but he has not yet sent a new detainee to the facility.

The order, which Trump signed Tuesday night just before delivering his first State of the Union address, says the U.S. maintains the option to detain additional enemy combatants at the detention center in Cuba when lawful and necessary to protect U.S. national security. It requires the defense secretary to recommend criteria for determining the fate of individuals captured by the United States in armed conflict, including sending them to Guantanamo.

"Terrorists who do things like place bombs in civilian hospitals are evil," Trump said. "When possible, we have no cho

ice but to annihilate them. When necessary, we must be able to detain and question them. But we must be clear: Terrorists are not merely criminals. They are unlawful enemy combatants."

"In the past, we have foolishly released hundreds and hundreds of dangerous terrorists only to meet them again on the battlefield, including the [Daesh] leader, al-Baghdadi, who we captured, who we had, who we released," he said, referring to the Daesh group leader Abu Bakr al-Baghdadi.

The office of the Director of National Intelligence said in its most recent report on the subject that about 17 percent of the 728 detainees who have been released from Guantanamo are "confirmed" and 12 percent are "suspected" of re-engaging in militant activities.

But the vast majority of those re-engagements occurred with former prisoners who did not go through the security review that was set up under President Barack Obama. Trump's order says this review process would continue to be used to determine whether detainees should be held.

Obama signed an order on his first full day in office in 2009 ordering efforts to shutter Guantanamo within a year, but his plan was thwarted by mostly Republican opposition in Congress. Instead, his administration reduced the inmate population to 41 from 242 during his eight years in office.

The detention center, which President George W. Bush opened after Sept. 11, 2001, reached a maximum population of about 680 in the summer of 2003. Bush transferred about 500 out before he left office. Obama transferred 197 detainees out, leaving 41, including five cleared for release. No detainee has been sent to the Guantanamo prison since 2008. Detainees at Guantanamo accused of supporting militants have faced military tribunals, rather than trials in the U.S. legal system.

Trump pushes hardline immigration policies even as he urges unity

Trump also urged lawmakers on Tuesday to work toward bipartisan compromises, but pushed a hard line on immigration, insisting on a border wall and other concessions from Democrats as part of any deal to protect the children of illegal immigrants.

Trump, in his first State of the Union speech, gave no ground on the contentious issue of whether to shield young immigrants known as "Dreamers" from deportation.

Aiming to keep conservative supporters happy as he looks to November congressional elections, Trump stood by a set of principles opposed by Democrats, including the border wall with Mexico and new restrictions on how many family members that legal immigrants can bring into the United States.

"Tonight, I call upon all of us to set aside our differences, to seek out common ground, and to summon the unity we need to deliver for the people we were elected to serve," Trump said in his address.

Trump used the hour-and-20-minute speech, given annually by presidents to Congress, to try to overcome doubts about his presidency at a time when he is battling a probe into his campaign's alleged ties with Russia and suffering low job approval ratings.

The speech was short on details about Trump's policy proposals.

But his sober, measured approach was welcomed by the public. A CNN/SSRS snap poll said 48 percent of those surveyed had a "very positive" response to the speech and 22 percent "somewhat positive."

There was little sign of unity inside the House of Representatives chamber where Trump spoke. Republican lawmakers cheered wildly at the president's applause lines. Democrats often sat in their seats silently and many booed when he laid out his immigration proposals.

The unity plea will first be put to the test in his drive for a compromise on protecting 1.8 million Dreamers - people brought illegally to the country as children - who face a March 5 deadline on whether they can begin to be deported.

"My Democratic colleagues can say he didn't move enough, but you can't deny he moved a lot. There are people in his core base who think he has moved way too far."

But Senator Patrick Leahy, a Vermont Democrat and the longest-serving senator, said Trump's words about unity, after a year of "divisive actions, petty insults and disgraceful race-baiting ... ring hollow."

Trump said he was "extending an open hand" for an immigration deal and that he would provide Dreamers a pathway to citizenship over 10 to 12 years in exchange for funding the border wall, which he promised during his campaign and restrictions on legal immigration.

He called his plan a "down-the-middle compromise," but some Democrats hissed when he said he wanted to rein in "chain migration," the ability of legal immigrants to bring a wide-ranging number of family members into the country. "Let's come together, set politics aside and finally get the job done," Trump said.