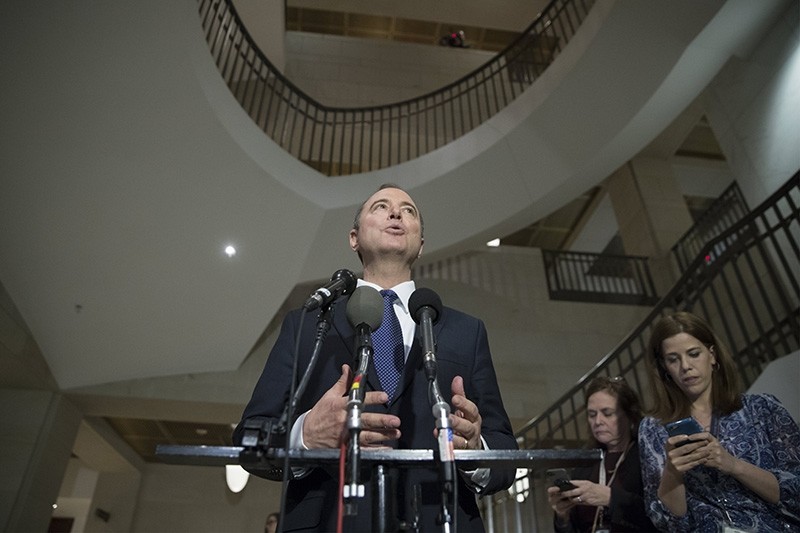 Democratic Representative from California and Ranking Member of the House Permanent Select Committee on Intelligence Adam Schiff (C) delivers remarks to members of the news media following a meeting (EPA Photo)
by Associated Press Feb 06, 2018 12:00 am

The House intelligence committee's probe of Russian interference in the 2016 election spun further into charges and counter-charges among angry U.S. lawmakers and President Donald Trump as the panel voted to release a second classified memo about whether the FBI and Justice Department conspired against him.

This memo was written by Democrats on the panel who are pushing back against a GOP document, declassified by Trump last week, that criticizes the methods the FBI used to obtain a surveillance warrant on a onetime Trump campaign associate. The Democratic document attempts to counter some of the arguments and evidence put forward by the Republicans.

The battle of classified memos has further deepened the partisan divide on the committee, which is supposed to be jointly investigating the Russian meddling and possible connections between Russia and the Trump presidential campaign. It also takes attention from the separate investigations by special counsel Robert Mueller and the Senate intelligence committee.

Trump said over the weekend that the GOP memo "totally vindicates" him. Both Republicans and Democrats disputed that, and Democrats also bemoaned the release of formerly classified information and the possibility the precedent could compromise future investigations.

After the House committee's Monday evening vote, which was unanimous, Rep. Adam Schiff of California, the panel's top Democrat, said he believed the Democratic document would "help inform the public of the many distortions and inaccuracies in the majority memo." But he also said he was concerned about "political redactions" the White House might make before its release.

The president now has five days to decide whether to allow the material's publication.

Schiff said he would compare any deletions the FBI and the Department of Justice might request with any White House edits to try to identify any attempts to withhold information for political purposes.

Texas Republican Rep. Mike Conaway, a leader of the panel's Russia probe, said after the vote that parts of the document should not be released.

"There are things in the memo that I would be uncomfortable with if the White House did not redact," he said.

Tensions between Trump and the Democrats were high before the vote, as the president and Schiff traded insults on Twitter Monday morning — less than a week after Trump called for more bipartisanship in his State of the Union address.

Trump tweeted that Schiff is "one of the biggest liars and leakers in Washington" and "must be stopped."

Schiff quickly shot back: "Instead of tweeting false smears, the American people would appreciate it if you turned off the TV and helped solve the funding crisis, protected Dreamers or ... really anything else."

As a second week of memo-watching commenced, the committee was also prepared to interview Steve Bannon, Trump's former chief strategist, as part of the Russia probe. But that meeting was put off, according to two people familiar with the committee's schedule. They declined to be named because the schedule is private.

It was unclear if the House would hold Bannon in contempt. He has been subpoenaed and has now delayed answering the panel's questions three times as the committee negotiates with his lawyer and the White House over the terms of his interview.

At issue is whether the White House will allow him to answer questions about his time in the Trump administration.

As the committee continues to negotiate Bannon's interview, Democrats have been raising questions about whether the committee chairman, Rep. Devin Nunes of California, coordinated with the White House in drafting the GOP memo. After the document's release last week, the president quickly seized on it to vent his grievances against the nation's premier law enforcement agencies.

"I think it's very possible his staff worked with the White House," Schiff added, referring to Nunes.

Trump praised Nunes in a separate tweet Monday, calling him "a man of tremendous courage and grit, may someday be recognized as a Great American Hero for what he has exposed and what he has had to endure!"

The Republican memo released last Friday alleges misconduct on the part of the FBI and the Justice Department in obtaining a warrant under the Foreign Intelligence Surveillance Act to monitor former Trump campaign foreign policy adviser Carter Page. Specifically, the memo takes aim at the FBI's use of information from former British spy Christopher Steele, who compiled a dossier containing allegations of ties between Trump, his associates and Russia.

The underlying materials that served as the basis for the warrant application were not made public. Even as Democrats described that memo as inaccurate, some Republicans quickly cited it — released over the objections of the FBI and Justice Department — in their arguments that the FBI investigation that Mueller inherited is politically tainted. Still, some Republicans, including Rep. Trey Gowdy of South Carolina and House Speaker Paul Ryan have said the memo should not be used to undermine Mueller's probe.

The GOP memo's central allegation is that agents and prosecutors, in applying in October 2016 to monitor Page's communications, failed to tell a judge that Steele's opposition research was funded in part by Hillary Clinton's presidential campaign and the Democratic National Committee. Page had stopped advising the campaign sometime around the end of that summer.

Steele's research, according to the memo, "formed an essential part" of the warrant application. But it's unclear how much or what information Steele collected made it into the application, or how much has been corroborated.