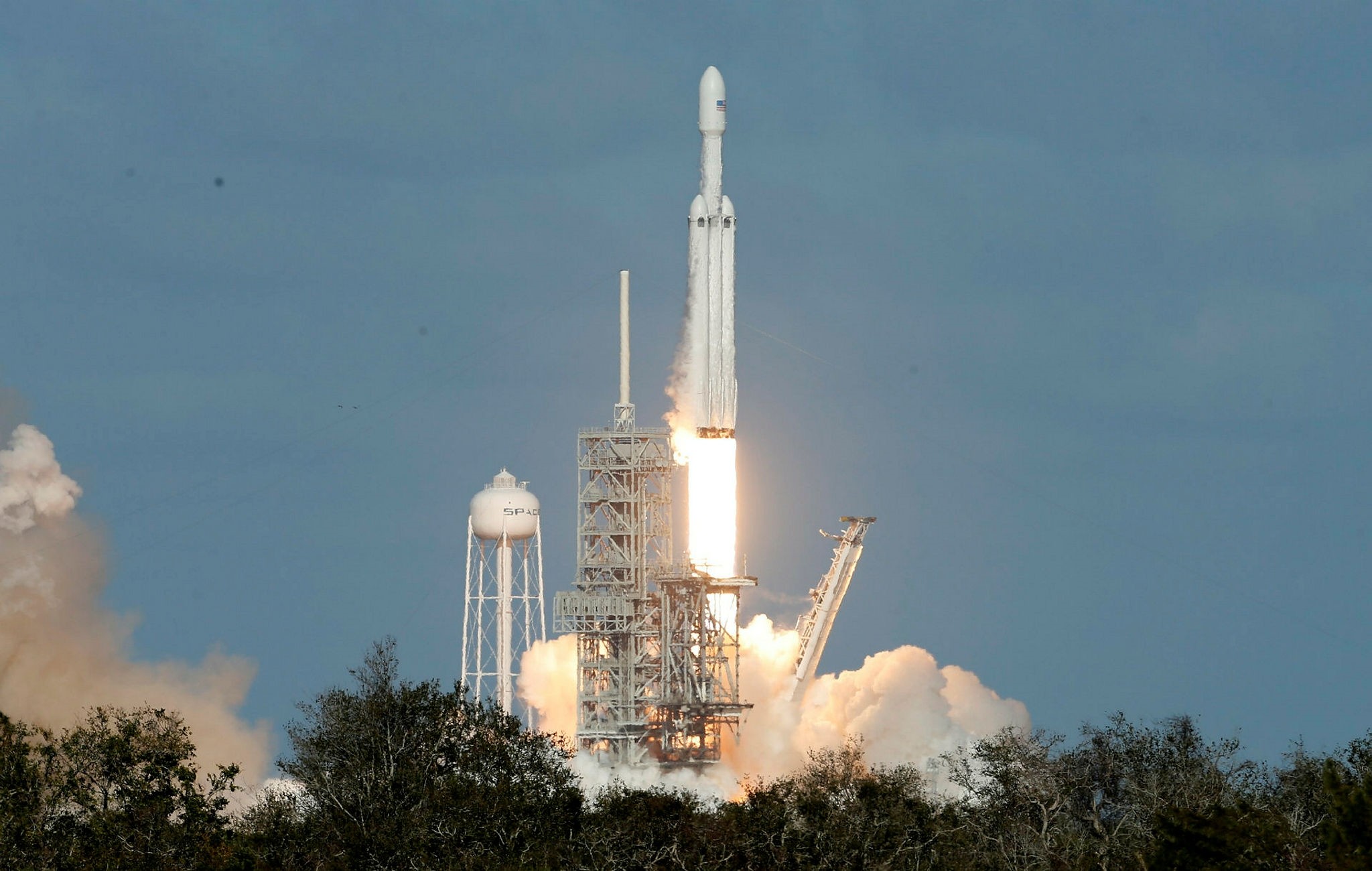 SpaceX's Falcon Heavy rocket, the most powerful of its kind in operation today and aimed at toting supplies to the Moon or even Mars someday, blasted off from Kennedy Space Center towards Mars on Tuesday.

The three boosters and 27 engines roared to life at Kennedy Space Center, as thousands jammed surrounding beaches, bridges and roads to watch the rocket soar, delayed more than two hours by high wind.

Two of the boosters were recycled and programed to return for a simultaneous touchdown at Cape Canaveral, while the third, brand new, set its sights on an ocean platform some 300 miles offshore.

Loaded with Musk's own red Tesla roadster, a mannequin in a spacesuit, and a playlist consisting of David Bowie's "Space Oddity," the monster rocket's maiden voyage has captured the world's imagination.

Will it sail into deep space, sending an Earth-made car into a distant orbit around the Sun? Or will it explode before touching down on its target?

Musk himself put the odds of success or failure at no better than 50-50 before the much-awaited launch.

"It is guaranteed to be exciting, one way or another," the quirky 46-year-old South African-born space visionary and wealthy businessman told reporters on the eve of the launch.

"I would consider it a win if it just clears the pad and doesn't blow the pad to smithereens," he added.

The launch is likely to catch the eye of the U.S. space agency NASA as a way to fast-track its plans to reach the Moon again for the first time since 1972.

The Falcon Heavy rose from the same launch pad used by NASA nearly 50 years ago to send men to the moon. With liftoff, the Heavy became the most powerful rocket in use today, doubling the liftoff punch of its closest competitor.

It can carry twice the payload of United Launch Alliance's Delta IV Heavy, at a far lower cost -- about $90 million per launch compared to $350 million for its competitor.

But the Falcon Heavy is not the most powerful rocket ever -- just the biggest in operation today.

The Saturn V rocket that propelled astronauts to the Moon could deliver more payload to orbit. The Soviet-era Energia, which flew twice in 1987 and 1988, was also more powerful.

The Falcon Heavy is essentially three smaller, Falcon 9 rockets strapped together, adding up to a total of 27 engines.

It was initially designed to restore the possibility of sending humans to the Moon or Mars, but those plans have shifted and now the Falcon Heavy is being considered mainly as a potential equipment carrier to these deep space destinations, Musk said Monday.

Instead, another rocket and spaceship combination being developed by SpaceX, nicknamed BFR -- alternately known as "Big Fucking Rocket," or "Big Falcon Rocket" -- would be the vehicle eventually certified for travelers.

Musk confessed that he was experiencing none of his usual pre-launch jitters, but was feeling "giddy" ahead of the lift-off.