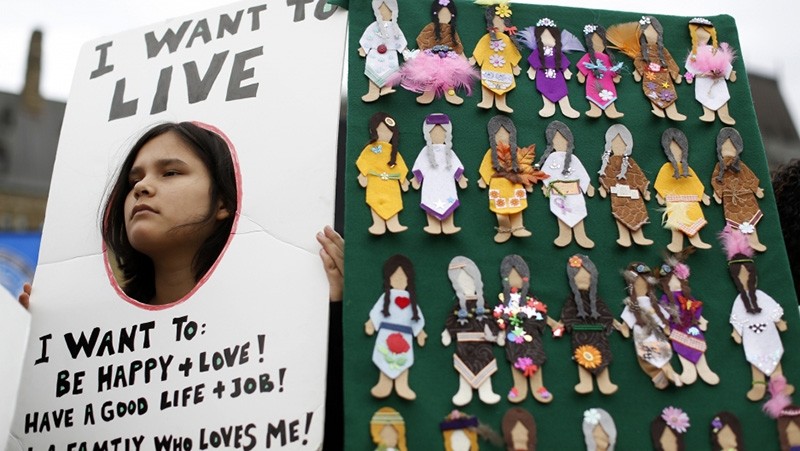 Carol-Ann Moses takes part in the Sisters In Spirit Vigil honouring the lives of missing and murdered aboriginal women on Parliament Hill in Ottawa (Reuters File Photo)
by Anadolu Agency Feb 15, 2018 12:00 am

Canada announced Wednesday that it will embark on an overhaul of the way the federal government deals with the country's indigenous population.

"We need to both recognize and implement indigenous rights," Prime Minister Justin Trudeau said in a speech to the federal House of Commons in Ottawa.

The government will work hand in glove with indigenous peoples to try to solve the endemic problems of their communities such as high suicide rates among youth, unsafe drinking water and a lack of adequate housing.

"All of these things demand real, positive action -- an action that must include the full recognition and implementation of indigenous rights," Trudeau said.

"We need to get to a place where indigenous peoples in Canada are in control of their own destiny, making their own decisions about the future."

The federal changes come at a time when Canadians are grappling with how indigenous people have been historically treated.

As many as 86,000 children were taken from their families, at times by force, and enrolled in residential schools where youngsters were too often abused both sexually and physically.

The system, to try to instill the values of the white society in native children, was in place from the late 1800s to the 1980s. The government recently agreed to pay as much as $2 billion in total compensation to survivors and to fund a program to help survivors heal.

Canada has also set up a commission to hear from families of missing and murdered indigenous girls and women. Estimates as to the number of those slain ranges as high as 4,000 between 1980 and 2012.

Many in the indigenous community feel that law authorities did not do enough to investigate the cases, let alone solve them.