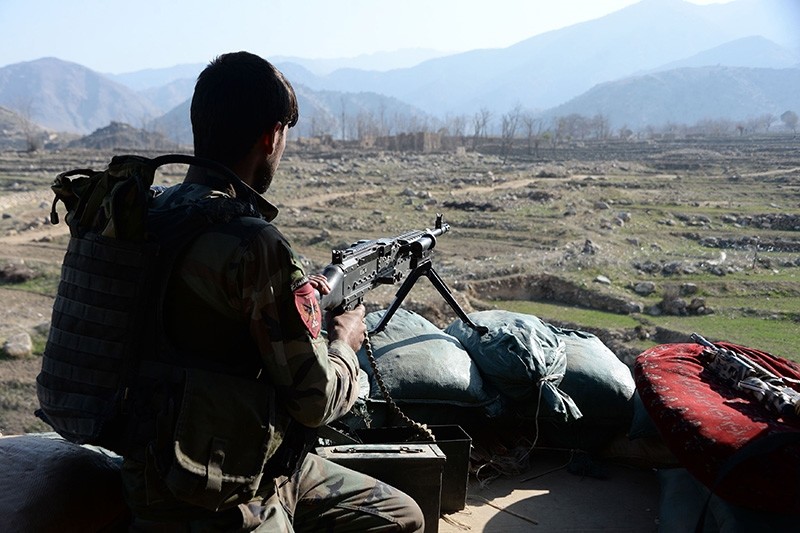 A Pentagon watchdog agency raised fresh doubts Friday about progress in the 16-year-old U.S. war in Afghanistan and suggested that restrictions on the public release of information make it difficult to gauge the effectiveness of U.S. strategy.

The Pentagon's office of the inspector general, in a report done jointly with the State Department and the U.S. Agency for International Development, said the Afghan government by the end of 2017 had not expanded its areas of control, even as the U.S. added about 3,500 troops and intensified airstrikes against the Taliban.

"On the sole quantifiable metric discussed publicly to date - expanding security to 80 percent of the Afghan population by the end of 2019 - Afghanistan made no significant progress in 2017," the report said.

That assessment underpins doubts expressed by others, including members of Congress who are impatient for progress.

Sen. Richard Burr, chairman of the Senate Intelligence Committee, said this week that recent Taliban attacks killing scores of people in Kabul make it appear the Taliban insurgency is "nowhere near folding," and that the government is incapable of protecting its own citizens.

Earlier this month, Deputy Secretary of State John J. Sullivan said after visiting Kabul and meeting with President Ashraf Ghani and other Afghan government officials that he realized it wasn't a "rosy situation." He told the Senate Foreign Relations Committee that the Taliban attacks in January were "a real shock to many people in the government."

Just this week, Dan Coats, the director national intelligence, told Congress that militant groups based in Pakistan are using that country as a haven to conduct attacks in India and Afghanistan. He said the Pakistani government is likely to maintain ties to those groups while restricting its counterterrorism cooperation with the United States.

More than 2,400 Americans have died in Afghanistan since the U.S. launched its war in October 2001 in response to the al-Qaida 9/11 attacks.

The administration touts its Afghan strategy, announced by President Donald Trump in August, as a realistic and more aggressive approach to achieving the goal prior administrations have pursued: to bring the Taliban to an Afghan peace table and to prevent terrorist groups like al-Qaida or Daesh from using the country as a launch pad for attacks on the West.

In its report Friday, the Pentagon watchdog said it is too early to judge whether the Trump strategy will compel the Taliban to reconcile with the government. It said it's difficult to measure the plan's effectiveness because useful pieces of information -- such as Afghan military casualty rates -- are being withheld from public release at the request of the Afghan government.

Also withheld from public release, the report said, are data on the size, status and combat readiness of Afghan security forces. The U.S.-led coalition also "classified or otherwise restricted information" about the possible creation of a new Afghan National Army militia force, it said.

"This force is designed to be an evolution of the Afghan Local Police which has a mixed record of improving security in some areas and committing human rights abuses in others," the report said.

The report appeared skeptical of U.S. military assertions that the tide of battle has turned against the Taliban. Gen. John Nicholson, the top U.S. commander in Kabul, told reporters in November, "we have turned the corner," with the Taliban changing their tactics from trying to seize control of district population centers to "guerrilla-style warfare," which he defined as suicide attacks designed to maintain relevance and to inflict casualties without gaining new terrain.

The report said that in 2011-2013, U.S. commanders and officials had made similar claims of Taliban weaknesses.

"The insurgents went on to expand their control of Afghan territory," it said, as U.S. and international forces withdrew from direct combat at the end of 2014. Trump's strategy gives the U.S. expanded authorities to conduct offensive operations.

"The Taliban has a history of adapting to changing conditions and shifting their tactics in response to operations against them," the report said, "and changes in Taliban operations do not necessarily signal that momentum has irreversibly shifted."

It added: "Overall, the security situation throughout Afghanistan remained a stalemate" at the end of 2017. The report published a pie chart showing that as of Oct. 31 last year, 64 percent of the Afghan population was under government control or influence; 12 percent was under Taliban control or influence, and the rest was "contested."

The report also described a dim picture for the international humanitarian relief work that is being done in Afghanistan, which has more than 1.9 million displaced people in need of assistance such as shelter, food and health care.

The U.S. Agency for International Development, which participated in producing the report, said that during the final three months of 2017, humanitarian assistance was against impeded by military operations, security threats "throughout the country," violence against humanitarian providers and facilities, and restriction of movement in the country.