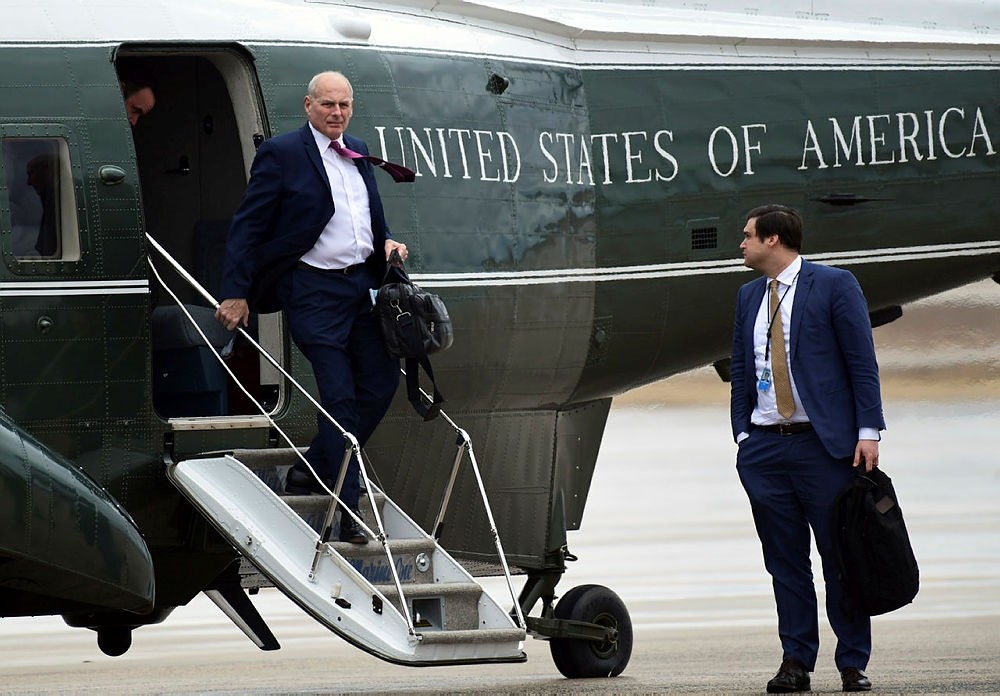 Under pressure over his handling of abuse allegations against a top aide, White House chief of staff John Kelly has ordered sweeping changes in how the White House clears staff members to gain access to classified information, acknowledging that the administration "must do better" in how it handles security clearances.

Kelly issued a five-page memo Friday that acknowledged White House mistakes but also put the onus on the FBI and the Justice Department to provide more timely updates on background investigations, asking that any significant derogatory information about staff members be quickly flagged to the White House counsel's office.

The issue has been in the spotlight for more than a week after it was revealed that former staff secretary Rob Porter had an interim security clearance that allowed him access to classified material despite allegations of domestic violence by his two ex-wives.

"Now is the time to take a hard look at the way the White House processes clearance requests," Kelly wrote in the memo. "We should — and in the future, must — do better."

The memo said the FBI and Justice Department had offered increased cooperation and, going forward, all background investigations of top officers "should be flagged for the FBI at the outset and then hand-delivered to the White House Counsel personally upon completion. The FBI official who delivers these files should verbally brief the White House Counsel on any information in those files they deem to be significantly derogatory."

Dozens of White House aides have been working under interim clearances for months, according to administration officials, raising questions about the administration's handling of the issue and whether classified information has been jeopardized.

Kelly's plan would limit interim clearances to 180 days, with an option to extend them another 90 days if background checks had not turned up significant troubling information. The memo also recommends that all Top Secret and SCI (Sensitive Compartmented Information) clearances that have been pending since last June be discontinued in a week.

That change could potentially put at risk the clearance of Jared Kushner, the president's son-in-law and a powerful senior adviser. Kushner's attorney, Abbe Lowell, told The Associated Press this week that Kushner has been working on an interim clearance for more than a year as his background check was being conducted.

Lowell said again Friday that "there are a dozen or more people at Mr. Kushner's level whose process is delayed" and "it is not uncommon for this process to take this long in a new administration."

He added, "The new policy announced by General Kelly will not affect Mr. Kushner's ability to continue to do the very important work he has been assigned by the President." But Lowell did not respond to questions about whether Kushner's clearance would be stripped or whether his role would require him to avoid looking at documents for which he did not possess clearance.

A White House spokesman did not immediately respond to a request for comment about Kushner's situation.

The memo is addressed to White House counsel Don McGahn, who has also been criticized for his role in the Porter matter, as well as national security adviser H.R. McMaster. Copies were sent to Attorney General Jeff Sessions, Director of National Intelligence Daniel Coats and FBI Director Christopher A. Wray.

At the State Department, interim clearances are granted by Diplomatic Security after a review of an employee's completed SF-86 questionnaire and initial checks of public records, a State official said. If any derogatory information turns up, no interim clearance is issued and the worker must wait until the full investigation is finished, said the official, who wasn't authorized to discuss the clearance process and demanded anonymity.

The White House has struggled to explain its handling of the Porter matter, offering several versions of events in recent days.

McGahn was apprised of at least some of the accusations about Porter at least four times, including as early as January 2017, according to White House officials familiar with the matter who spoke on condition of anonymity to discuss internal matters. In November, one official said, one of Porter's ex-girlfriends called McGahn to describe allegations of domestic abuse by the aide. Kelly, meanwhile, said he first learned something was wrong with Porter's clearance in November.

Trump officials have faulted the FBI and the White House Personnel Security Office for not passing along sensitive information about Porter. The staff secretary, who had access to classified documents delivered to the president, maintained his interim clearance until he resigned last week.

A sense of unease about Kelly's fate has persisted in recent days.

For months, Kelly — with help from Porter — had established a semblance of stability in a White House often rattled by an unpredictable president. That has eroded in a week's time, as accounts about the handling of the Porter matter continue to shift and some aides came to believe Kelly lied to save face and save his job.

Trump has complained to confidants that Kelly let the scandal spin out of control and that the constantly shifting narratives made the White House — and, by extension, Trump himself — look amateurish and incompetent, according to one person familiar with the discussions but not authorized to talk about them publicly.

The president has floated names of possible replacements but there was no sign that a move was imminent. The president is known to frequently poll his advisers about the performance of senior staff but is often reluctant to actually fire aides.

In the memo, Kelly defended his handling of clearances, including his order in September to cease granting new interim clearances unless the chief of staff had given his blessing.