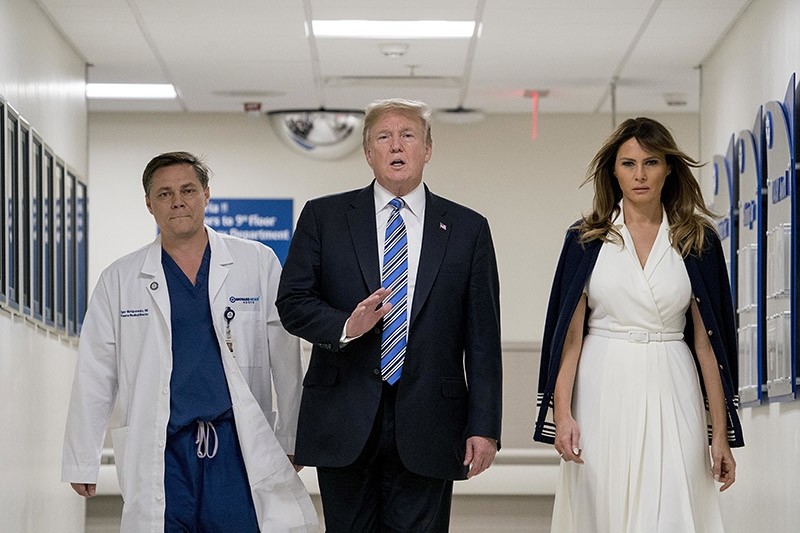 US President Donald Trump on Friday visited a Florida hospital to offer comfort to those wounded in a mass school shooting, after the FBI admitted it mishandled a tip about the troubled teen behind the massacre that left 17 dead.

The arrival of Trump and his wife Melania came at the end of a difficult day for the families of those killed in Wednesday's rampage at a high school in Parkland, Florida, who learned that the carnage could perhaps have been averted.

The FBI, the top US law enforcement agency, admitted it had received a chilling warning in January from a tipster who said the 19-year-old gunman, Nikolas Cruz, could be planning a mass shooting, but that agents had failed to follow up.

At Broward Health North Hospital, where Trump met with survivors of the shooting, the president thanked the doctors, nurses and first responders for their "incredible" work, and described the carnage as "very sad."

He and his wife then headed to the Broward County sheriff's office, where they met with Florida Governor Rick Scott, Senator Marco Rubio, Sheriff Scott Israel and other law enforcement officers.

Trump told the group he had met with a female survivor who had been shot four times, including in the lung, adding that quick first responders had saved her life.

The president's visit to the Parkland area north of Miami came amid growing anger among parents and students at Marjory Stoneman Douglas High School over America's seeming unwillingness to toughen gun control laws.

"My princess wasn't safe in that school," said Andrew Pollack, speaking at the funeral of his 18-year-old daughter Meadow.

"Please pray that this horrific tragedy never happens to another family."

At the evening briefing at the sheriff's department, Rubio said: "This is a community and a state that is in deep pain and they want action to make sure this doesn't happen again."

Trump replied: "You can count on it."

The FBI made a stunning admission earlier in the day, saying a "person close to Nikolas Cruz" made a call to the agency's public tipline on January 5 to "report concerns about him."

"The caller provided information about Cruz's gun ownership, desire to kill people, erratic behavior, and disturbing social media posts, as well as the potential of him conducting a school shooting," the FBI said in a statement.

The information from the caller "should have been assessed as a potential threat to life" and forwarded to the agency's Miami field office, it said.

Instead, "no further investigation was conducted."

"We have spoken with victims and families, and deeply regret the additional pain this causes all those affected by this horrific tragedy," said Federal Bureau of Investigation director Christopher Wray, who took up his post in August.

Wray said he was "committed to getting to the bottom of what happened," and Attorney General Jeff Sessions ordered an immediate review to ensure "effective response to indications of potential violence."

But Scott, the state governor, nevertheless called for the FBI chief to step down, saying the failure to act was "unacceptable."

"Seventeen innocent people are dead and acknowledging a mistake isn't going to cut it," Scott said.

The January warning to the FBI was not the first it had received about Cruz, who used an AR-15-style semi-automatic rifle that he legally purchased a year ago to spray classrooms with bullets.

In September, the FBI was alerted to a message posted on YouTube, in which a user named Nikolas Cruz vowed: "I'm going to be a professional school shooter."

The FBI said it had looked into it at the time but was unable to identify the person who made the post.

Cruz was also known to local police after his mother "repeatedly called police to the home to help deal with his violent outbursts, threats and self-destructive behavior," over the course of several years, according to CNN.

The police incident reports are as recent as September 2016 and one noted "He has mentioned in the past that he would like to purchase a firearm," the network said.

Trump's visit to the Parkland area, not far from his Mar-a-Lago resort, where he will spend the long President's Day weekend, was not announced in advance, perhaps because he risked being greeted with angry demands for action on gun laws.

"It's illogical that the law says a minor can't have a drink, but can buy a gun," said 47-year-old Mavy Rubiano, whose child survived the shooting.

In Washington, the political response so far makes it clear that the powerful pro-gun National Rifle Association, which spent $30 million to support Trump's election in 2016, remains formidable.

As with previous mass shootings, the focus of gun control advocates was the easy availability of the AR-15, a civilian version of the US military's M16.

Millions have been sold around the United States, and AR-15-style rifles were used in the mass shootings in Las Vegas, Sutherland Springs, Texas and Newtown, Connecticut.