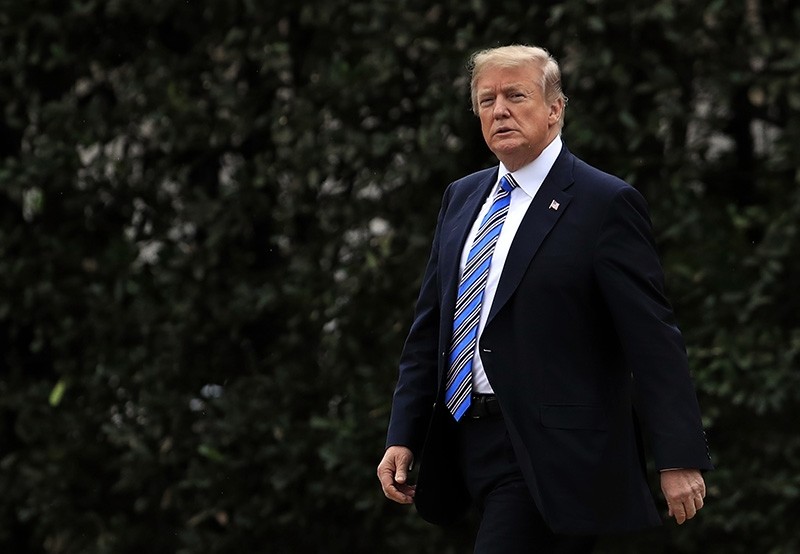 President Donald Trump walks from the Oval Office as he leaves the White House, Friday, Feb. 16, 2018, in Washington, for a trip to his private Mar-a-Lago resort in Florida. (AP Photo)
by Compiled from Wire Services Feb 20, 2018 12:00 am

U.S. President Donald Trump on Tuesday denied allegations by a former receptionist that he had kissed her without her consent in an elevator lobby of Trump Tower, calling the story "another false accusation."

Trump was reacting to a front-page report in The Washington Post on how Rachel Crooks, who first made the allegations public before the 2016 elections, has doggedly continued to stand by her story in public appearances, despite not knowing if it will ever make any difference.

Crooks says that in 2006, when she was a 22-year-old receptionist working for an investment firm located in Trump Tower, she introduced herself to the then 59-year-old real estate tycoon as he waited for an elevator outside her office.

She said she approached him with her hand out, and he grabbed it and started kissing her.

"He started kissing me on one cheek, then the other cheek," the newspaper quoted her as telling a group of women. "He was talking to me in between kisses, asking where I was from, or if I wanted to be a model. He wouldn't let go of my hand, and then he went right in and started kissing me on the lips."

She said the incident lasted around two minutes.

Trump hit back at the allegations on Twitter, saying, "A woman I don't know and, to the best of my knowledge, never met, is on the FRONT PAGE of the Fake News Washington Post saying I kissed her (for two minutes yet!) in the lobby of Trump Tower 12 years ago. Never happened!"

"Who would do this in a public space with live security cameras running," he added, asking why The Washington Post had not reported "the story of the women taking money to make up stories about me?"

In response to Trump's tweet, Crooks said on Twitter that Trump should release "the footage from the hallway outside the 24th floor residential elevator bank on the morning of January 11, 2006."

"Let's clear this up for everyone. It's liars like you in politics that have prompted me to run for office myself," she wrote in the tweet, referring to her decision to challenge Republican Bill Reineke for his seat in the state legislature of Ohio.

Trump, who was captured on a 2005 audio recording bragging about grabbing women by the genitals, is also fending off a defamation lawsuit by one alleged victim after he said accusations against him were politically motivated "lies."

Nineteen women have come forward to accuse the president of sexual misconduct over a period of several decades. Trump's angry denials on Twitter have often served only to exacerbate the debate over his behavior towards women.