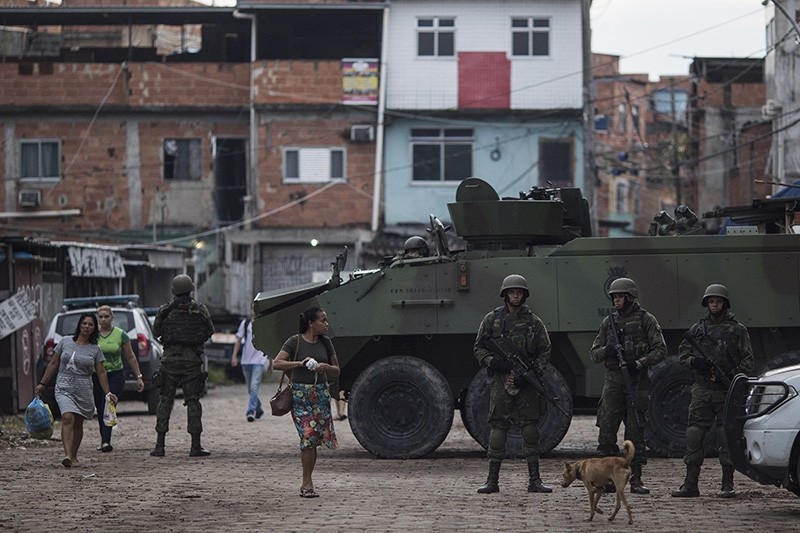 Brazilian marines stand in guard next to an armored vehicle a during surprise operation in Kelson's slum in Rio de Janeiro, Brazil, Tuesday, Feb. 20, 2018. (AP Photo)
by Compiled from Wire Services Feb 21, 2018 12:00 am

Brazil's Senate overwhelmingly approved the takeover by the army of Rio de Janeiro's security following a breakdown of law and order in drug-ravaged neighborhoods.

Despite criticism that the military intervention could lead to violations of constitutional rights, while also failing to address the causes of the urban violence, the Senate voted late Tuesday by 55 to 13, with one abstention, in favor.

Center-right President Michel Temer issued the decree, which put the army in charge of all Rio's policing, on Friday. The Senate approved the decree overnight, following approval by the Chamber of Deputies earlier on Tuesday. While regular police are still doing most of the work on the streets, generals are now in command, with troops available as back-up. Police and the army are already staging joint patrols in slums in the city of Rio de Janeiro and on access roads to the state.

Defence Minister Raul Jungmann however said that the army would not have a "free hand," amid uncertainty about how far its authority extended.

The state of Rio de Janeiro registered 40 violent deaths per 100,000 residents last year, the highest figure since 2009, according to official data. About 230,450 robberies were also recorded.

However, the trigger for the decision to send in the army appears to have been a wave of street robberies during the recent carnival festivities that were given heavy media coverage.

"When we see delinquents holding up a street stall with a rifle we can see how serious the situation is. The population lives in terror," said Senator Eduardo Lopes, who led the Senate support for the decree.

The military intervention is the first of its kind since Brazil returned to democracy in 1985 after two decades of dictatorship.

Although many support a crackdown, critics worry that the mission has been poorly defined and could lead to abuses.

There are also criticisms that years of heavy-handed policing in the favelas, including numerous army-backed operations, have done nothing to resolve problems rooted in poor education and stunning inequality.

There is particular controversy over government calls for the army-led police to be able to serve mass search and arrest warrants in favelas.

"The penal code does not authorize serving collective or generic search warrants. On the contrary, it demands the greatest possible precision in the homes being searched," he tweeted.

Overnight, the armed forces and police spread out in Rio in the first major operation since the change in command. They took up positions on major roads that connect Rio with the rest of the country in an effort to prevent drugs, illegal arms and stolen goods from entering the city, said Col. Roberto Itamar, a military spokesman. Around 3,000 members of the armed forces were involved.

Armored vehicles rolled through the streets of one neighborhood on Guanabara Bay on Tuesday, while boats patrolled the waters. Soldiers and police set up checkpoints and searched everyone leaving or entering during the morning commute.

By Tuesday evening, 11 people had been detained and six guns, six grenades and a large quantity of drugs had been seized, the state security department said.

The operation was planned before the new military commander took over, and he has yet to lay out his plan for tackling the wave of violence in Rio. But Itamar said the military intervention would go beyond the mere use of soldiers in the streets.

"The population will see an improvement in the actions of the institutions that are constitutionally responsible for public security in Rio de Janeiro," he said in an interview with The Associated Press.

Security in Rio has been deteriorating for at least two years as the state experiences a deep fiscal crisis. Rio's governor, Luiz Fernando Pezao, said a stronger economy would be crucial to combatting crime in Rio.

"We will only win the security war with formal sector jobs," he said Tuesday.

Whereas the approval of the decree prevents Brazil from approving a key pension reform, because changes to the constitution such as those needed for the unpopular entitlements overhaul cannot be legally completed during a federal intervention.