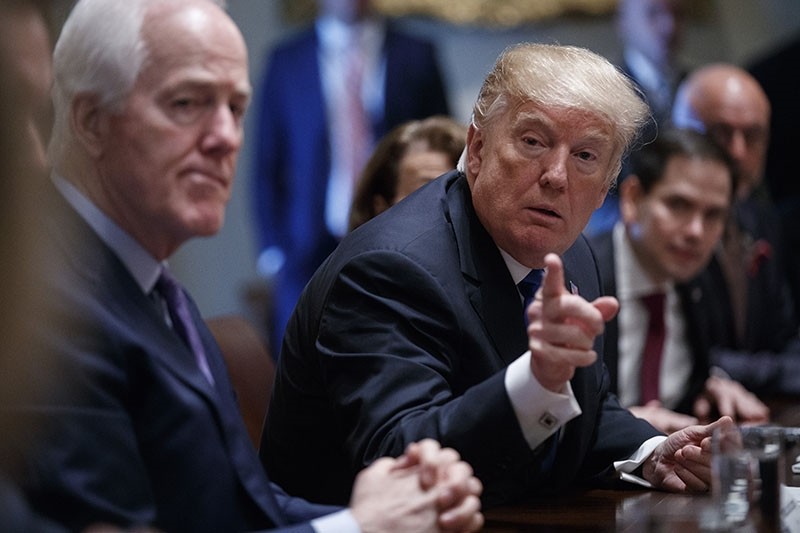 US President Donald J. Trump delivers remarks during a meeting with bipartisan Members of Congress to discuss school and community safety in the Cabinet Room of the White House in Washington, DC, Feb. 28, 2018. (EPA Photo)
by Associated Press Mar 01, 2018 12:00 am

Large numbers of Americans say they think President Donald Trump's policies have made things worse for African-Americans, Hispanics and Muslims. And more than half say the president himself is a racist.

Fifty-seven percent of all adults say they think Trump is a racist. The poll finds that 85 percent of Democrats consider Trump racist, but just 21 percent of Republicans agree.

Trump has rejected accusations of racism, telling reporters at one point, "I am the least racist person you have ever interviewed."

How the AP-NORC poll on race relations was conducted

The Associated Press-NORC Center for Public Affairs Research poll on progress for African-Americans was conducted by NORC from Feb. 15-19. It is based on online and telephone interviews of 1,337 adults who are members of NORC's nationally representative AmeriSpeak panel.

The poll includes a total of 388 black respondents, who were sampled at a higher rate than their proportion of the population for purposes of analysis. For results reported among all adults, responses among blacks are weighted to reflect their proportion among all U.S. adults.

The original sample was drawn from respondents selected randomly from NORC's National Frame based on address-based sampling and recruited by mail, email, telephone and face-to-face interviews.

NORC interviews participants over the phone if they don't have internet access. With a probability basis and coverage of people who can't access the internet, surveys using AmeriSpeak are nationally representative.

Interviews were conducted in English and Spanish.

As is done routinely in surveys, results were weighted, or adjusted, to ensure that responses accurately reflect the population's makeup by factors such as age, sex, race, education, region and phone use.

There are other sources of potential error in polls, including the wording and order of questions.